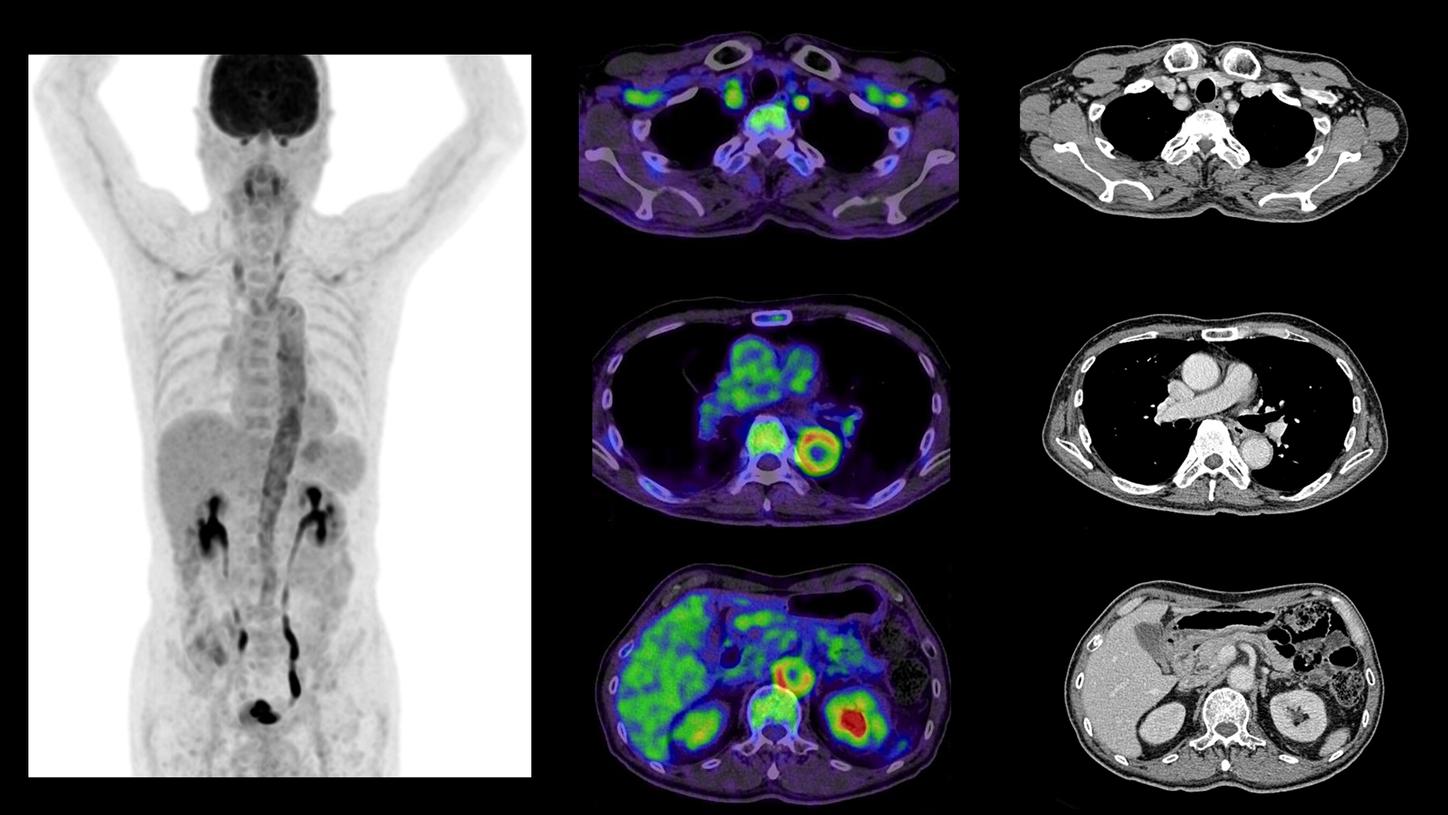 A 63-year-old man with a history of coronary artery disease and atherosclerotic narrowing of carotid vessels presented with occasional chest pain along with a fever of long duration. In view of the possibility of diffuse cardiovascular disease, the patient underwent PET/CT performed on a Biograph™ mCT. Following a low-dose non-contrast CT, a whole-body PET scan was performed from the top of head to the upper thigh and PET data was reconstructed using ultraHD•PET (time-of-flight [ToF] and point spread function [PSF] reconstruction combined) at a 200 x 200 matrix.

The PET/CT images showed a clear uptake of the tracer on the artery such as the aorta, carotid artery, and subclavian artery, suggesting vasculitis. These findings were difficult to point out in a contrast-enhanced CT performed on the same day (Figure 1). Interestingly, the PET/CT study also demonstrated a characteristic accumulation of the tracer on the bilateral temporal arteries, which implies temporal arteritis (Figure 2). The diagnosis was subsequently confirmed by the result of the biopsy of a temporal artery.

Cardiovascular diseases are often presented with symptoms related to heart as well as vascular manifestations. Vasculitis is often present together with coro nary artery disease. It is often difficult to diagnose vasculitis at an early stage by using the conventional morphological imaging such as CT. Abnormal vascular hypermetabolism seen in PET/CT is often reflective of vasculitis at an early stage before irreversible morphological change of the artery. Vascular uptake in PET/CT provides the physician an overview of the inflammation within the entire cardiovascular system, especially arteries, which is key to systemic evaluation of cardiovascular disease. Although uptake in large arteries are well delineated on PET/CT, it is often difficult to visualize low level of uptake as is often seen in inflammation of smaller vessels such as temporal arteries.1 However, with the development of PET reconstructions in recent years such as ToF and PSF, detection capability of small lesions has increased. In the present case,an incidental finding of a small lesion of the temporal artery detected due to the improved spatial resolution and lesion contrast obtained because of ToF and PSF helped identify peripheral cardiovascular disease (temporal arteritis). Improved lesion contrast achieved by ToF and PSF along with overall high count rate capability of the Biograph mCT enable high resolution PET imaging with higher matrix reconstructions which result in smaller voxels for improved definition of low intensity focal uptake within arterial walls reflecting arteritis.

In a patient with diffuse cardiovascular disease, PET/CT demonstrated an incidental finding of focal hypermetabolism in bilateral temporal arteries which suggested presence of temporal arteritis.

Gostaria de fornecer um feedback detalhado?
125 / 125
1
M. Brodmann, R. W. Lipp, A. Passath, G. Seinost et al. The role of 2-18F-fluoro-2-deoxy-D-glucose positron emission tomography in the diagnosis of giant cell arteritis of thetemporal arteries. Rheumatology 2004;43:241–242.
The outcomes by Siemens Healthineers customers described herein are based on results that were achieved in the customer’s unique setting. Since there is no “typical” hospital and many variables exist (e.g., hospital size, case mix, level of IT adoption) there can be no guarantee that other customers will achieve the same results.