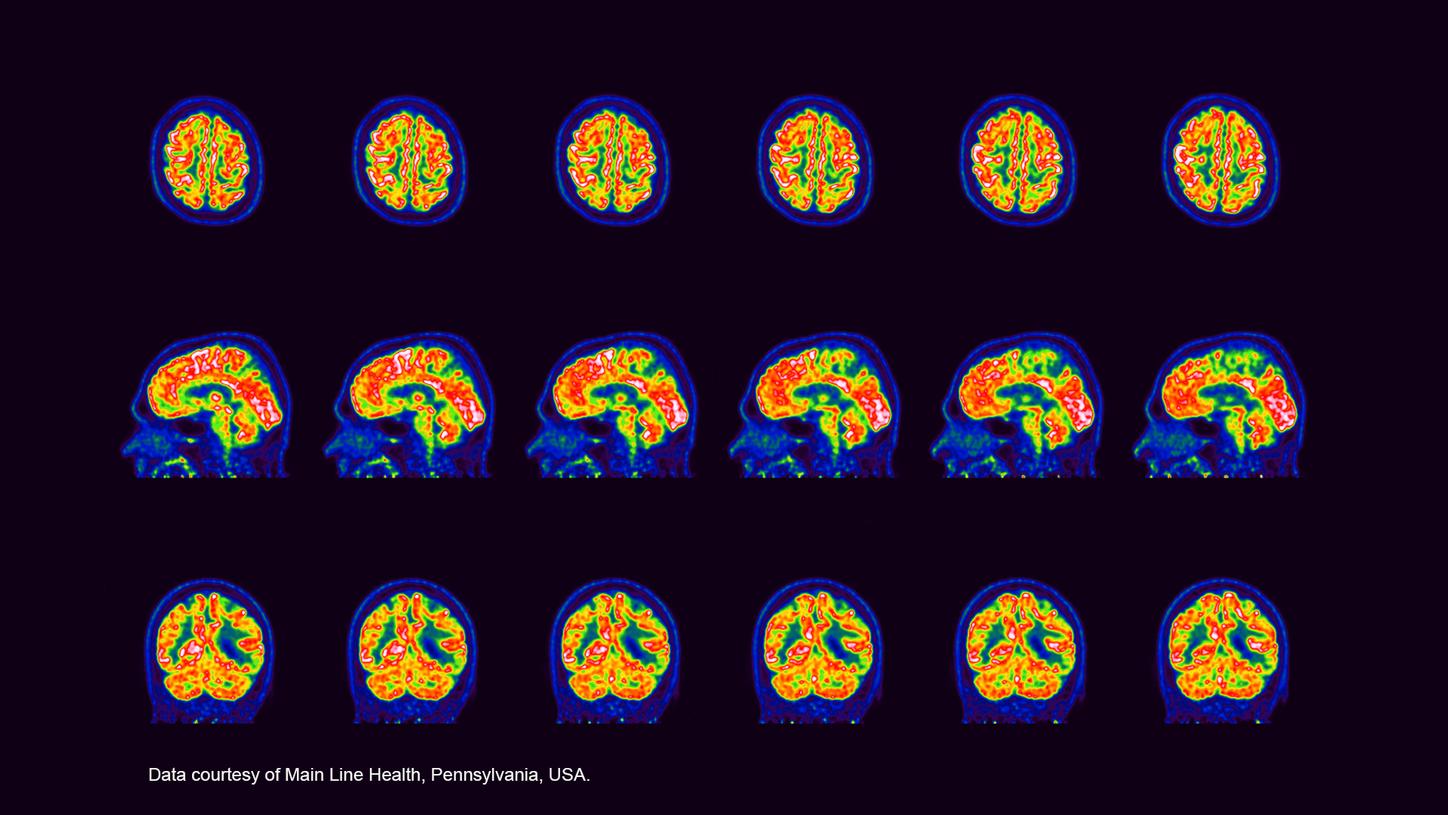 A growing number of senior citizens across the globe, as well as the spectrum of society, are affected by dementia due to Alzheimer’s disease (AD). According to the World Health Organization, currently more than 55 million people live with some form of dementia worldwide, 60-70% of which is attributed to AD.1 At first, the onset of cognitive decline can be as subtle as a change in mood or irritability. Many start to suffer from symptoms, such as impairment in linguistic skills, much sooner than receiving their official diagnoses of dementia.

“Accumulation of senile plaques in the brain is the first recognizable sign of Alzheimer’s dementia, followed by neuroinflammation and tauopathy. Beyond that, it starts to affect brain anatomy by neurodegeneration,” says Babak Tousi, MD, a neuro-geriatrician at a world-renowned brain health center based in the midwestern United States. Conventional diagnosis of AD requires exclusion of other potential underlying conditions, making distinctions of similar dementia symptoms and cognitive profiles difficult. Recently, biological factors were added to the AD definition, such as the presence of specific protein abnormalities in the brain. More specifically, these abnormalities include extracellular deposition of amyloid plaques and aggregation of intracellular neurofibrillary tangles due to hyperphosphorylated tau proteins. Amyloid is a generic name of protein debris. In the case of AD, a receptor protein on the neuron called amyloid precursor protein (APP) breaks down into small peptide fragments, and the delayed clearance and aggregation of such debris would cause functional impairment in neurons.2

“We’re talking about breakdown of APP, releasing monomers, monomers attaching to each other to form oligomers, and oligomers to protofibrils and ending up as amyloid plaques. These senile plaques then set out the inflammatory process and tau fibrils,” Tousi explains. This idea of disease progression, wherein amyloid accumulation triggers the cascade of neurodegenerative events, is called amyloid hypothesis.3 “Over the last couple of decades, most of the research for discovery of disease-modifying therapies was focused on somehow manipulating the cycle of events associated with amyloid pathology. For example, some of those developments focused on beta-secretase and gamma-secretase, enzymes that break down amyloid precursor proteins. Unfortunately, these studies were unsuccessful.”

This lack of pharmacological intervention, progressive devastation in quality of life, and the associated social costs have propelled the recent drug discovery and clinical development in AD. “There are three different types of pharmacological therapies currently available for Alzheimer’s disease: cognitive enhancers like the cholinesterase inhibitor family and an N-methyl-D-aspartic acid (NMDA) receptor antagonist, medications for management of neuropsychiatric symptoms, and more recently disease-modifying monoclonal antibodies that most of our current research is focused on,” explains Tousi.

The loss of neuronal communication mediated by a neurotransmitter acetylcholine is often observed in the Alzheimer’s brain. “First of all, drugs that can prevent the degradation of acetylcholine in the synapse are shown to provide modest improvement in cognition. The second category is antipsychotic or antidepressants. Such drugs may be administered to manage behavioral symptoms, such as depression, irritability, and agitation, but they will not reverse or slow down the progression of the disease,” Tousi explains. “The third category is about disease-modifying therapeutics. Recently, a therapeutic agent was approved based on the fact that it can decrease amyloid plaques in the brain. We continue to do more trials for this agent as a part of open label study and a new randomized clinical trial, so there’s going to be more safety and efficacy data.” 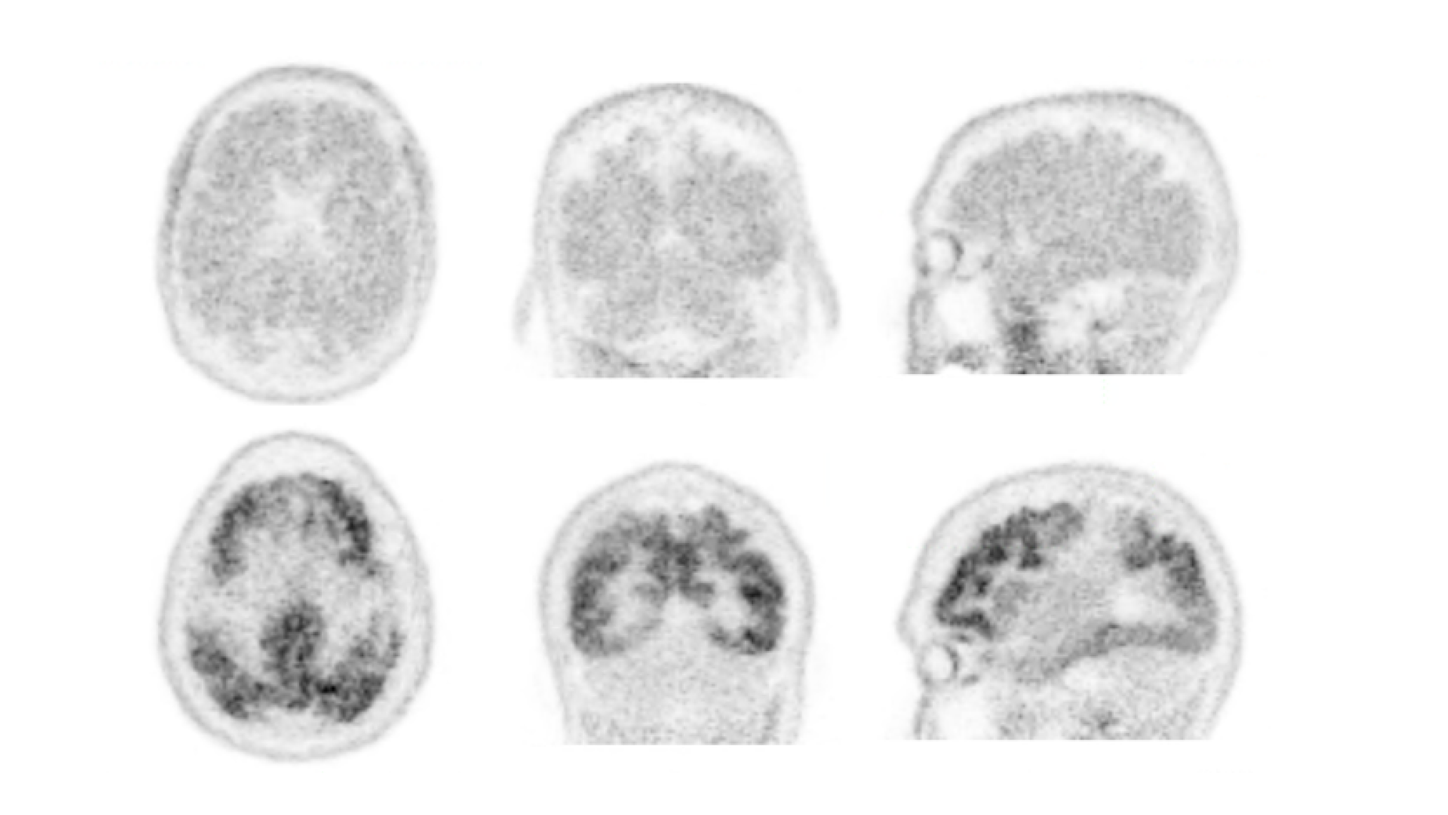 In PET brain imaging, radioactive imaging agent for specific targets—or biomarkers—are injected into the patient’s bloodstream, and in vivo accumulation of the biomarker is imaged under a PET camera. As such, the first signs of neuropathological changes can be detected without removal of the brain biopsy specimen. For cognitive disease related to AD, there are two kinds of PET biomarkers approved for clinical use. The first biomarker is an imaging agent used to estimate amyloid neuritic plaque density. Currently, there are three approved amyloid PET imaging biomarkers. The second biomarker targets aggregation of intracellular neurofibrillary tangles due to hyperphosphorylated tau proteins. The U.S. Food and Drug Administration (FDA) approved one such biomarker in May 2020.7

In current clinical trials, these Alzheimer’s imaging biomarkers are used for selecting the suitable patient population that may benefit from investigational drugs being tested. “Clinical trial participants undergo cognitive testing, but aside from that, they undergo amyloid imaging,” explains Tousi. “Based on how much amyloid plaque they have in their brains, they may be qualified to participate in trials to receive antiamyloid therapy.”

The PET biomarker for tau neurofibrillary tangles may have additional value. “Having more amyloid plaque in the brain doesn’t mean that the person is more forgetful than others, simply put. But it seems that the more tau spreading you see, the more likely a person declines in cognition. We have enough study to show that tau PET may reflect cognitive stages across the AD spectrum,” Tousi reports.

“I see some promising results with new anti-amyloid antibody agents under trial.”

Babak Tousi, MD
Neuro-geriatrician based in the midwestern United States 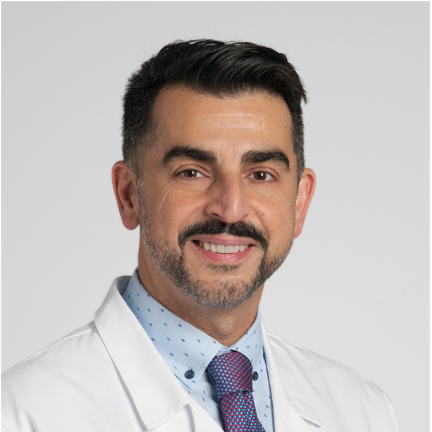 Babak Tousi, MD
Neuro-geriatrician based in the midwestern United States

Therapeutic trials across the spectrum

The current Alzheimer’s therapeutic trials are enrolling people with a very wide spectrum of cognitive states. “We have some trials for antiamyloid therapy agent for patients with mild cognitive impairment and earlier stage of Alzheimer’s dementia. We also have another multicenter trial in which a drug candidate is tested in healthy, at-risk subjects.” Tousi continues. “These are participants who may only have concerns about their memory problems because of their family history. Even before their symptoms start, they want to explore preventive treatments. For most trials, it is usually a requirement to have PET imaging to confirm the involvement of Alzheimer’s pathologies. Recent studies use amyloid imaging or tau imaging or a combination of both.” Imaging biomarkers therefore serve as a key tool to select target clinical trial participants.

The concept of image-based therapy personalization has been discussed for many years. In oncology, thyroid cancer, neuroendocrine tumors, and prostate cancer are good examples of how imaging can confirm pathologies and contribute to therapy planning. It is curious whether PET imaging also plays a role in determining the patient eligibility for AD therapeutic agents.

“We never had a treatment for AD that required more accurate diagnosis. But if there’s a treatment focused on amyloid pathology, then I think it’s more important to confirm such a problem exists before we start giving treatments,” Tousi says. “It brought up to the surface the fact that we need a biomarker for a diagnosis of Alzheimer’s. Biomarkers have not been a part of clinical diagnostic criteria.” Recently, the International Working Group for the clinical diagnosis of AD proposed including biomarker evidence of Alzheimer’s pathology for clinical diagnosis of AD.8 “We certainly know that there is a vascular component, inflammatory component, and comorbidities from synucleinopathy. A large percentage of patients with Lewy Body dementia may also have Alzheimer’s pathology in autopsy. DaTScan™ is another biomarker that we use to differentiate dementia of Lewy bodies and other types of dementia. If there are more selective biomarkers, they can be helpful.”

Many initial trials targeting removal of cerebral amyloid accumulation failed, leading many to question the validity of amyloid hypothesis. “I see some promising results with new anti-amyloid antibody agents under trial,” Tousi asserts. “These agents seem to remove amyloid plaques and show promising results in cognitive improvement. So, there is some validation coming for the amyloid hypothesis. I think we had the right hypothesis but didn’t have the right targets in the past.”

It appears that the recent development in PET imaging and antibody therapy agents are beginning to enable image-based therapy personalization for dementia. In particular, imaging may help stratify patients who are likely to respond to the treatment from those who do not. In combination with other biomarkers that can indicate the metabolic patterns of the brain or other confounding etiologies of neurodegenerative states, physicians now have a few more tools to make more specific diagnosis and to plan the most suitable treatment for AD.

The interview for this article was first conducted on January 26, 2022. Since that date, the article has been adjusted to reflect ever-changing developments in this area.

The statements by Siemens Healthineers customers described herein are based on results that were achieved in the customer’s unique setting. Since there is no “typical” hospital and many variables exist (e.g., hospital size, case mix, level of IT adoption), there can be no guarantee that other customers will achieve the same results.

The product names and/or brands referred to are the property of their respective trademark holders.