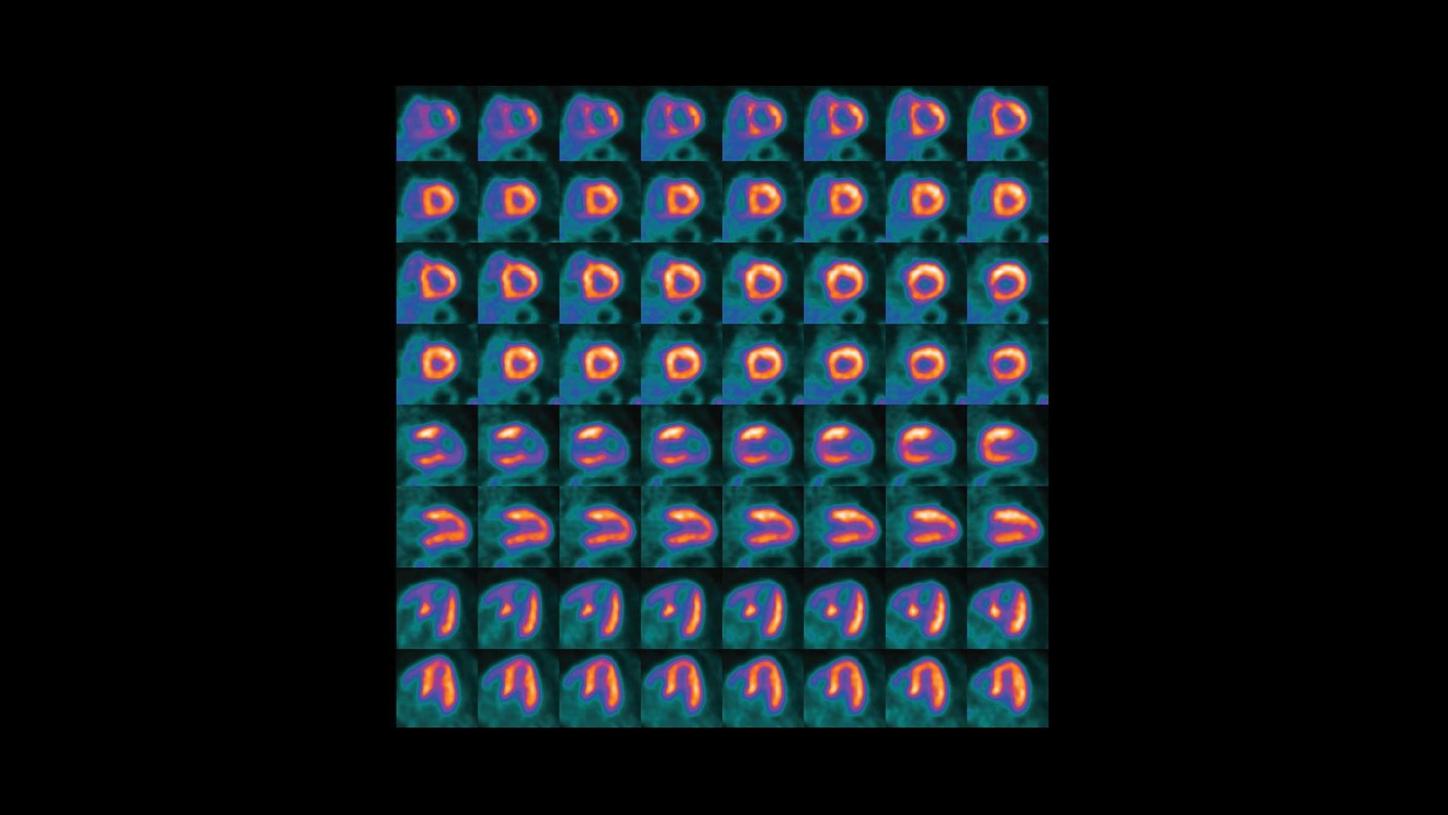 A 62-year-old female presented with atypical chest pain and a history of major risk factors for coronary artery disease (CAD), including obesity (high body mass index, height of 168 cm [5’5”], and a weight of 103 kg [227 lb]), hypertension, diabetes, hyperlipidemia, and a family history of CAD.

A low-dose CT was acquired prior to the rest image acquisition for attenuation correction (AC). 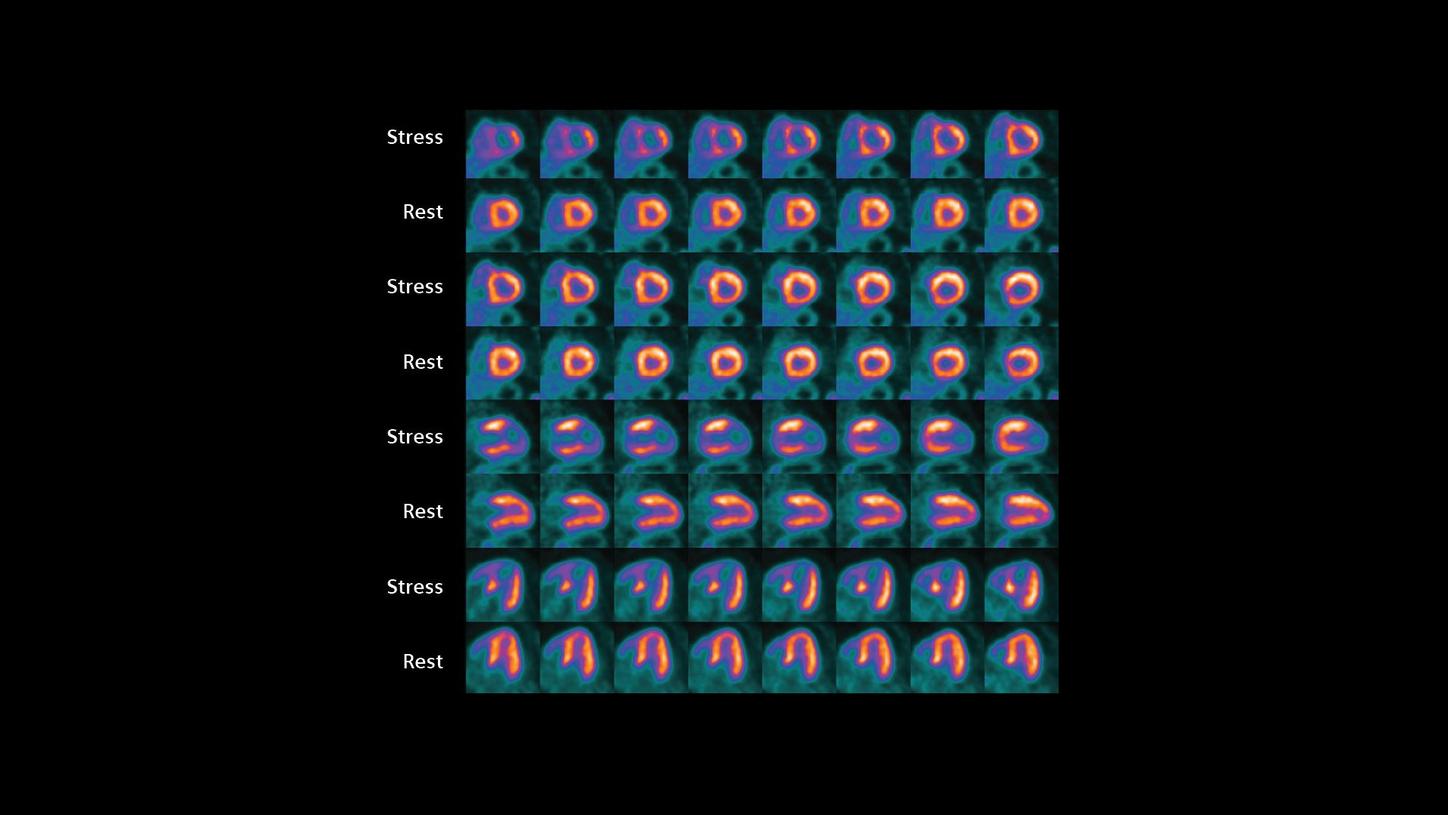 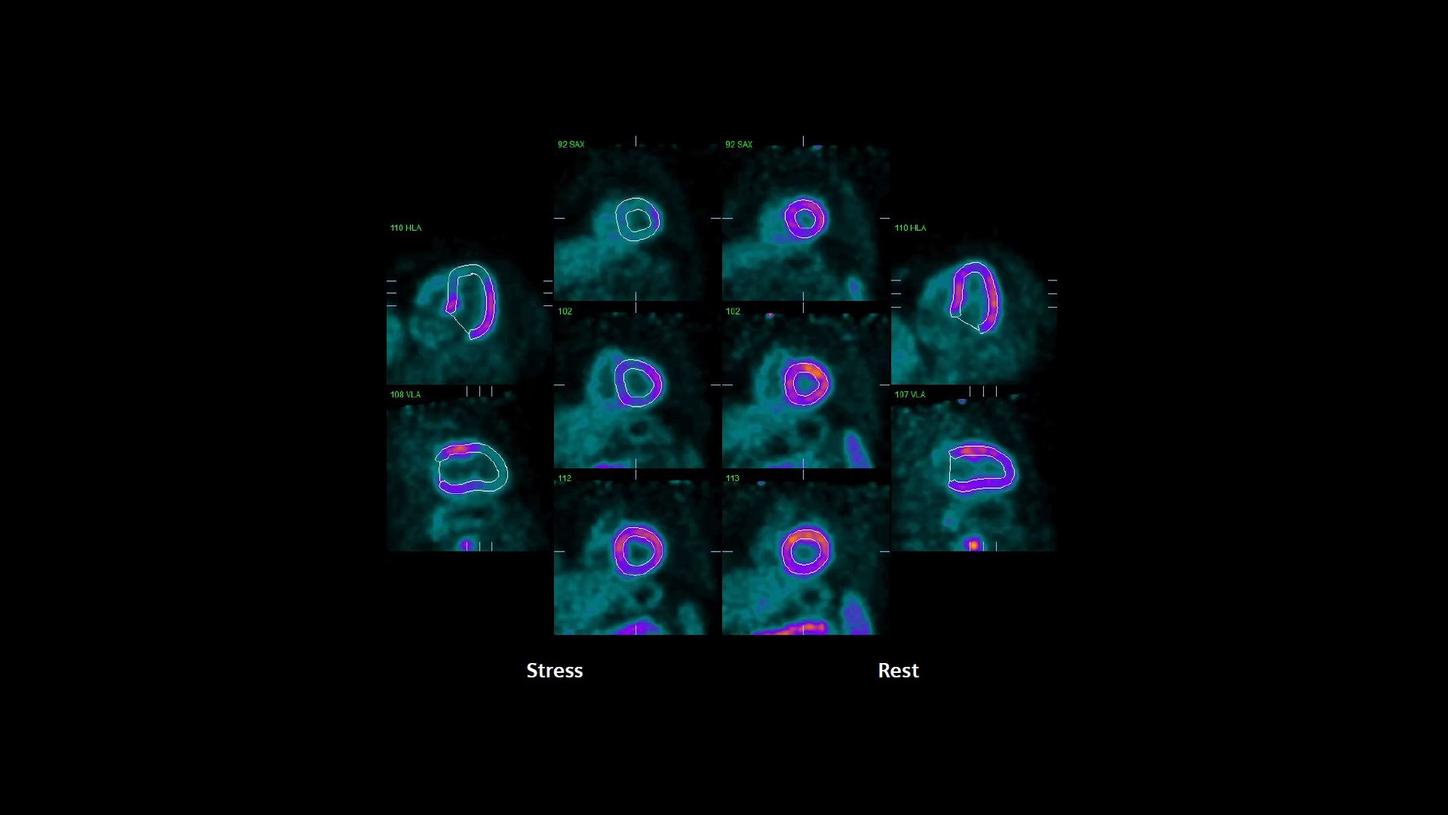 Figure 2: The end diastolic cross section of the left ventricle at stress and rest obtained from the gated PET studies shows LV dilation at peak stress along with severe hypoperfusion in the apex, periapical region, anterior wall, septum, and the inferolateral wall. The resting images show significantly reduced LV cavity size with normalization of perfusion in the LAD and RCA territory at rest. 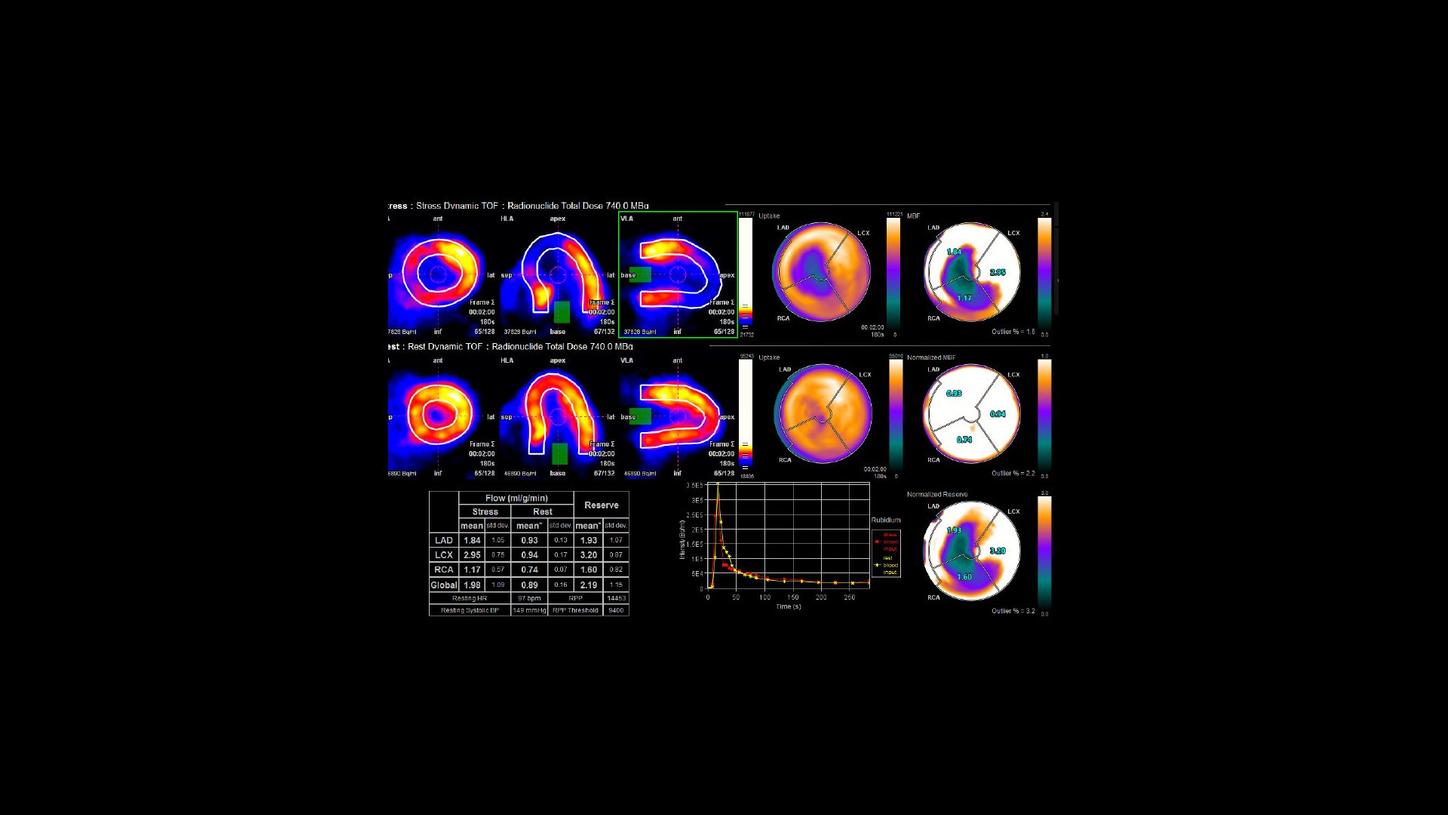 Figure 3: MBF estimation using syngo.via shows severely reduced blood flow at stress in the LAD and RCA territories with normalization of blood flow at rest with decreased MBFR in both territories. 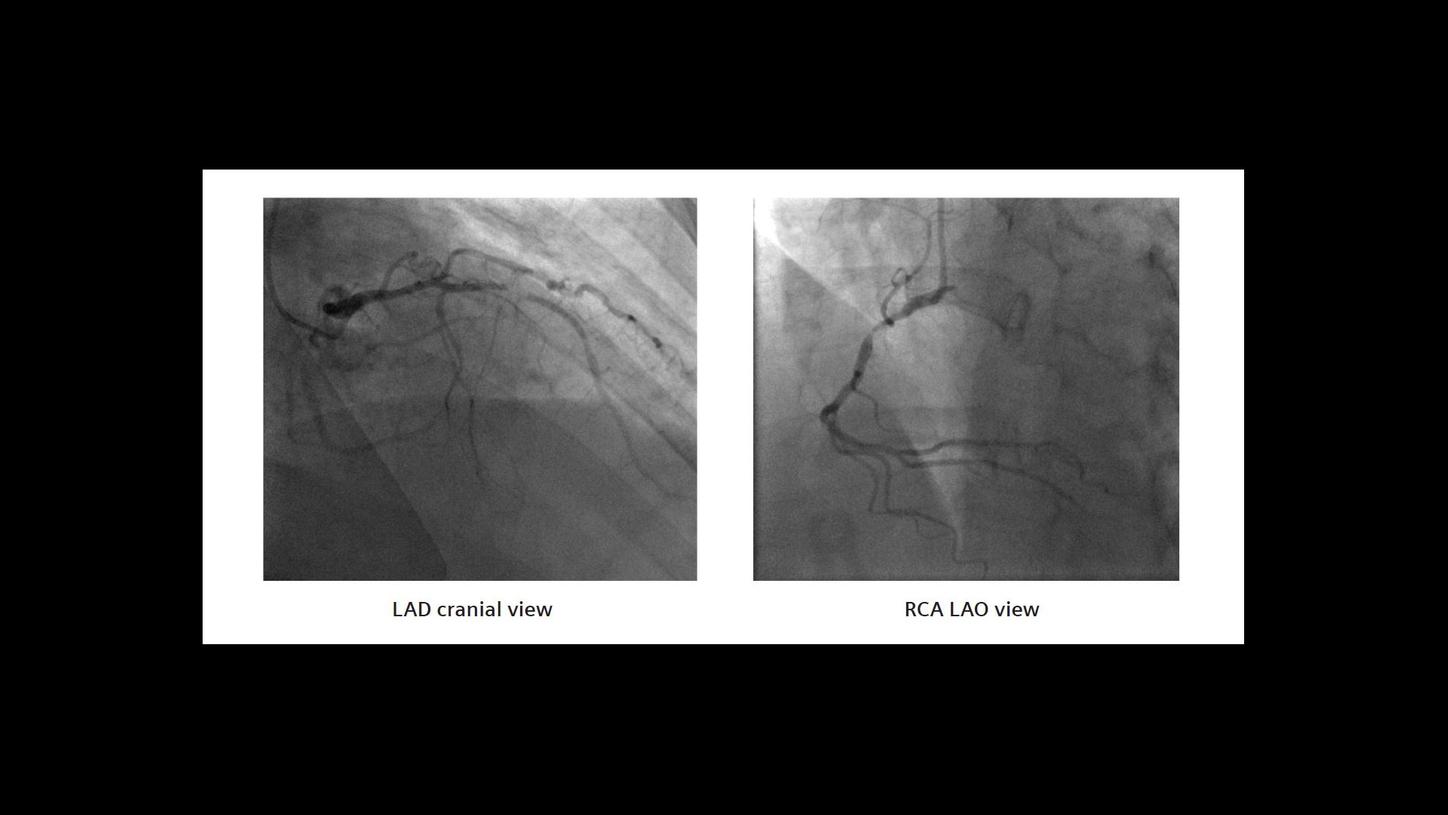 Figure 4: Coronary angiography shows severe stenosis in the mid-LAD as well as proximal-RCA. 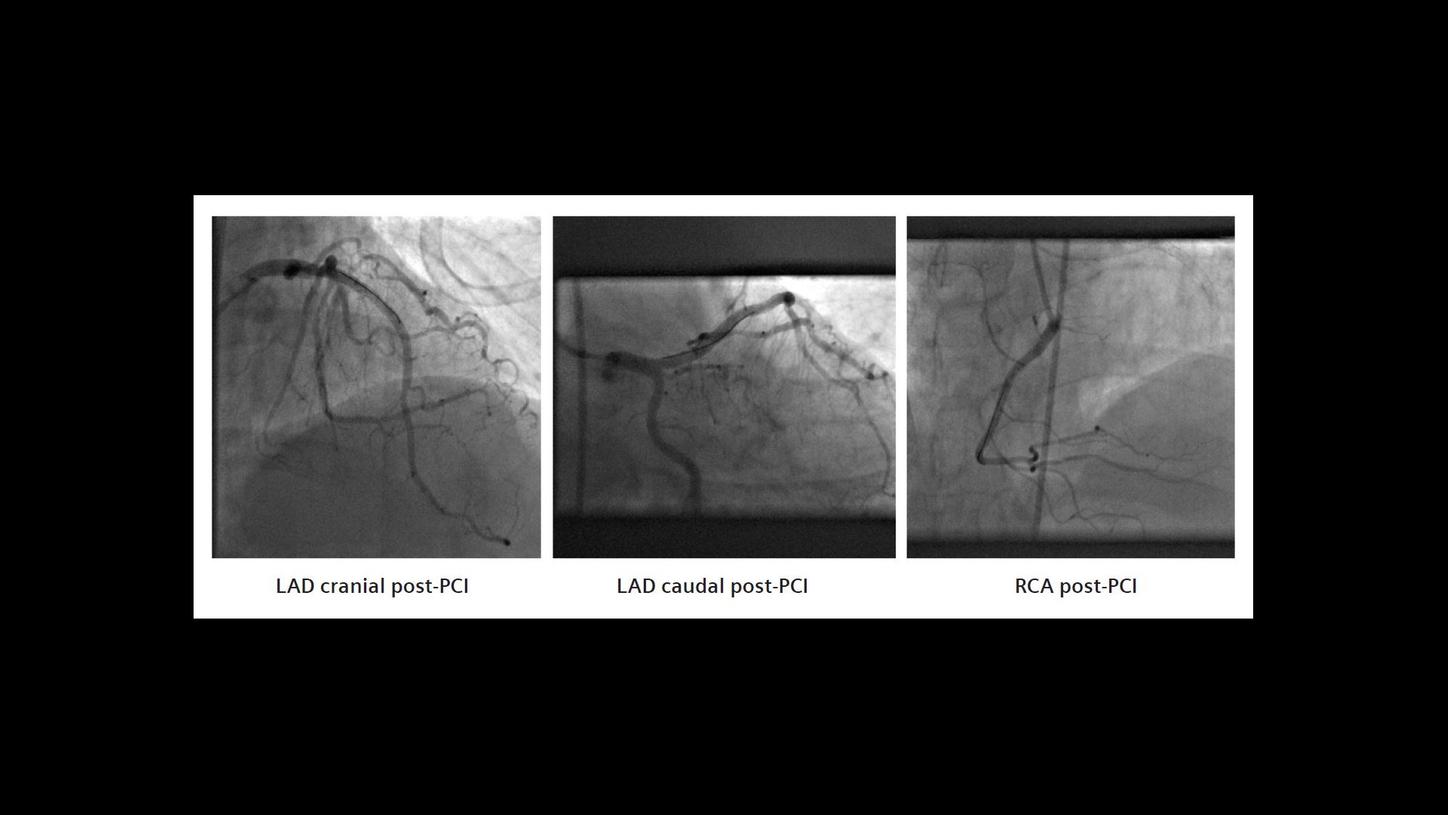 Figure 5: The post-PCI images show guidewires across the LAD and RCA stenotic segments with normal vascular flow in both coronary vessels reflecting successful angioplasty. However, coronary angiography revealed minor residual disease in the LCX (Figure 6) which was not treated. 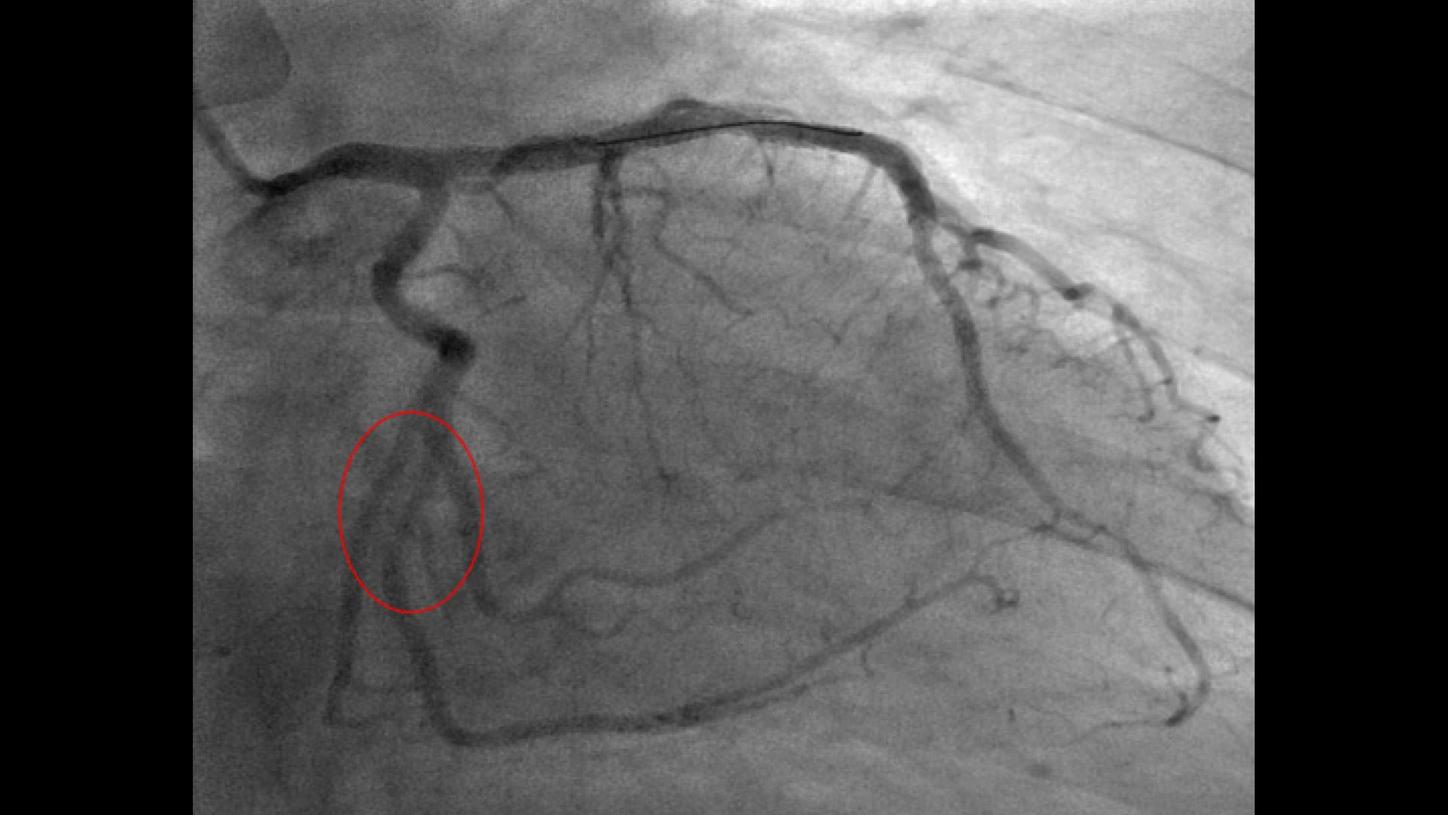 Figure 6: Post-PCI angiography shows minor residual CAD in mid-LCX artery as evident in the luminal irregularities defined within the circle. 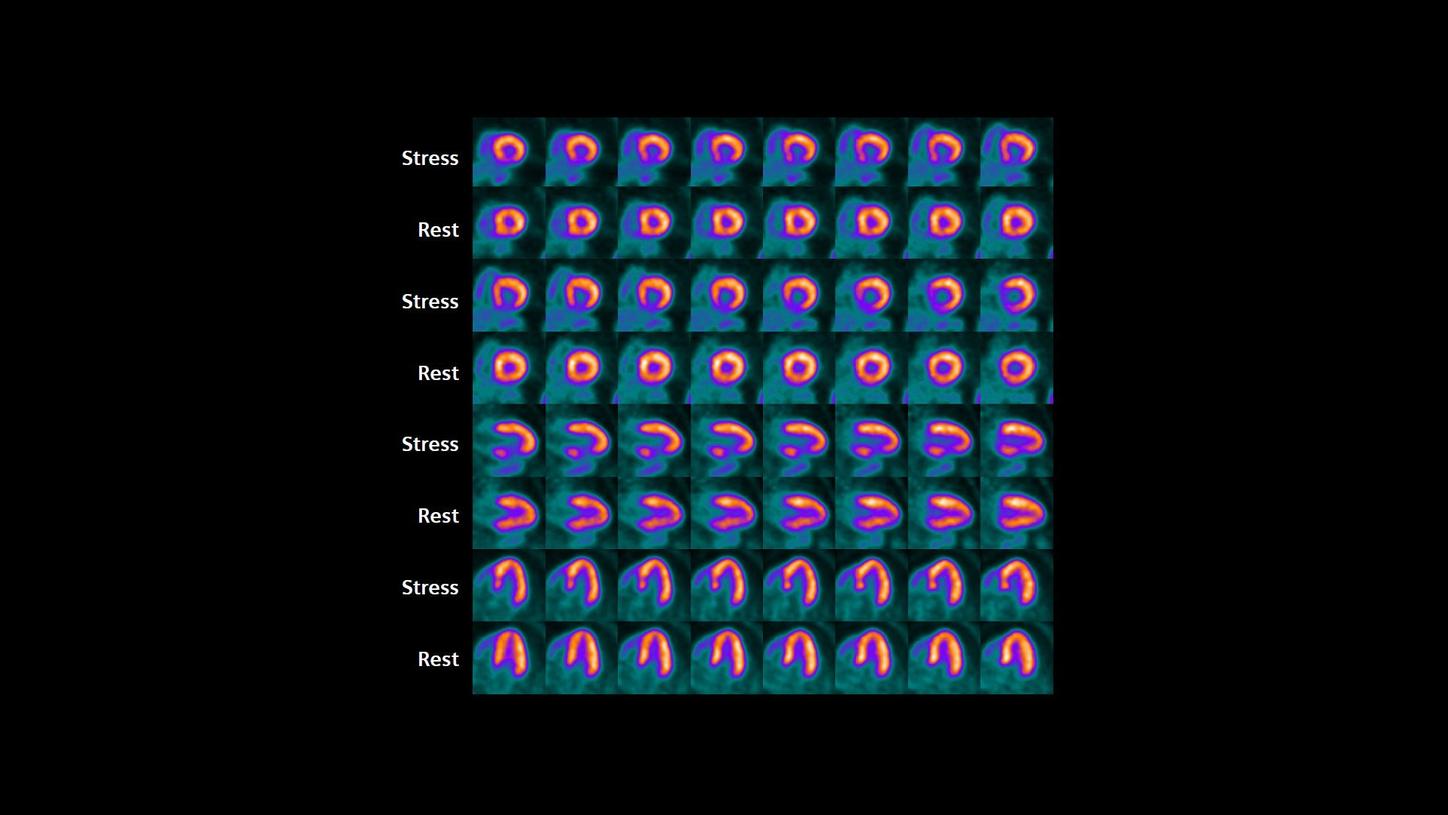 Figure 8: The end diastolic slices from gated stress (left) and gated rest (right) acquisitions show absence of significant regional wall motion abnormality both during stress and rest. The calculated ejection fraction is within normal limits both in stress and rest. 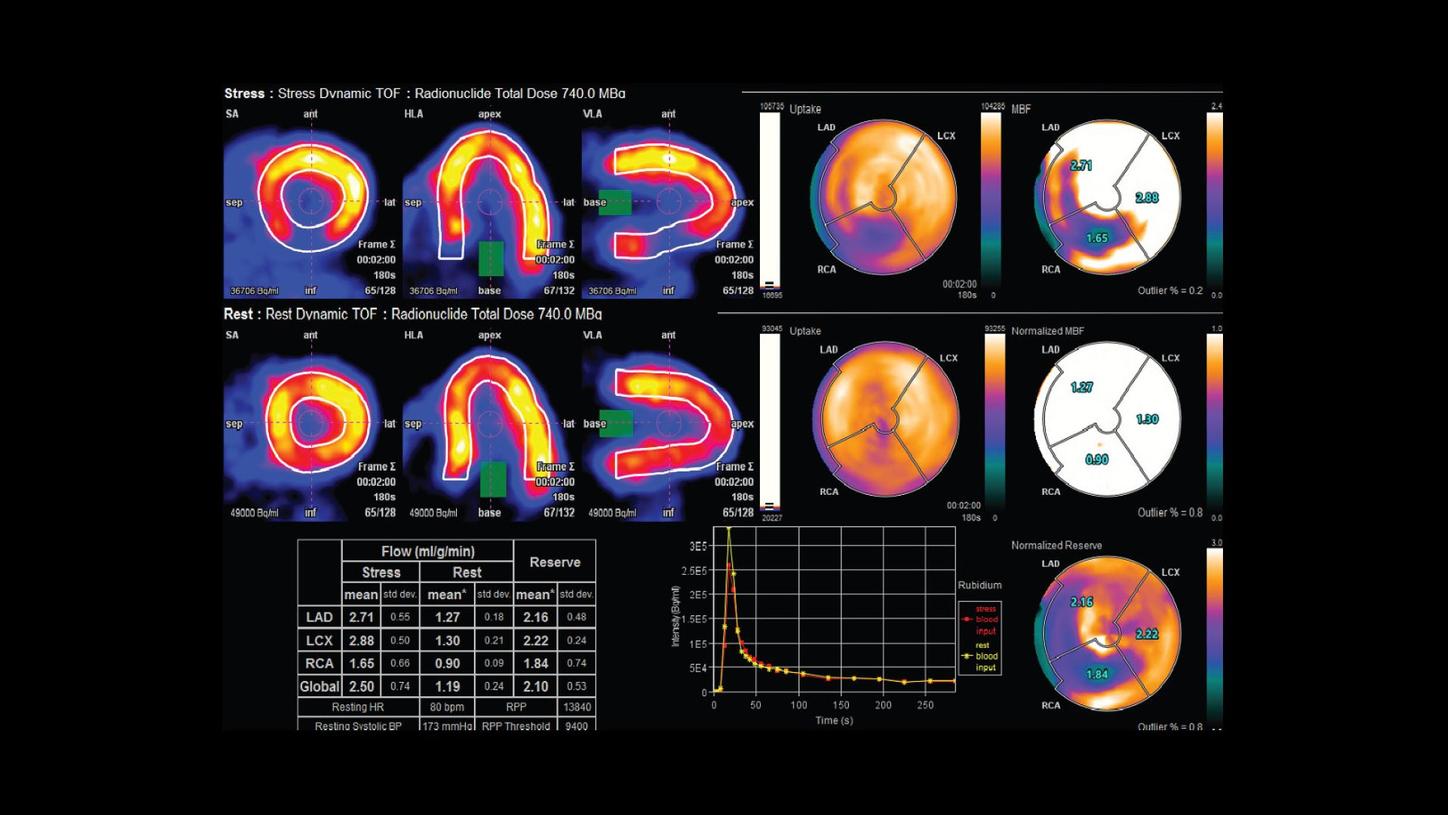 Figure 9: Stress-rest MBF estimation performed on syngo.via shows decreased stress perfusion in the inferior wall and inferoseptal region. MBFR is also reduced in the same area. Remaining LV myocardium including the LAD and LCX territories show normal values at stress and rest with normal MBFR. Resting perfusion in the inferior wall shows normal absolute values (0.90 ml/g/min), which are significantly lower than the resting flow values in the LAD and LCX territories (1.3 ml/gm/min). 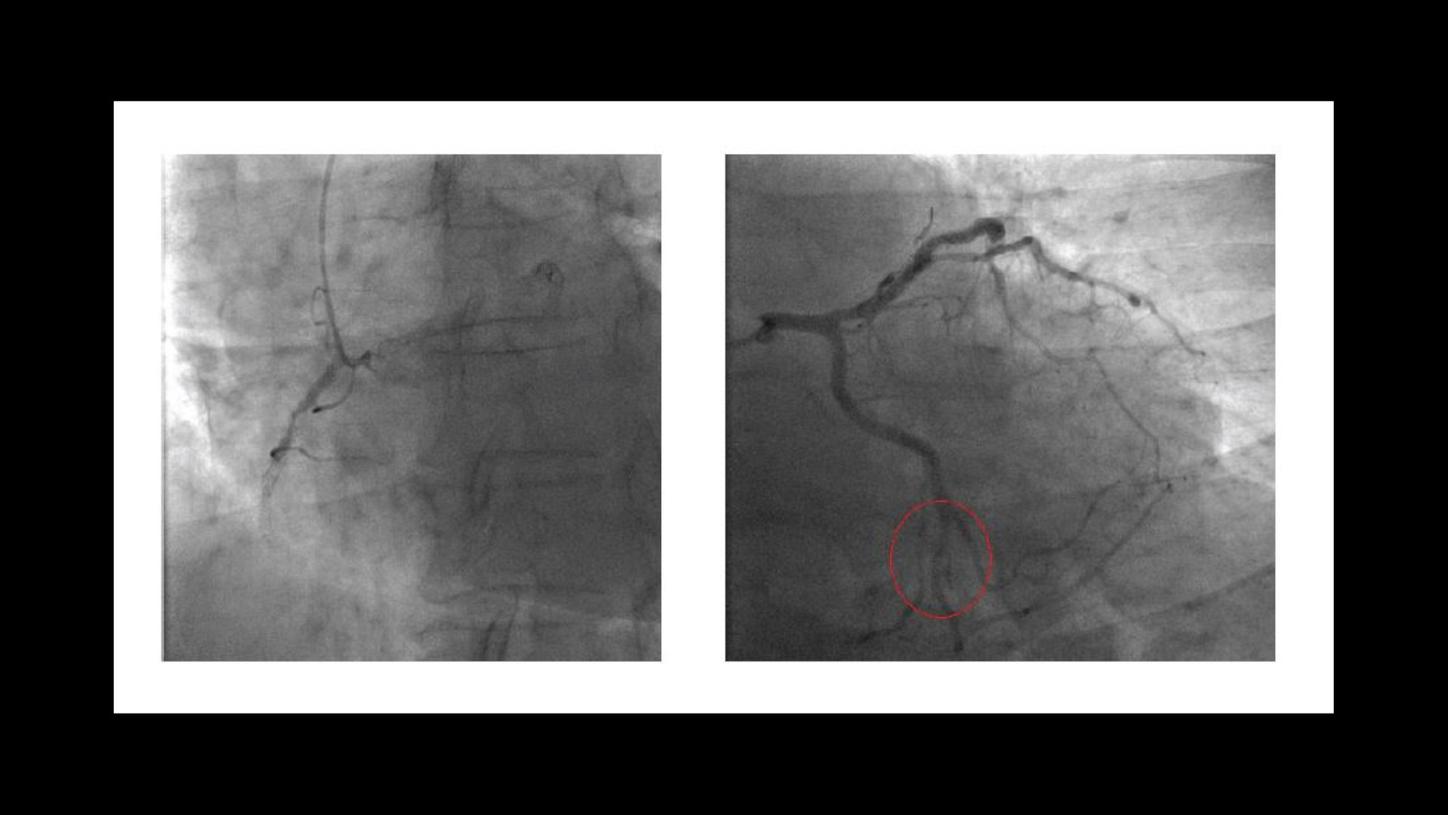 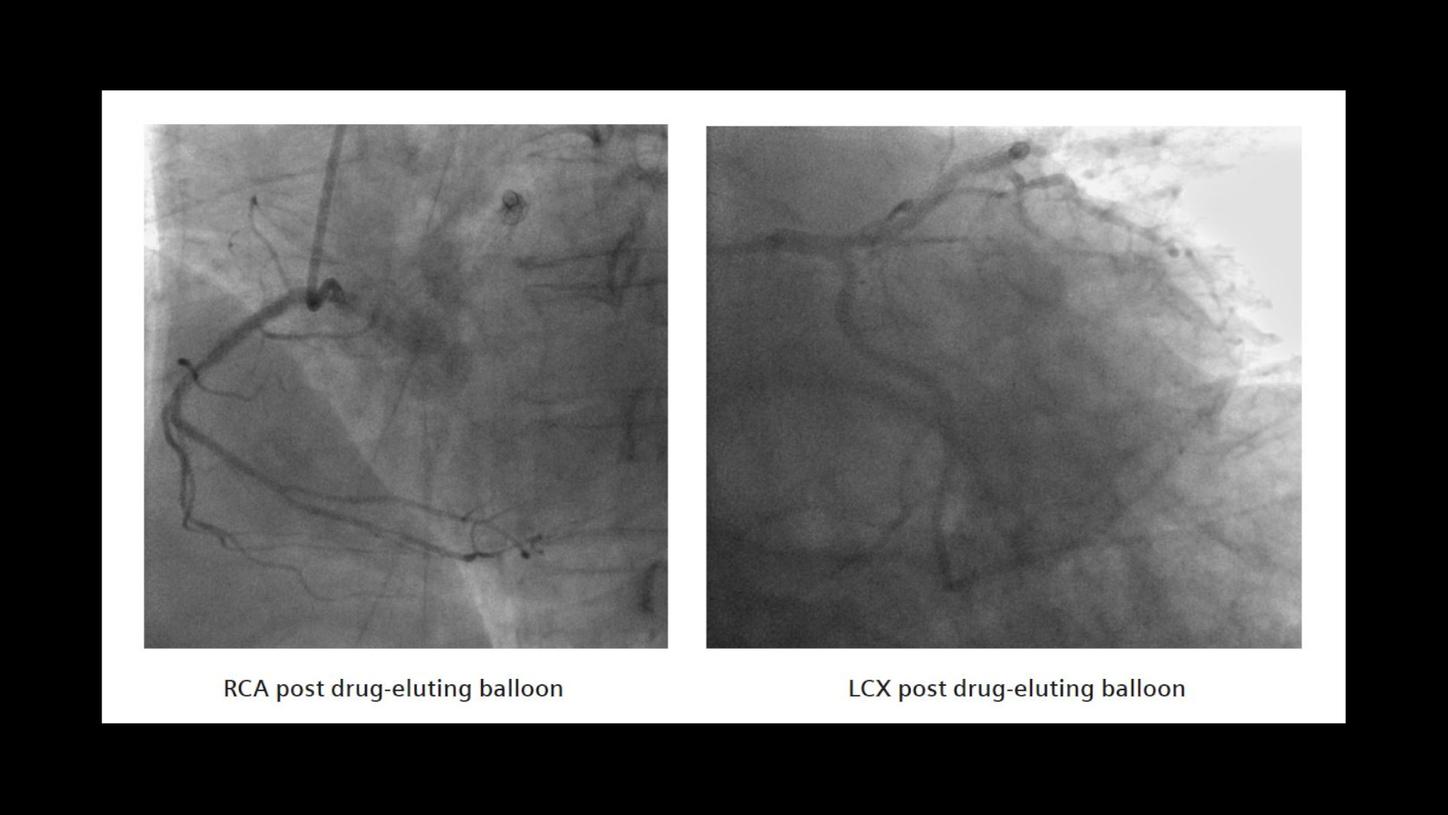 Figure 11: The coronary angiography following the drug-eluting balloon angioplasty of the RCA and distal LCX shows normal distal flow in the RCA, PDA as well as in the distal LCX and OM1 and OM2, reflecting successful restoration of luminal flow in both coronary arteries.

As seen in Figure 1, the perfusion study reflects severe multivessel CAD with significant stress-induced left ventricular (LV) cavity dilation. There is severe reduction in tracer uptake  at the apex and all peri-apical segments along with a mild reduction to the mid/basal inferior myocardium at peak stress. The tracer uptake at rest is within normal limits reflecting a large area of stress-inducible ischemia in the left anterior descending (LAD) territory as well as moderate ischemia in the right coronary artery (RCA) territory.

As evident in Figure 6, coronary angiography demonstrated luminal irregularities in the mid-LCX artery which was identified as residual disease but not deemed severe enough for intervention with adequate contrast flow to the distal-LCX, obtuse margin 1 (OM1), and obtuse margin 2 (OM2).

Immediately following the PCI, the patient was re-admitted with hypoxemic (Type 1) respiratory failure. Lung perfusion SPECT/CT was negative for pulmonary embolism, and the serum troponin was also negative. The patient recovered following ventilatory support. However, there was another subsequent admission 6 months post-PCI with chest pain and respiratory distress. In the second instance, the serum troponin was also negative.

There is mild stress-induced LV cavity dilatation which reflects severe ischemia. However, the resting LV cavity size is normal.

As evident in the post-PCI PET/CT myocardial perfusion study (Figures 7-9), there is functionally significant ischemia in the inferior wall and inferoseptal segment while the LAD and LCX territory shows normal stress perfusion. When compared to the previous study, there is complete resolution of LAD ischemia. However, the presence of a large perfusion defect in the inferior and inferoseptal segments suggests a new significant ischemia in the posterior descending artery (PDA) distribution (6/20 segments). LV systolic function is normal reflecting the moderate degree of ischemia at peak stress.

The patient then underwent a follow-up coronary angiography.

Coronary angiography revealed complete occlusion of the RCA stent along with significant flow impairment related to the luminal irregularity in the distal-LCX, which together contribute to the reversible ischemia in the inferior wall and inferoseptal region. The lateral and postero-basal walls are normally perfused since the proximal and mid-LCX show normal luminal flow. The distal LCX irregular luminal lesion with reduced FFR of 0.6 contributes to the inferior wall ischemia while the completely occluded RCA contributes to the inferoseptal as well as the inferior wall ischemia.

In view of the coronary angiography results, the patient underwent drug-eluting balloon angioplasty of both the RCA and distal LCX. Normal distal flow was restored in both vascular territories following the angioplasty.

This clinical case example illustrates the value of 82Rb PET/CT myocardial perfusion imaging with MBF estimation in detecting multivessel CAD and guiding therapeutic intervention as well as detecting restenosis on follow-up. The severity of the stress-induced perfusion defect in the initial study along with the reduction in absolute value of stress MBF in the affected LAD and RCA territories compared to the normal LCX territory reflects the image quality and quantification advantage of myocardial perfusion PET/CT, especially with current-generation silicon photomultiplier (SiPM) systems like Biograph Vision with excellent time-of-flight (ToF) performance, high count-rate capability, and low detector saturation.

The average LAD territory MBF was 1.84 ml/gm/min at peak stress while that of the normally perfused LCX territory was 2.95 ml/gm/min, although the resting blood flow in both territories was similar. This difference in stress MBF of nearly 40% between ischemic and normally perfused myocardium reflects the quantitative accuracy of PET blood flow estimation. Stress-induced LV dilatation and wall-motion abnormalities evident on static and gated stress PET images reflect multivessel disease while normal resting myocardial perfusion and left ventricular ejection fraction (LVEF) confirm the complete reversibility of the ischemic segments. The stress MBF in the inferior wall (RCA territory) shows further reduction compared to the LAD territory with a stress MBF value of 1.17 ml/gm/min, which reflects the severity of the hemodynamic impairment due to the RCA stenosis as compared to that of the LAD. Even resting perfusion in the RCA territory is significantly lower compared to that of the LAD, although it is within the normal range. Although MBF is impacted by multiple factors over and above stenosis severity, including the state of collateral circulation and microvascular disease, studies have shown a correlation between absolute MBF and coronary flow reserve (CFR) with stenosis severity.

In a study performing 82Rb dynamic PET for MBF estimation compared with stenosis estimation by quantitative coronary angiography, 15 patients with angiographically documented CAD and 7 age-matched asymptomatic controls without CAD risk factors were studied. Rest and stress MBF in regions subtended by vessels with < 50% stenosis was similar to that of the individuals without risk factors for CAD. MBFR was similar in the two groups (average 1.9 compared to 2.2). MBFR values were able to differentiate coronary lesions with 70% to 89% stenosis from those with 50% to 69% stenosis (average MBFR of 1 compared to 1.7 for the group with lower stenosis levels). MBF at peak stress and MBFR were inversely correlated to the percent diameter stenosis on angiography. The absolute MBF and MBFR values in the ischemic segments in the present study are comparable to that of published studies.1

In-stent restenosis is an established complication following coronary stenting, although the incidence is less than 10% for drug-eluting stents.2 As in this case example, restenosis can precipitate acute ischemic episodes, including hypoxemic respiratory failure. The follow-up 82Rb PET/CT myocardial perfusion study clearly demonstrates the reversible perfusion defect in inferior and inferoseptal wall, which reflected involvement of the RCA territory, more specifically the PDA distribution. The RCA territory average MBF was 1.65 ml/gm/min at peak stress, which was significantly higher than the value in the initial study. The resting RCA MBF was also higher at 0.90 ml/gm/min. The coronary angiography confirmed in-stent restenosis of the RCA along with identification of the distal LCX luminal irregularities as hemo-dynamically significant due to the reduced FFR of 0.6. Both of the lesions contributing to the inferior wall and inferoseptal ischemia were treated with drug-eluting balloon angioplasty, which has been shown to have a lower incidence of restenosis. The normal stress and resting LVEF, absence of stress-induced wall-motion abnormalities, and normal resting perfusion reflect the moderate nature of the ischemia and the complete reversibility of the ischemic myocardium.

A 82Rb stress-rest PET/CT myocardial perfusion study with absolute quantification of MBF is an accurate technique for detection and characterization of myocardial ischemia in order to guide therapy as well as a follow-up procedure to detect post-PCI complications such as in-stent restenosis, stenosis progression, or development of fresh coronary stenosis. Absolute values of stress MBF, MBFR, and post-stress LV cavity dimensions also contribute to the assessment of disease severity and reversibility of ischemic segments.

The outcomes achieved by the Siemens Healthineers customer described herein were achieved in the customer’s unique setting. Since there is no “typical” hospital and many variables exist (eg, hospital size, case mix, level of IT adoption) there can be no guarantee that others will achieve the same results.