A 70-year-old man with squamous cell carcinoma of the lung underwent PET/CT imaging for initial staging, performed with Fludeoxyglucose F 18 injection (18F FDG). From the time of initial injection, whole-body dynamic PET imaging was performed on Biograph Vision™ in order to obtain additional parametric indices of uptake so as to better characterize lung lesions.

Dynamic whole-body PET imaging was performed with Siemens Healthineers’ FlowMotion™ Multiparametric PET Suite using standardized imaging protocol. With the patient on the system table, 6.1 mCi (226.4 MBq) of 18F FDG was intravenously administered and was immediately followed by a six-minute, single-bed, list-mode (LM) acquisition centered over the heart, in which an image-derived arterial input function—used as a non-invasive alternative to arterial blood sampling—was generated. Whole-body scanning then commenced with continuous bed motion using FlowMotion, which allows data acquisition during both the forward and reverse passes of the gantry bed. A total of 19 whole-body passes were acquired, totaling a scan time of 89 minutes: four passes at two minutes per pass, followed by 15 passes at five minutes per pass. Images from whole-body passes 14-19 corresponded to 60-90 minutes post-injection and were summed for the standard uptake value (SUV) image. Arterial input functions—derived from the initial single-bed list-mode acquisition over the heart, along with sequential whole-body dynamic acquisitions—were used to generate Patlak-plot–based parametric images reflecting the metabolic rate (MRFDG) of 18F FDG as well as the distribution volume (DV). MRFDG is the Ki multiplied by the blood glucose value, whereas DV reflects the free 18F FDG available prior to the beginning of phosphorylation of FDG, which is an estimate for the vascularity and interstitial fluid components of the tissue being evaluated.

The maximum intensity projection (MIP) and multiplanar reconstruction (MPR) images obtained from the summed whole-body PET acquisitions, along with the CT and fused images, suggest a hypermetabolic malignant lung mass near the right hilum with a large subcarinal metastasis, along with two more smaller hilar metastases on both sides. The additional lung lesion—with a lower level of hypermetabolism in the right lung base—is difficult to characterize as malignant due to the lower level of 18F FDG uptake and associated pneumonitis demonstrated on CT, which suggest the possibility of a co-existing inflammatory lesion.

The SUV, as well as the MRFDG and DV values of the primary lung lesion and mediastinal metastases, demonstrate the variation in behavior of malignant lesions with similar origins: the metastases show a higher level of glucose metabolism than the primary but with a lower level of vascularity or interstitial fluid component.

This reflects the heterogeneity of malignant lung lesions as well as variability in the proliferative and angiogenetic potential between primary and metastatic lung lesions. Preclinical studies have shown lower levels of angiogenesis and reduced vascular density in lymph node metastases compared with corresponding primary tumors.1 Reduced vascularity may explain the variation in distribution volumes between the primary lung tumor and metastases.

The right lung base lesion (2.06 cm in longest diameter) is of similar size to the mediastinal metastases (2.36 cm longest diameter) but with significantly lower SUVmax and MRFDG and slightly higher DV, which suggests an inflammatory lesion with a lower level of glucose utilization and slightly higher vascularity and interstitial fluid related to inflammation-related tissue fluid retention. 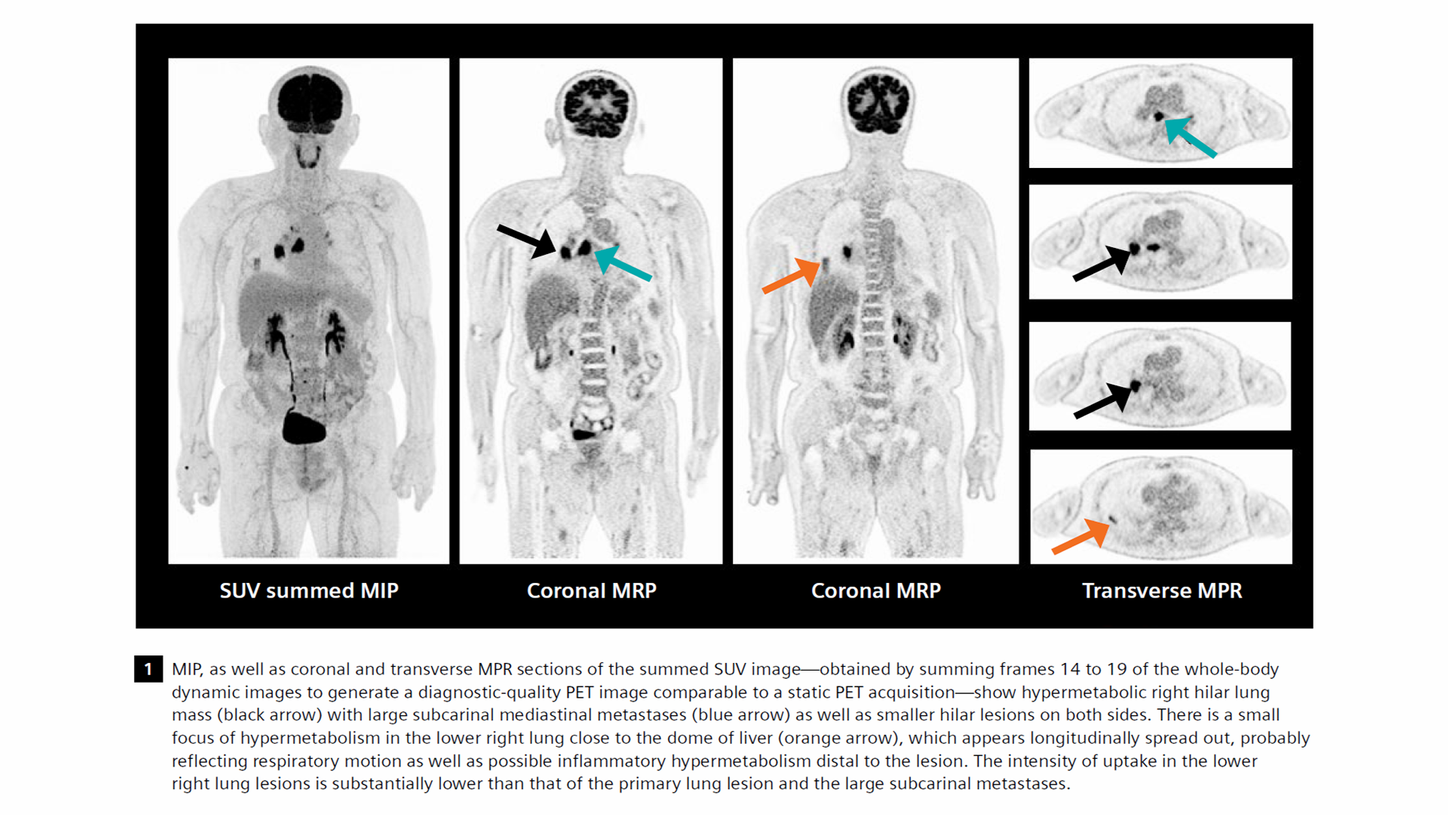 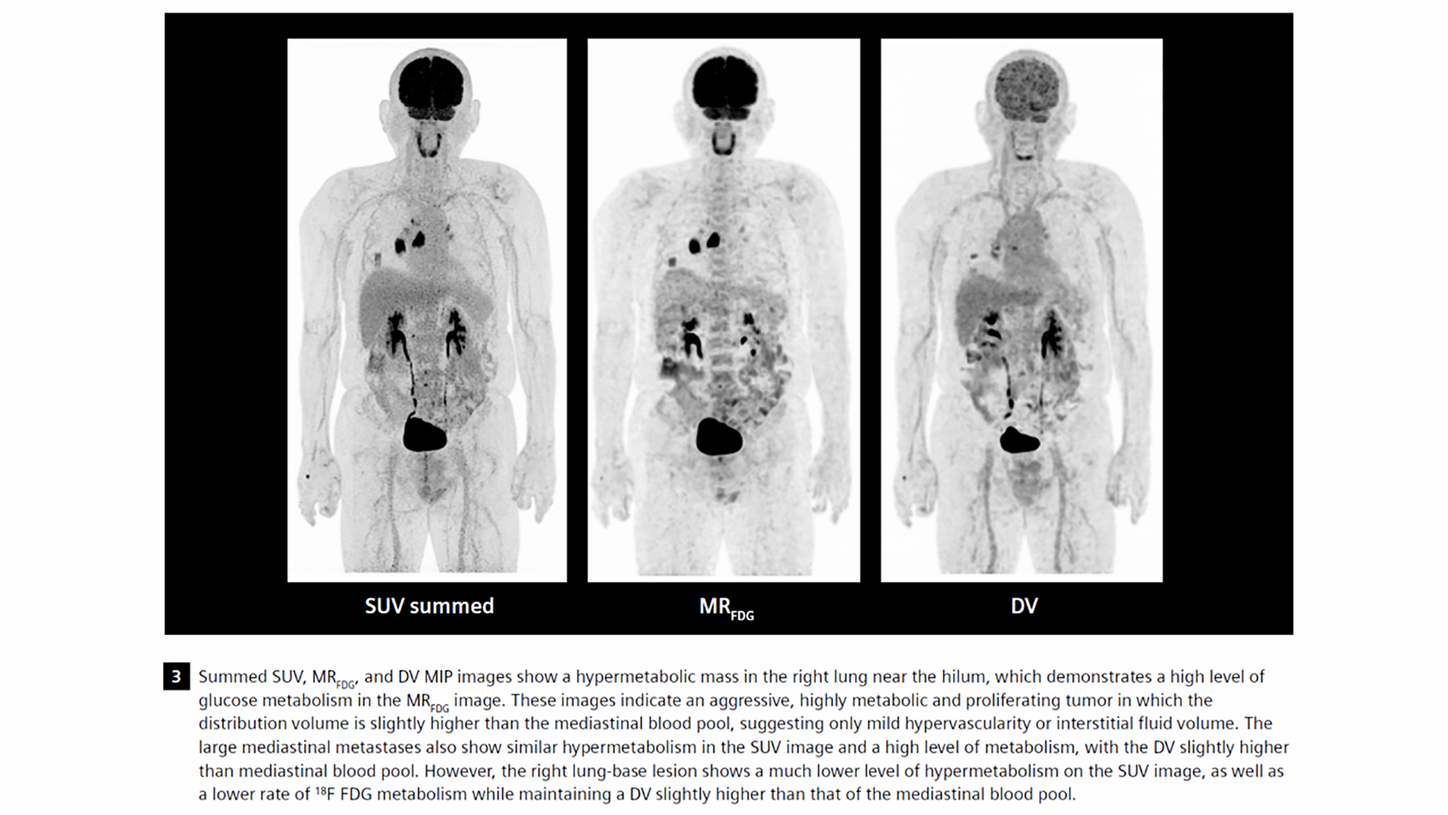 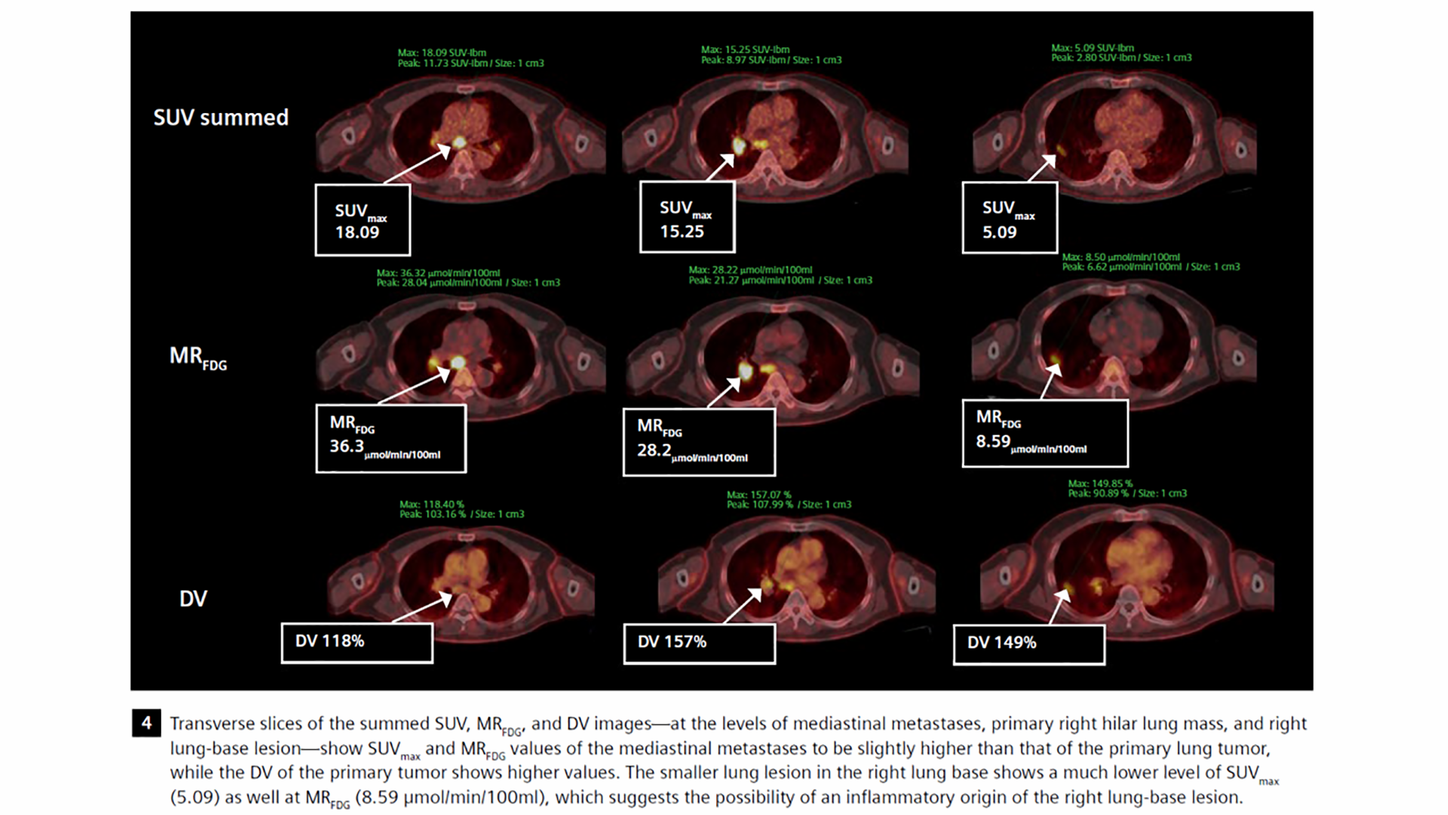 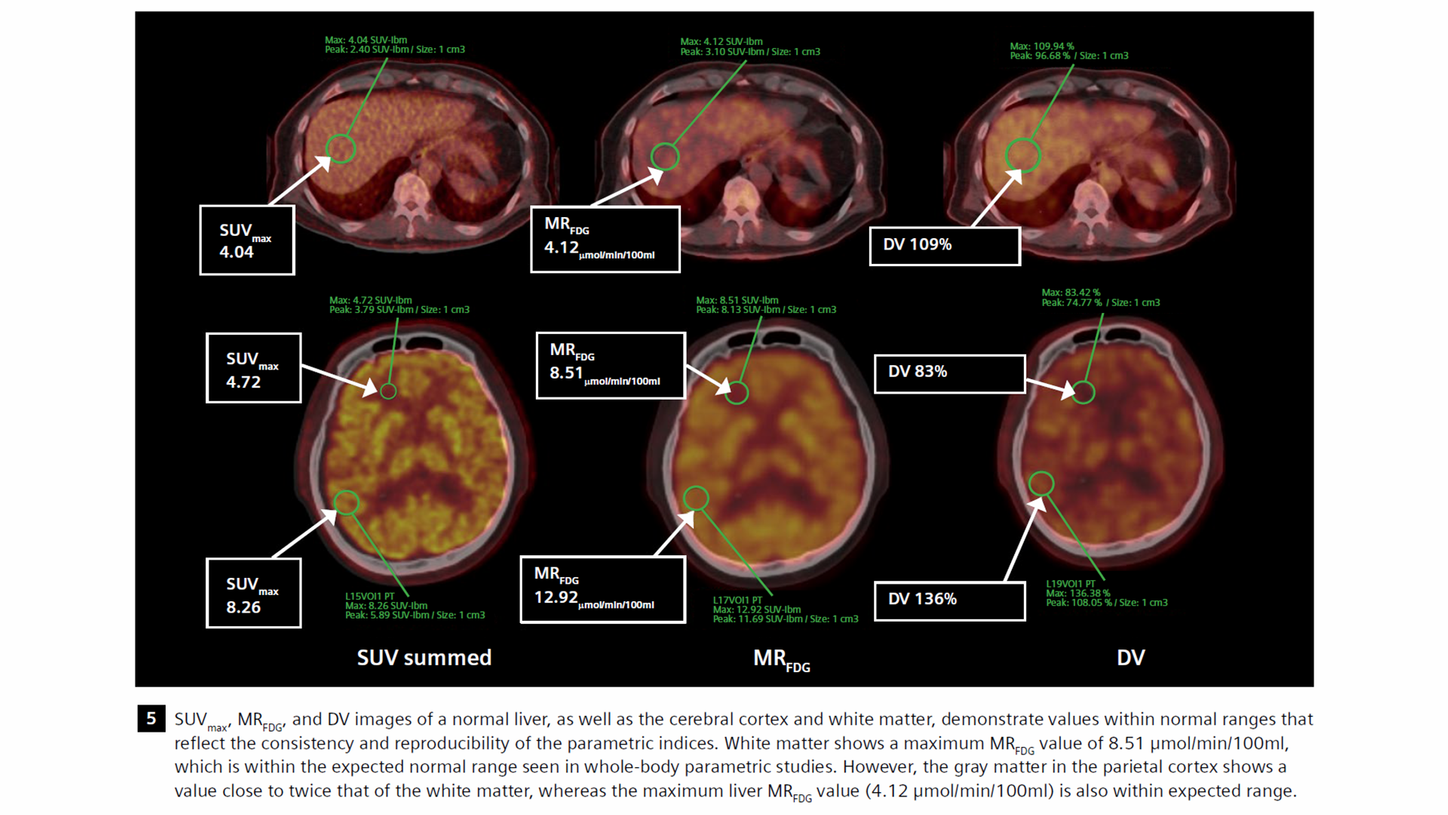 This clinical example demonstrates the value of whole-body dynamic PET imaging for calculation of metabolic parameters such as the metabolic rate of 18F FDG (MRFDG), which reflects true levels of glucose utilization and acts as a surrogate for tumor cellularity and proliferative levels. Higher MRFDG in the mediastinal metastases, as compared to the primary tumor, reflects aggressive behavior of the metastases and indicates an adverse prognosis. On the other hand, the DV is higher in the primary tumor as compared to the mediastinal metastases, which reflects higher vascularity and interstitial fluid component along with small focal necrotic components commonly associated with a large, actively proliferating tumor. Tumor aggressiveness can be correlated with histopathology and tumor genomics, with specific mutations associated with higher metastatic potential. In the absence of correlating histopathological or genomic information, high metastatic glucose metabolism—reflected by high MRFDG in the subcarinal metastases with values higher than the primary tumor—can be assumed to reflect adverse prognosis, requiring possibly more aggressive radiation therapy along with neoadjuvant chemotherapy. The slightly lower MRFDG in the primary tumor may reflect a higher level of intratumoral necrosis, leading to lower cellularity along with higher vascularity and interstitial fluid content as reflected by a higher DV. The lung lesion in the right lung base, while being of a similar size to the mediastinal metastases, shows a significantly lower MRFDG value with higher levels of interstitial fluid content and vascularity, which is reflected by a higher DV compared to the mediastinal metastases. This suggests the lung-base lesion may have a possible relation to inflammation, which is supported by CT changes adjacent to the lesional margins. A confirmed presence of inflammation, either by invasive biopsy or follow-up radiography or CT, is key to determining whether the lung-base lesion requires focal radiation. Low MRFDG values indicate the possibility of inflammation, although the SUVmax of the lung-base lesion (5.09) is compatible with presence of malignancy.

Although SUV is the primary quantitative value routinely used in 18F FDG PET/CT imaging, it is affected by various factors including patients’ blood glucose level, post-injection delay, and image reconstruction parameters. Moreover, SUV is an index of tracer concentration within a volume of interest, which is comprised of both phosphorylated and free 18F FDG while MRFDG reflects the rate of phosphorylation of glucose—which demonstrates the true metabolic rate of the tissue considered. Thus, MRFDG is a true measure of tissue metabolism and is observed in the present case example, as MRFDG of the primary and metastatic tumor is significantly higher compared to the lung-base lesion.

Whole-body dynamic PET imaging utilizing continuous bed motion (FlowMotion) on Biograph Vision, in combination with the Multiparametric PET Suite, provides the opportunity to incorporate high-quality PET imaging within a dynamic PET workflow. Such an acquisition type leads to the generation of whole-body parametric images of MRFDG and DV along with high resolution and high signal-to-noise summed -SUV images for routine clinical interpretation. Patlak graphical analysis of a two-compartmental model for evaluation of radiotracer kinetics, applied to the initial six-minute dedicated cardiac acquisition for generation of the arterial input function—along with the subsequent whole-body dynamic data—allows the derivation of truly quantitative MRFDG and DV values. In order to facilitate routine use of such dynamic acquisition protocols and derivation of parametric indices, the software automatically defines regions of interest in the aorta and left ventricle to generate arterial input function curves and eliminate the need for invasive arterial blood sampling. The resultant parametric images provide absolute values for MRFDG and DV as well as SUV indices, thereby providing comprehensive information for lesion characterization.

Would you like to provide detailed feedback?
125 / 125
1
Jeong H-S, Jones D, Liao S, et al. Investigation of the Lack of Angiogenesis in the Formation of Lymph
Node Metastases. J Natl Cancer Inst. 2015. doi:10.1093/jnci/djv155.
The outcomes achieved by the Siemens customers described herein were achieved in the customer’s unique setting. Since there is no “typical” hospital and many variables exist (e.g. hospital size, case mix, level of IT adoption) there can be no guarantee that others will achieve the same results.