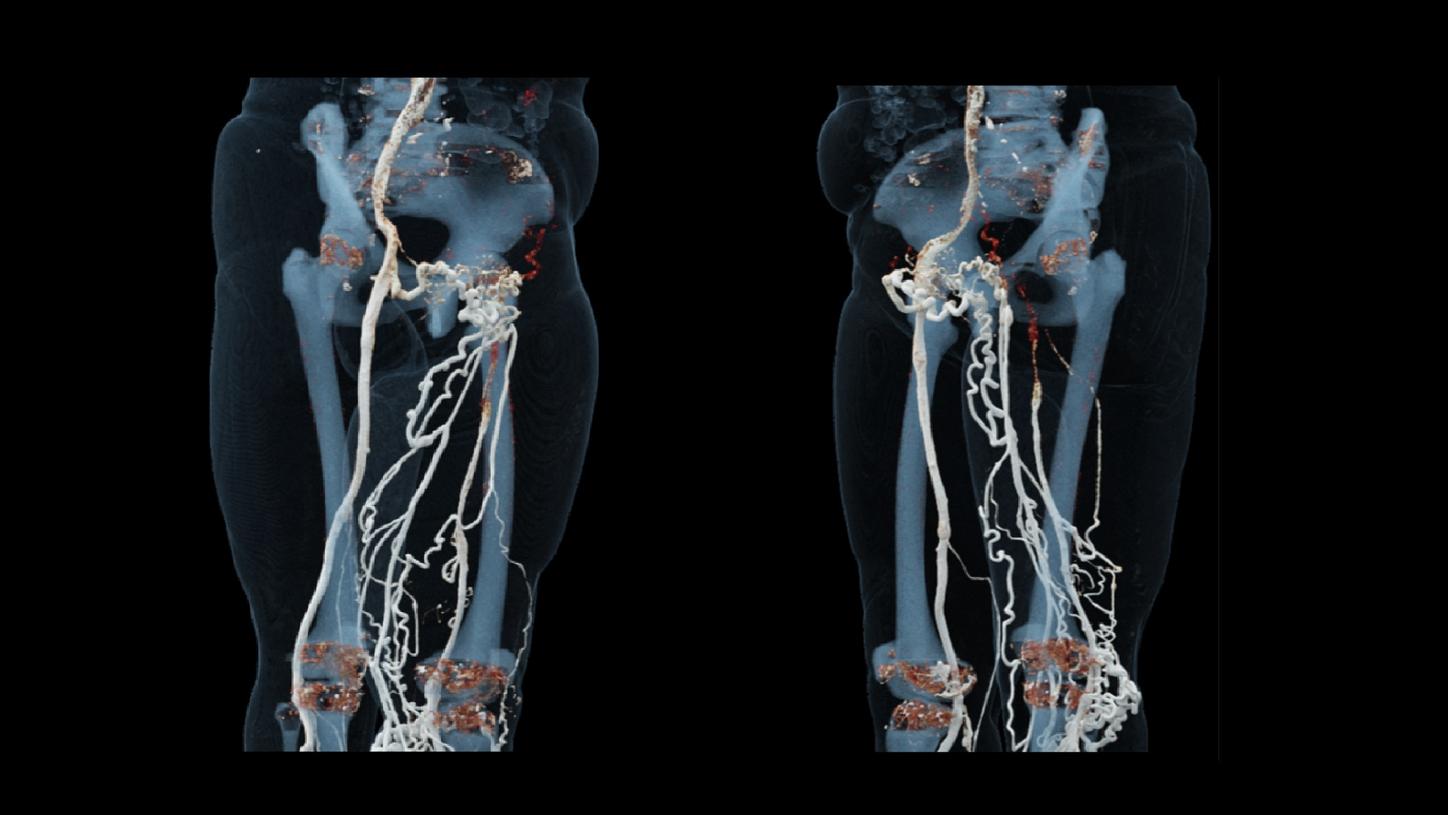 A 70-year-old female patient, suffering from a deep vein thrombosis (DVT) of the left lower limb for the past seven years, came to the hospital complaining of newly noticed varicose veins in her lower abdominal wall and perineum within the past three months. These appeared while standing and disappeared when lying down. Her symptoms, including left lower limb edema, heaviness and discomfort, could be relieved by rest and/or taking anticoagulants. There were neither ulcerations, numbness, pain in the left lower limb, nor palpitation, chest tightness or shortness of breath reported. A Doppler ultrasound (US) examination suggested a DVT in the left common femoral vein (CFV). A direct CT venography (CTV) of the bilateral lower limbs, using a dual energy (DE) scan, was performed for further assessment prior to treatment.

CTV images showed no contrast opacification in the left iliofemoral venous segment. There were associated filling defects in the left common iliac vein (CIV), external iliac vein (EIV), CFV and proximal femoral vein (FV). Severe superficial venous varicosities were seen in the lower abdominal and pelvic wall, as well as in the left lower limb, draining into the right CFV. The inferior vena cava (IVC), as well as the deep veins in the left calf and the right lower limb, were well enhanced without filling defects. A diagnosis of a left iliofemoral DVT was proposed and confirmed by a follow-up deep vein angiography. Subsequently, the patient underwent a successful iliofemoral venous recanalization and stent implantation. An US follow up one month later showed patent stents.

Fig. 1: Anterior (Fig. 1a) and posterior (Fig. 1b) views show severe superficial venous varicosities in the lower abdominal and pelvic wall as well as in the left lower limb. Both cVRT images are reconstructed using DE images displayed at 45 keV with enhanced contrast.

Fig. 3: Post stenting follow up US images demonstrate patency of the stents in the left CIV (Figs. 3a and 3b) and EIV (Figs. 3c and 3d).

DVT is a venous thrombosis, with the formation of one or many thrombi in a deep vein, most commonly in the lower limbs. It often occurs on the left side, as the left CIV is anatomically straddled and compressed, to various degrees, by the left internal iliac artery and the right common iliac artery. This hinders the blood flow resulting in blood stasis, and more likely, thrombotic formation. The most life-threatening complication, caused by a DVT, is a pulmonary embolism (PE). Therefore, imaging diagnosis is imperative prior to preventive measures and treatment plans. Doppler US is well-established in detecting DVT, however, there are difficulties in delineating the collateral pathways, as well as accessing certain areas such as pelvis and vena cava. Direct CTV is commonly attained by injecting contrast agent via the diseased dorsal vein followed by CT scanning of diseased limbs. It can assess the venous anatomy with wide anatomic coverage in a short acquisition time, determine venous patency and delineate collateral circulations. When a CT scan is performed using DE, a special filter technique – Selective Photon Shield (SPS II) – is applied to enable significant separation of the energy spectrums at 80 and 150 kV settings. The data acquired at these two kV settings are calculated to display images at different keV levels using “syngo.CT DE Monoenergetic Plus”. The image contrast at lower keV, such as the 45 keV used in this case, is significantly enhanced compared to that at higher keV or in the mixed images. This improves the contrast-to-noise ratio and is especially helpful in obese cases (BMI 36 kg/m2 in this case), when using diluted contrast or even in salvaging the scan when the bolus timing is sub-optimal. For an intuitive understanding of the anatomical structures in three dimensions and an easier communication, cinematic volume rendering technique (cVRT) is used to provide photorealistic images with improved depth and perceptions. In our hospital, the combination of direct CTV using DE and cVRT has a promising clinical value in establishing the diagnosis of a DVT.