Elastography is often used as a general term to describe any technology that uses force displacement to visualize or measure tissue strain, elasticity, or stiffness. As with any emerging technology, first-generation ultrasound elastography tools have provided the foundation for a more sophisticated class of innovations. Advanced ARFI and shear-wave ultrasound elastography technologies may offer advantages that were not possible with noninvasive tissue stiffness analysis until now. 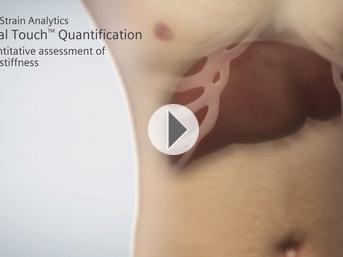 Clinical Use of ARFI Elastography

ARFI elastography imaging
Acoustic radiation force impulse elastography or ARFI elastography sends a “push pulse” through tissue to displace the tissue. The tissue displacement is monitored to show relative stiffness. The ARFI push pulse is not dependent on the user and provides reproducible data as well as a reliable image of relative tissue stiffness.

Shear wave-based elastography
When an ARFI push pulse is sent through tissue, the pulse generates lateral shear waves in the tissue. The speed of the shear waves varies depending on tissue stiffness and can be measured as part of a complementary elastography technique. Together, ARFI and shear wave detection offer precise and reproducible quantification as well as visualization of tissue stiffness.