The team of nuclear medicine and molecular imaging clinicians at Centre Hospitalier Universitaire Vaudois (CHUV) in Lausanne, Switzerland strives to evaluate how much quantitative SPECT/CT is able to influence diagnoses—and subsequent treatment management—when utilized as part of daily clinical routine. The team employs xSPECT Quant™ technology to evaluate the utility of quantitative Technetium-99m (99mTc), Indium-111 (111In), Iodine-123 (123I), and Lutetium-177 (177Lu) SPECT/CT studies. To progress the implementation of quantitative SPECT/CT, the team regularly shares their findings with clinical peers at congresses such as the European Association of Nuclear Medicine (EANM) and the Society of Nuclear Medicine and Molecular Imaging (SNMMI).

“With xSPECT Quant we perform quantitative analysis using four tracers,” explains Mario Jreige, MD, radiologist and nuclear medicine resident at CHUV. “We are currently quantifying not just Technetium in bone scans, but also Indium, DaTscan™, and Lutetium. Our research projects test the clinical application of quantification and we find the results very satisfying.” 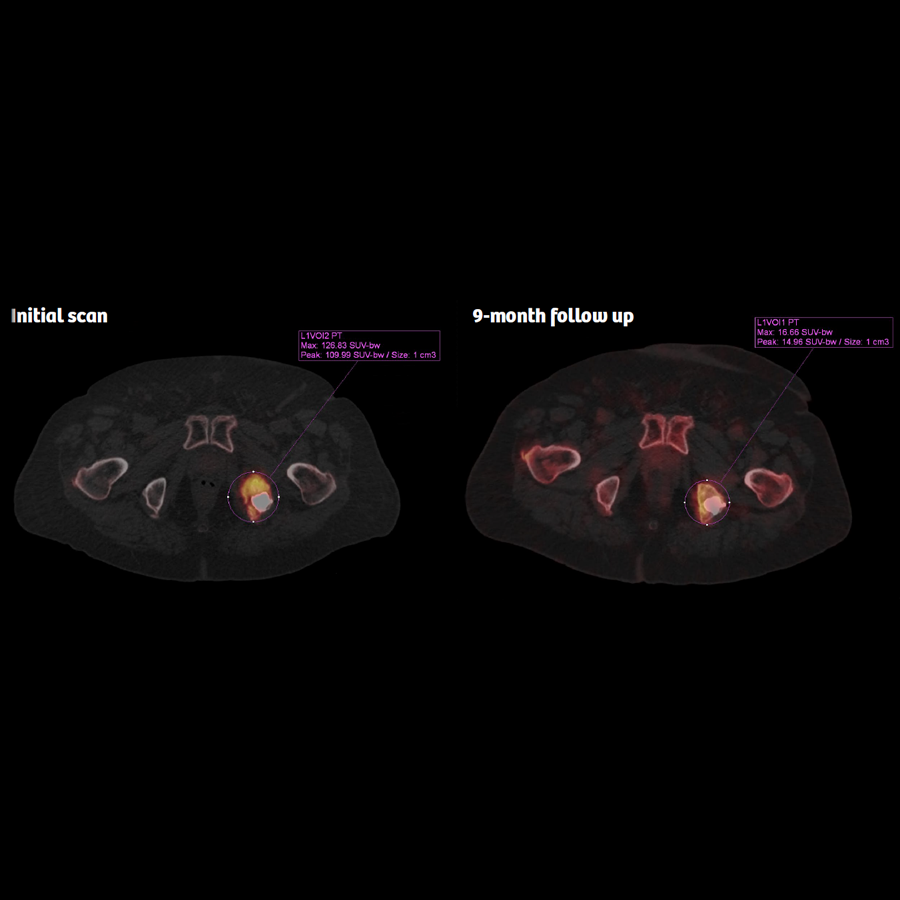 A follow-up xSPECT/CT of a prostatic adenocarcinoma with bone metastasis shows a decrease in tracer uptake at the level of the left ischium, corresponding to a positive response to therapy with radiofrequency ablation and cementoplasty (SUVmax 15.4 g/mL versus 84.2g/mL). No new lesions were detected. 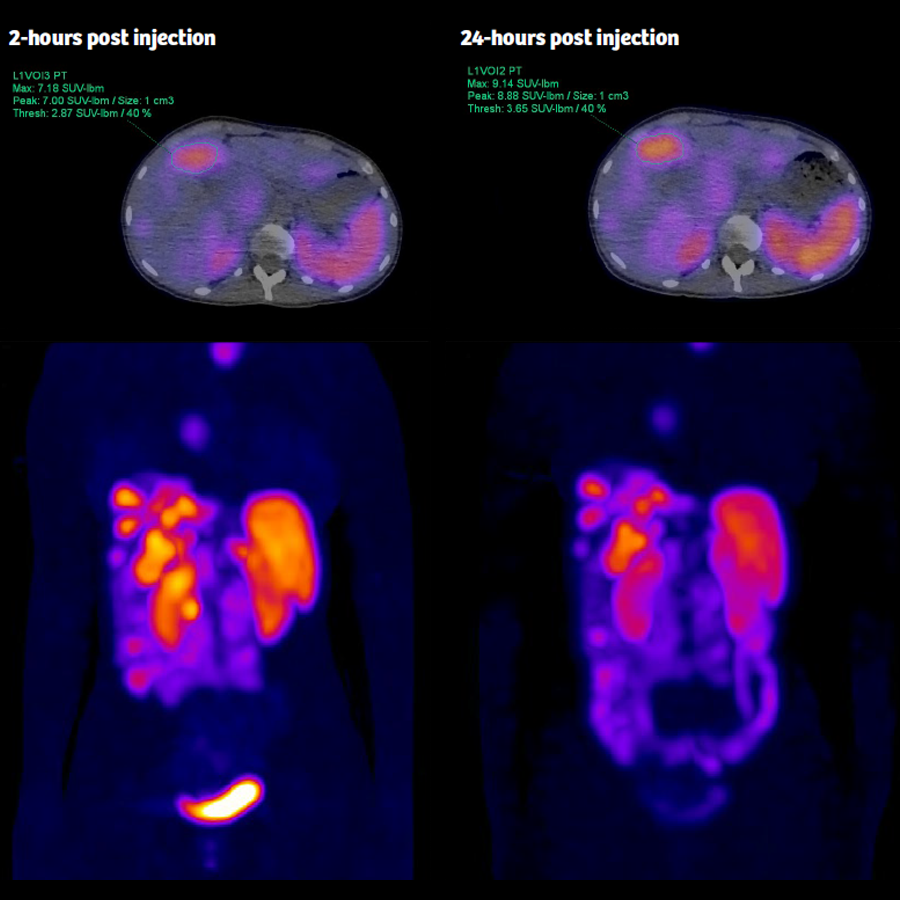 A follow-up xSPECT/CT of a well-differentiated pancreatic neuroendocrine tumor, treated with four cycles of 111In metabolic radiotherapy, showed mild regression of tumoral uptake. SUVmax decreased from 11.8 g/mL to 8.3 g/mL, thus allowing for accurate quantification of the response to therapy. 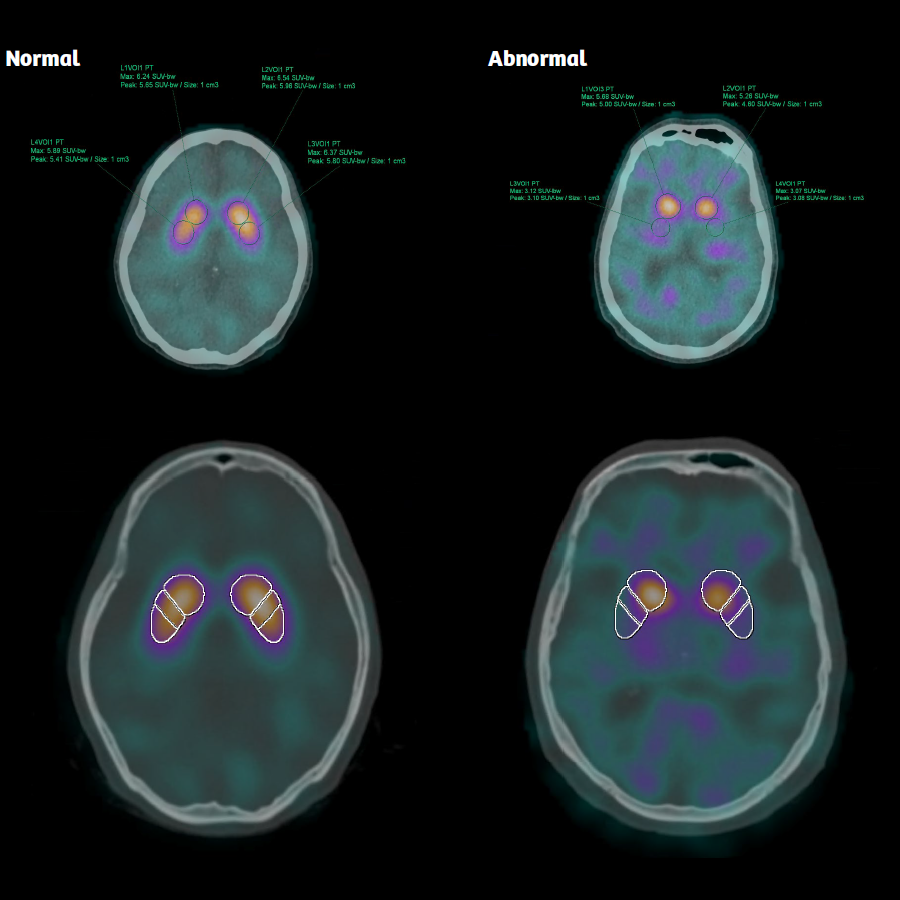 [Normal] A DATscan showed normal and symmetric striatal uptake with absolute SUV quantification reported. The patient was addressed for workup of an intermittent resting and action tremor of both upper limbs, predominantly on the right side.

[Abnormal] An abnormal DATscan showed bilateral striatal dopaminergic denervation, predominantly on the putamens, with absolute SUV quantification reported. The patient was addressed for workup of an atypical extrapyramidal syndrome disorder of balance, and recurring falls. 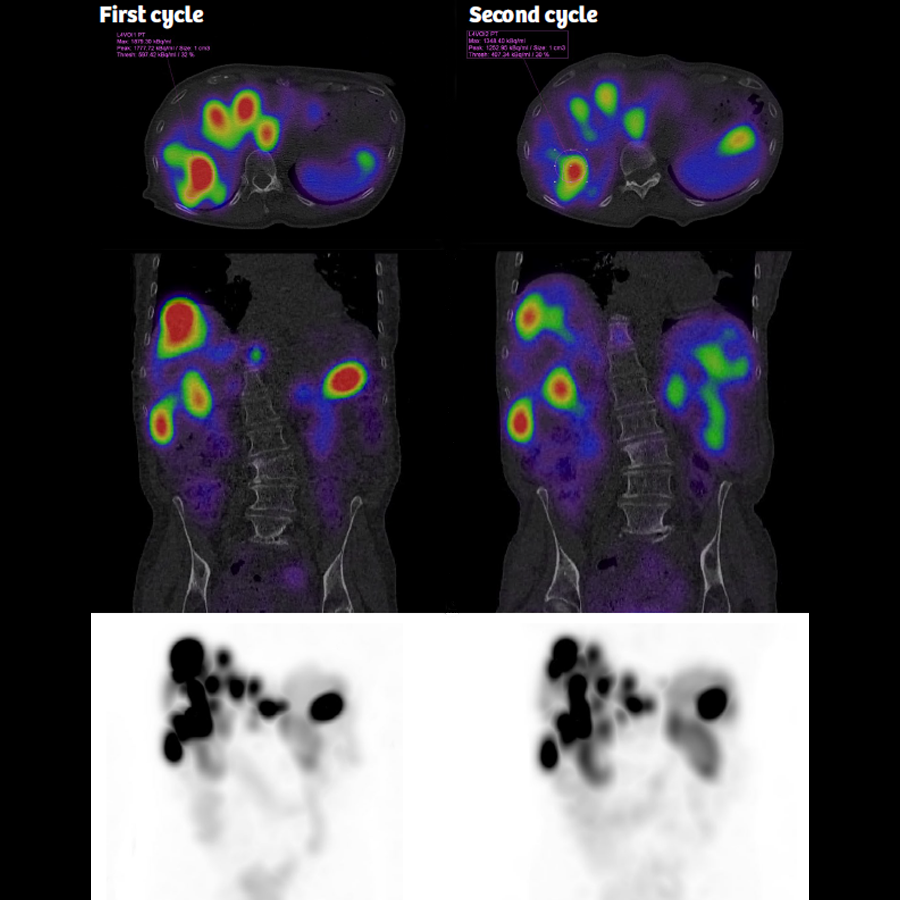 A follow-up xSPECT/CT captured a well-differentiated neuroendocrine tumor with liver metastasis after the first (left) and the second (right) cycles of 177Lu DOTATATE therapy (3.8 MBq). Quantitative evaluation of the liver metastasis uptake showed a 45% reduction in SUVmax after the second cycle, favoring a good response to therapy.

“For 99mTc quantification, we were interested in evaluating if quantification can improve the specificity of bone scans.” says Jreige.

To determine if 99mTc quantification can indeed aid in specificity, the CHUV team performed a retrospective evaluation, which examined a total of 128 metastatic and 17 osteoarthritic lesions.1 Based on the SUVmean and SUVmax quantifications, they established an optimal SUVmax threshold of 20 g/mL to define metastatic bone lesions. The team was also able to determine sensitivity (94%), specificity (94%), as well as positive (99%) and negative (67%) predictive values.

The quantitative analysis showed significant differences in 99mTc uptake on bone scans with notably higher SUVmax and SUVmean in metastatic lesions, and a better accuracy for SUVmax. The team’s findings support the use of quantitative SPECT/CT bone imaging to aid in the diagnosis of malignant lesions. The findings also demonstrate that the integration of SUV information has a clinical impact and can help diagnose indeterminate lesions.

Jreige emphasizes, “we have borderline cases and we need clues to define whether the lesion is metastatic or not. Having this quantitative information is very important for us to establish the diagnosis and become more accurate in our diagnostic capacities.”

As part of the CHUV team’s research, they evaluated the potential clinical impacts of using SPECT/CT quantification with an octreotide scan. In a retrospective study, the team measured mean ± SD and 95% confidence interval (95% CI) SUVmax and SUVmean in nine patients that underwent quantitative 111In-Octreotide scan imaging for neuroendocrine tumor (NET) assessment.2

They found a significant difference in the measured activity of tumoral and non-tumoral tissue. Where the SUVmean and SUVmax of the primary and metastatic sites were reduced by 50% 24-hours after tracer injection, these areas remained higher than the mean splenic uptake. Patients’ digestive activity increased with time but remained lower than normal hepatic uptake.

“From this study, we can conclude that quantification allows us to better distinguish between tumoral and non-tumoral activity,” states Jreige. “And this not only has an impact on the initial diagnosis, but also on therapy planning and monitoring. We are looking forward to continuing our investigation. Quantifying an octreotide scan is important before treatment, especially in the centers where DOTATATE PET/CT is not available, as it could be an alternative.”

As the first team to evaluate the impact of quantitative SPECT/CT using 111In in a clinical setting, the team concluded that octreotide scan with SPECT/CT quantification provides relevant insight regarding normal and pathologic SUV ranges. The results from their study also showed that time variations might offer clarity into the nature of SPECT abnormalities and enhance the specificity of indeterminate neuroendocrine lesions.

To examine whether quantitative SPECT/CT data would add precision in the diagnosis of neurodegenerative diseases of the nigro-striatal pathway, the CHUV team evaluated SPECT/CT quantification using 123I within the basal ganglia.

The team investigated the role of absolute and relative SUV quantification of 123I-Ioflupane (DaTscan™) in comparison to relative semi-quantitative metric methods in the differentiation between a normal and pathologic scan.3 The data from seven patients were analyzed using Siemens Healthineers’ Scenium software, which combines standard anatomy and a comprehensive database of “normal” brain scans and matches those against newly acquired clinical scans. Groups were compared using the striatal binding ratio (SBR) approach, normalized to the occipital region and absolute SUVmean of the striatal, caudate, and putaminal regions. The team was able to compare the SUVmean and relative metric techniques, and uptake symmetry in normal and abnormal subgroups, for each region of interest including left and right caudate nucleus, putamen and striatum, as well as the occipital region.

Only by using the absolute SUVmean, and not standard iterative reconstruction methods, was the team able to differentiate between normal and pathological results in the caudate nucleus. However, all methods detected the difference between normal and pathological findings but with more pronounced significance using absolute SUVmean for the putamen and striatum. xSPECT Quant was also able to detect significant asymmetry in the caudate, putamen, and striatum in a pathological scan.

The CHUV team concluded that quantitative SPECT/CT holds potential as an emerging tool for 123I-Ioflupane analysis because absolute SUV can distinguish smaller differences in uptake over the standard SBR approach, making it possible to detect pathological changes earlier.

“Early identification of this neurological disease is important,” emphasizes Jreige. “It helps the patient receive medications earlier, which can positively impact the treatment outcome.”

177Lu, used as a theranostics agent, is able to successfully target inoperable or metastatic neuroendocrine tumors, yet irradiation of the kidney limits the absorbed dose to the tumor. As patients typically receive a standard dose of 177Lu every two months, repeated four to six times, it is vital to monitor the patient’s internal dosimetry due to this repeated irradiation of the kidneys.4 Using quantitative SPECT/CT, clinicians can follow the 177Lu treatments to support patient dosimetry.

The CHUV team generated a dosimetry evaluation for 177Lu theranostic procedures.5 Quantitative 177Lu acquisitions were performed using xSPECT Quant, whose calibration relies on a National Institute of Standards and Technology (NIST) Selenium-75 (75Se) source. Average activity recovery in organs and lesions, as a function of iteration number, was measured in a SPECT/CT acquisition of a patient three hours after therapeutic administration of 6 GBq of 177Lu DOTATATE.

Reflecting on how their work with SPECT/CT quantification aids the progression of patient care at CHUV, Jreige elaborates, “an interesting thing we learned from the introduction of SPECT/CT quantification is that we should not only use conventional methods, but also move forward and adapt to new technology for the benefit of our patients. In the case of xSPECT Quant, it was very important to understand how to apply this tool to maximize the diagnostic capacities, and therefore to positively impact patient care.”