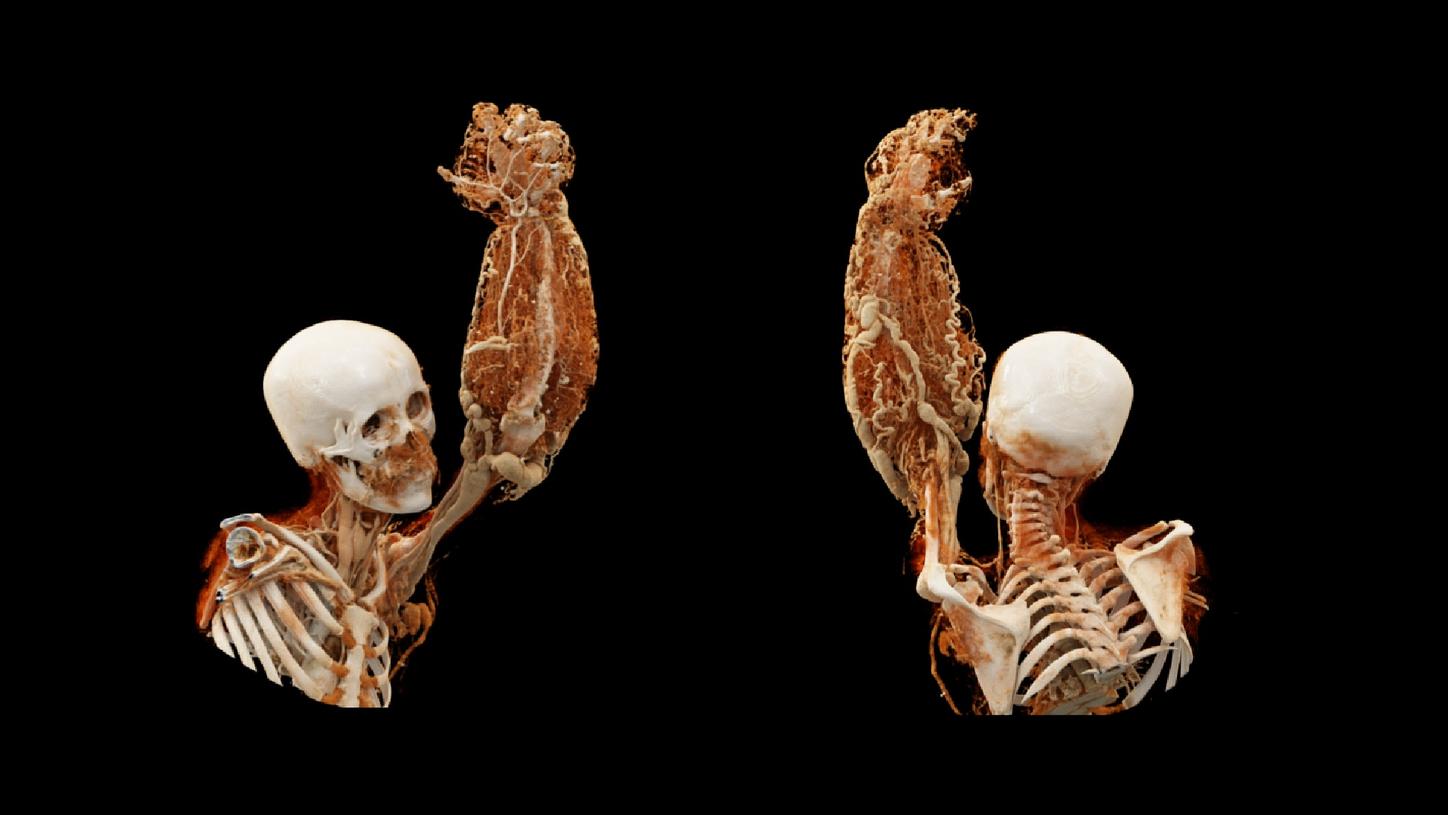 A 26-year-old female patient, suffering from a massive mass on her left hand and forearm, was presented to the hospital. A small mass had appeared on her left wrist at birth and was surgically resected at age of 4 months. The pathology report had suggested a “vascular tumor”. The mass recurred after its removal, growing pari passu with her. Despite various physiotherapies, the mass progressed, extending to the left hand and left forearm, causing significant swelling, pain, dysfunction and deformity. A surgical amputation was planned and a CT angiography (CTA) examination was requested for evaluation prior to surgery.

CT images, from the native scan, showed a significantly swollen and deformed left hand and forearm, with poorly displayed muscular structures. Multiple calcified foci were seen scattered subcutaneously and in the soft tissue, suggesting phleboliths. There was no carpal structure seen, presumably due to osteolytic destruction, which was also present in the metacarpal and phalangeal bones. The radius, ulna and distal humerus showed diffuse hyperplasia and cortical thickening. CTA images revealed excessive anomalous venous channels, ectatic and tortuous, in the left upper limb, axilla, and the anterior chest wall. There were no signs of an arterial anomaly or abnormal arteriovenous connections. A diagnosis of venous malformation was suggested. The patient underwent surgical amputation of the left upper limb. The postoperative pathology revealed hybrid components of both venous hemangioma and venous malformation.

Fig. 1: cVRT images, using different presets, demonstrate the anatomy of the left upper limb. The deformed bones (Fig. 1a) and soft tissue (Fig. 1b), as well as the normal arterial (Fig1c) and the excessively malformed venous structures (Fig. 1d) can be separately visualized.

Fig. 2: cVRT image, generated with fused tMIPs, show the vascular structures of the palmar side in detail. Both the arterial and venous structures can be simultaneously visualized.

Venous malformation (VM), often incorrectly called cavernous hemangioma, is actually a congenital vascular anomaly. It is classified in the slow-flow lesion category by the International Society for the Study of Vascular Anomalies (ISSVA). It presents at birth as nonproliferating vascular birthmarks composed of anomalous ectatic venous channels. [1] A malformation is a structural abnormality or an error of vascular morphogenesis. A hemangioma should be approached as a problem of increased endothelial proliferation. [2] An excessive hybrid venous malformation and hemangioma, such as this case, is rarely seen. A preoperative CTA can evaluate the vascular and bony structures in detail. Conventionally, images acquired in the arterial phase and venous phase need to be visualized separately. In this case, images acquired during three phases, scanned with the same parameters, are fused into one series using a special technique called Dynamic Angio. Temporal maximum intensity projections (tMIP) are then generated to simultaneously visualize both the arterial and venous structures. Lower kV and mAs settings for each phase acquisition are applied to improve contrast-to-noise ratio (CNR) and to reduce radiation dose. Images are demonstrated using cinematic volume rendering technique (cVRT), which produces photorealistic images with improved three-dimensional plasticity aspect of the anatomy by simulating the interaction of visible photons with CT volume data. As a result, the images are physically plausible and are instantaneously intuitive for the human brain, without the need for the physician to recreate a verbal description of the anatomy. This eases the communication with the patient and the surgeons, assisting a proper treatment planning.