Nuclear cisternography in the detection of CSF leak 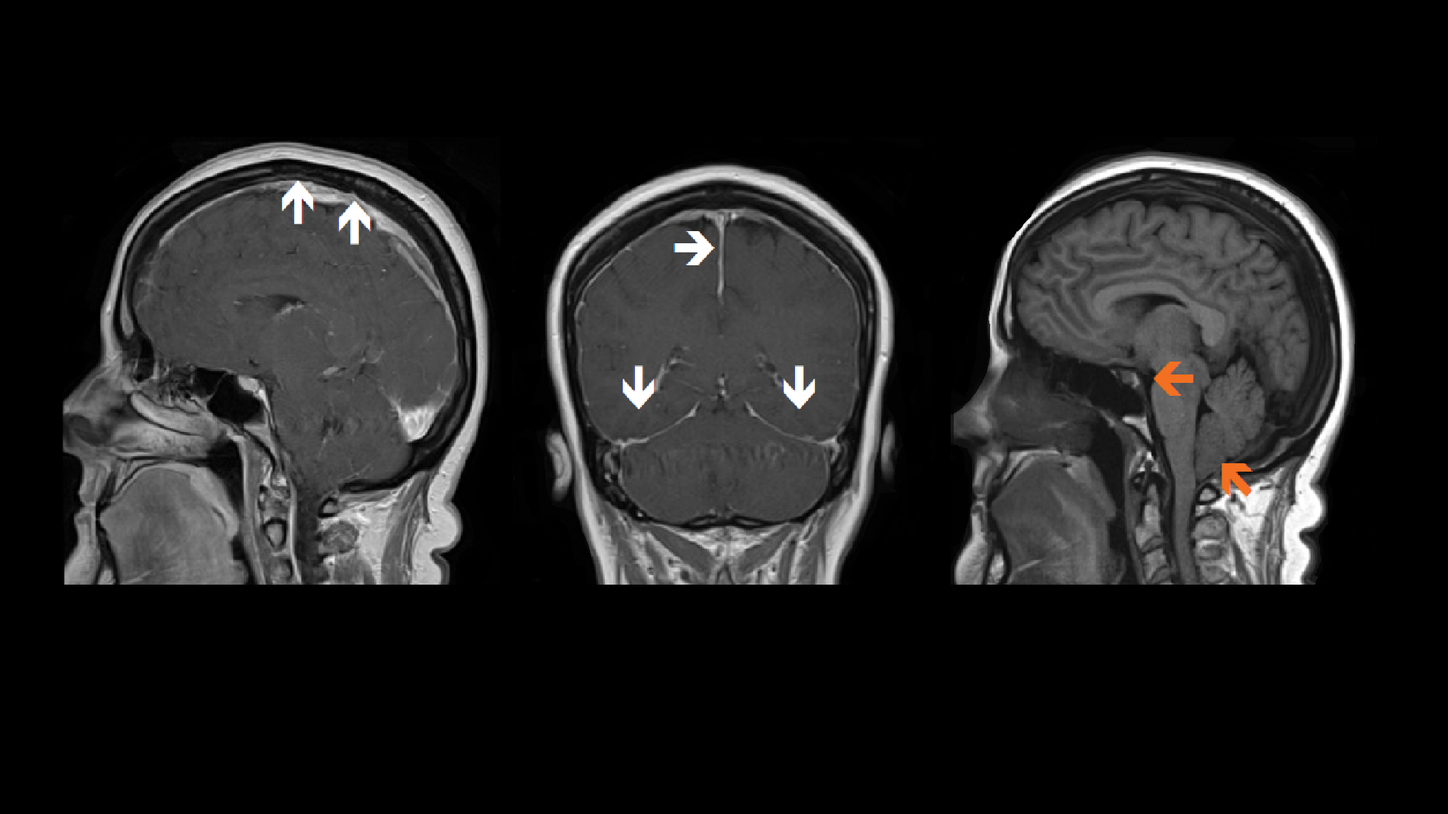 A 50-year-old woman presented with progressively worsening headaches and neck pain that persisted over several months. The patient reported the headaches initially occurred following bouts of coughing or sneezing, but were now more frequent. She also noted that they improved while in a recumbent position. There was no prior history of lumbar puncture or traumatic injury, and she had no intracranial shunting device in place. The patient also reported no visual disturbances, nausea, vertigo, clear nasal or ear discharge. As intracranial hypotension (ICH) was suspected, she underwent magnetic resonance (MR) imaging for further evaluation.

An MRI of the brain revealed findings pathognomonic of ICH: diffuse pachymeningeal enhancement and caudal displacement of the cerebellar tonsils with flattening of the pons (Figure 1). Given her history, the likely etiology of the ICH was determined to be a cerebral spinal fluid (CSF) leak. She subsequently underwent nuclear cisternography to localize the CSF leak and allow for directed epidural blood-patch treatment. In this case, the patient exhibits a classic presentation of ICH. In this context, MRI findings are pathognomonic of the diagnosis, with nuclear cisternography playing only an adjunctive role to localize the leak. However, had the patient presented with atypical symptoms, these same MRI findings would not have been pathognomonic as they are seen in other pathological states. As such, nuclear cisternography would have been crucial to clinch the diagnosis (see ‘Comments’ below).

Nuclear cisternography was performed on a Symbia Intevo™ 2 SPECT/CT following the intrathecal administration of 0.5 mCi (18.5 MBq) of 99mTc DTPA; immediate planar imaging was performed to confirm intrathecal deposition of the radiotracer. Delayed planar imaging at 4 hours, along the length of the spinal column to track cranial progression of the radiotracer, demonstrated abnormal activity adjacent to the distal-most end of the spinal column, bilaterally. Reflecting extravasation of activity at the distal spinal cord, this finding suggests a CSF leak at L1-L2. Subtle bilateral renal activity also observed (Figure 2A), and is an indirect sign of CSF leak. The patient subsequently underwent an epidural blood-patch injection. A follow-up nuclear cisternography performed 4 months later revealed resolution of abnormal radiotracer extravasation (Figure 2B).

First described in 1938 by German neurologist Georg Schaltenbrand, spontaneous intracranial hypotension is characterized by the onset of postural headaches that can often be, but not always, associated with neck pain, nausea, and vomiting. Atypical neurological presentations have also been reported including ataxia, Parkinsonian-like syndromes, short-term memory deficits, and even dementia.1,2,7 Although ICH’s prevalence is unknown, its annual incidence is estimated at 5 per 100,000 persons. This is thought to be an underestimation as some patients do not always present with the classic postural headaches and are misdiagnosed.1,2

Low CSF pressure has conventionally been thought to be the cause of spontaneous ICH, with the International Headache Society defining headache attributed to spontaneous ICH as, “orthostatic headache caused by low cerebrospinal fluid (CSF) pressure of spontaneous origin,” that, “remits after normalization of CSF pressure.”8 The etiology of this low pressure is a CSF leak, typically attributed to trauma of some sort that results in dural tears along the spinal cord.

The source of traumatic injury can range from major traumatic events such as motor vehicle accidents to more trivial instances such as vigorous coughing or sneezing, sporting activities, or heavy lifting. Other less common causes for CSF leak include connective tissue disorders, such as Marfan or Ehlers-Danlos syndrome, medical procedures (eg, post-lumbar puncture, postoperative, CSF shunt over-drainage), and even dural tears sustained from herniated discs or degenerative vertebral body spurs.2,3,5 The causality between a CSF leak and low CSF pressure in the etiology of spontaneous ICH is being challenged as literature demonstrates that some patients with characteristic symptoms and findings of spontaneous ICH have normal opening-CSF pressures. As such, there is a paradigm shift from the thought that low CSF pressure is the pathological foundation of spontaneous ICH. These normal opening-CSF pressures, accompanied by the characteristic symptoms of ICH, are thought to occur due to regulatory mechanisms that allow the preservation of CSF pressures in the face of low CSF volumes, even when CSF-leak flow rates are high. There is also the theory that low-volume CSF leaks are due to small dural insults, which can result in chronically low CSF volumes where, again, CSF pressure is maintained through regulatory mechanisms.7

Spontaneous ICH is suspected when patients present with classic postural headaches, with brain MRI being the first imaging modality utilized to evaluate findings once thought pathognomonic for the condition. These evaluations include enhancement of the eninges,
sagging of the brain—particularly the cerebellar tonsils—pituitary swelling, and venous engorgement. However, literature has shown that these MRI findings are not pathognomonic for spontaneous ICH as they can be seen in other neurological conditions such as Chiari I malformation, subdural hematomas, subarachnoid hemorrhage, and aseptic meningitis.2 As such, in patients who present with atypical symptoms, the condition can still be misdiagnosed despite the presence of these MRI findings. In such instances, nuclear cisternography is crucial as it is used to confirm the presence of a CSF leak, which yields a proper diagnosis.

This study allows for the assessment of the leak magnitude as well as localization of the leak for potential therapy planning. Findings seen on nuclear cisternography that are suggestive of a leak can be categorized as direct or indirect. Direct findings are any unilateral or bilateral visualization of the radiotracer adjacent to the spinal column activity, at one level or at multiple levels, that represent radiotracer extravasation via a dural tear. Indirect findings include renal and/or bladder activity as well as failure of the radiotracer to migrate to the bilateral cerebral convexities by 24 hours.9 Physiologically, these findings represent the presence of radiotracer in the extradural space that has reached the venous circulation. However, indirect findings alone can be seen even in the absence of a leak, such as occurs in patients with normal pressure hydrocephalus (NPH) or extravasation of CSF following the lumbar puncture necessary for radiotracer administration.9,10 As CSF leaks can often be subtle, excellent image resolution facilitates detection on nuclear cisternography. This is afforded by Symbia Intevo, which allows detection of even small leaks such as illustrated in this case.

Treatment of spontaneous ICH ranges from the utilization of conservative measures such as rest, hydration, or caffeine intake to more invasive procedures such as epidural patching with autologous blood, fibrin, or muscle and even surgical repair of dural tears, the latter facilitated by nuclear cisternography. 1,4,6

Spontaneous ICH can be a challenge to diagnose in patients who do not present with classical postural headaches. Nuclear cisternography aids in the diagnosis of this condition by confirming suspicious MRI findings and assessing the magnitude and spinal level of CSF leak. CSF leaks can be subtle to identify on nuclear cisternography. However, the excellent image resolution of Symbia Intevo allows detection of small quantity CSF leaks.