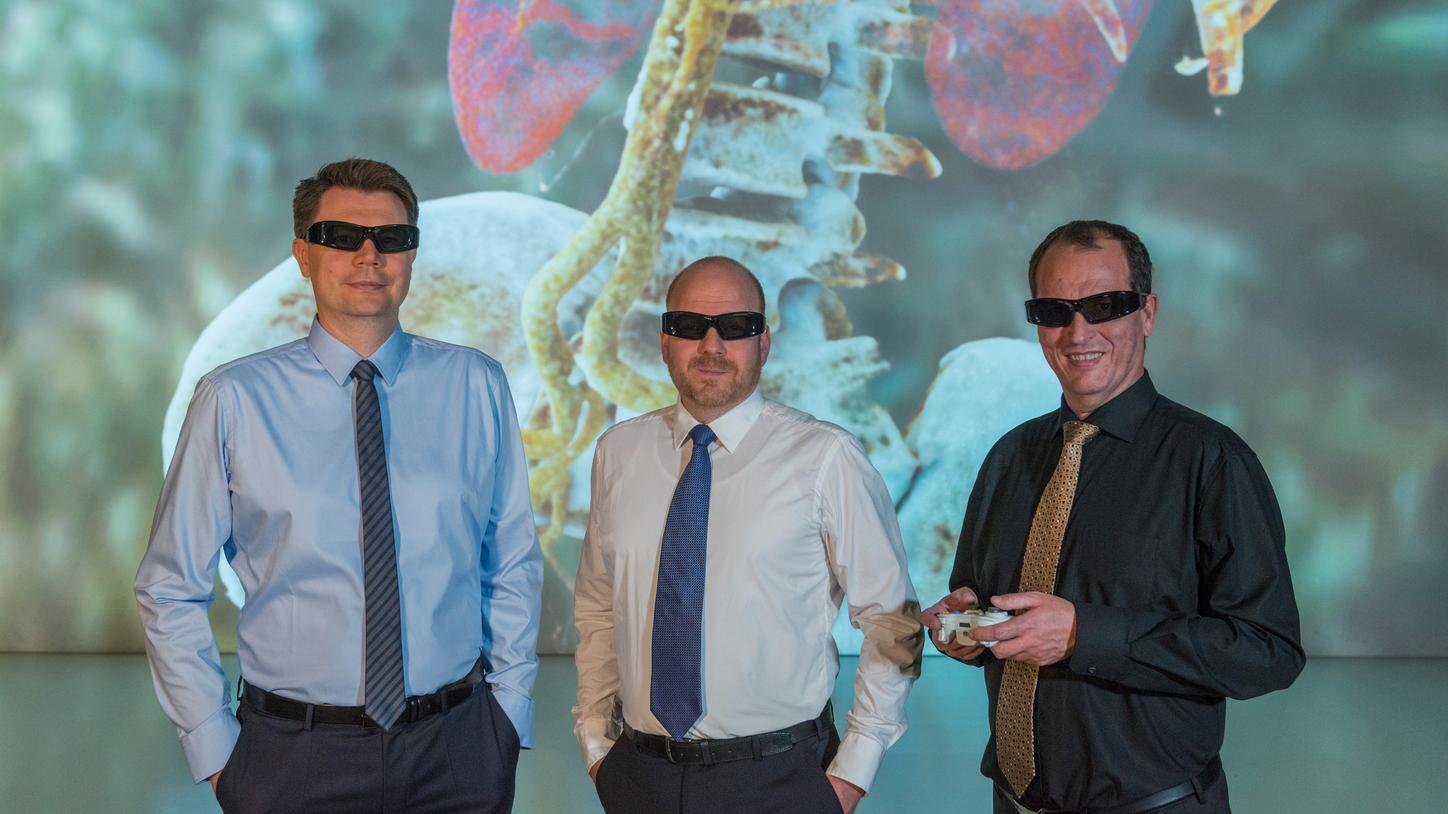 Siemens Healthineers employees Dr. Klaus Engel and Dr. Robert Schneider have been nominated for the German Future Prize along with Professor Franz Fellner, MD, head of the Central Radiology Institute at Kepler University Hospital in Linz, Austria, and extraordinary professor at the Friedrich-Alexander University Erlangen-Nuremberg, for the development of the visualization technology Cinematic Rendering. They are one of three research teams in contention for the award. The prize, awarded by the President of Germany, is one of the country's highest distinctions for technology and innovation. Cinematic Rendering technology, developed by the two visualization experts and their clinical partner, generates photorealistic three-dimensional representations of the human body from the output of CT and MRI scans. Using the radiological software Syngo.via and Syngo.via Frontier, the technique enables previously unseen levels of clarity. These striking new images simplify communication between physicians and patients or between radiologists and referring clinicians, help surgeons select the most appropriate surgical strategy, and open up new horizons in medical training. The German Future Prize will be awarded on November 29, 2017, by German President Dr. Frank-Walter Steinmeier in Berlin.
"The nomination of two of our leading visualization experts and one of our clinical research partners for the German Future Prize is a great honor for our company – and a testament to our sustained investment in innovation," said Dr. Bernd Montag, CEO of Siemens Healthineers. More than 12,500 patents are registered to Siemens Healthineers employees, while in the 2016 business year alone the company invested around a billion euros in research and development – a field in which it employs some 7,500 people. Siemens Healthineers draws on a collaborative network comprising over 4,200 research partners all over the world. "Time and again, our close collaboration with clients and research partners has enabled us to pioneer groundbreaking innovations in countless areas of medical technology and quickly bring them to market, benefiting users and boosting efficiency in healthcare systems worldwide, but above all increasing patient well-being. For many people, Cinematic Rendering offers the first real insight into what is going on inside their body. This example highlights the broad range of opportunities originating from the digitalization of healthcare," Montag explains.

Inspired by film technology and the physics of light

Klaus Engel and Robert Schneider developed the new visualization technology taking inspiration from film technology, and refined it in collaboration with Franz Fellner. Cinematic Rendering provides unprecedented photorealistic clinical images by leveraging the physics of light. A specially developed algorithm simulates the complex interactions of elementary light particles (photons) with patient data from CT or MRI scans. Unlike animations in the film industry, where only the light reflected off the surface of the character's body is calculated, the algorithm developed by the Siemens Healthineers researchers also takes into account the light which penetrates the subject's tissue, where it is scattered in different directions. This results in hyper-realistic representations of fractures, organs or the structure of the finest blood vessels.

Since early 2017, users of the imaging software Syngo.via have been able to create photorealistic images from any CT or MRI scan. These images facilitate communication between physicians and patients, for instance to explain a planned operation, but also between radiologists and referring physicians. The photorealistic images can vividly illustrate the course of a fracture line or the growth of a tumor. This does not involve any additional radiation exposure, as rendering takes place entirely in the postprocessing stage with just a few mouse clicks. Cinematic Rendering also offers great potential in fields beyond radiology: For instance, the heightened clarity enables surgeons to prepare interventions in greater detail, reducing the risk of complications. The benefits offered by the technology in its various fields of application – including forensics – are currently being examined in detail in a number of studies at European university hospitals.

These innovative images from inside the human body are also a boon to medical students studying anatomy. However, the new resource will above all benefit the large numbers of non-physician medical personnel who have no opportunity to explore the human anatomy in dissection courses. For two years, Professor Fellner has been successfully using Cinematic Rendering both for further education of medical personnel and as an information tool for laypersons.

Synergy between computer science and medicine

Klaus Engel, 47, holds a degree in information technology and a doctorate in natural sciences. He has worked for Siemens Healthineers in a variety of central research units. In 2014, he was appointed Principal Key Expert for Visualization in the Strategy and Innovation department. In 2016, Engel was named "Inventor of the Year" in the category "Single Outstanding Invention" by Siemens AG for the development of the Cinematic Rendering procedure, in which he has played a crucial role since the proof of concept and initial prototype stages. Key areas of Engel's work include optimizing the images' visual impact and migrating the technology to mobile platforms.

Robert Schneider, 47, holds a degree in mathematics and a doctorate in computer graphics. He is the Principal Key Expert for Visualization and Multicore for Syngo, the Siemens Healthineers business line dedicated to imaging software. Schneider's key contribution is the development of real-time algorithms that permit Cinematic Rendering image quality during a user interaction – an essential requirement for successful clinical use, as well for potential future applications in the field of virtual and augmented reality.

Franz Fellner, 51, holds a doctorate in medicine and a postdoctoral qualification in diagnostic radiology. He is the head physician of the Central Radiology Institute at Kepler University Hospital in the Austrian city of Linz, and extraordinary professor at the Friedrich-Alexander University Erlangen-Nuremberg. In 2011, he was awarded a distinction by the President of the European Society of Radiology for the best scientific contribution ("Challenges in Imaging"). As one of the first users of Cinematic Rendering, Fellner was quick to recognize the technology's potential, employing it in anatomy lessons and making valuable contributions to fine-tuning the technology and developing new clinical and non-clinical applications.

The German Future Prize was founded in 1997 by the then German President Dr. Roman Herzog, and has since come to symbolize the country's scientific potential and innovative spirit. Besides excellence in research, the main selection criteria considered by the jury include the development's patentability and market viability. The prize, which is endowed with 250,000 euros, has previously been awarded to Siemens employees in 2004, 2005, 2007, and 2012.

Further information and pictures are available at
www.healthcare.siemens.com/press-room/press-feature/pf-2017-09-zukunftspreis.

The products/features (here mentioned) are not commercially available in all countries. Due to regulatory reasons their future availability cannot be guaranteed. Further details are available from the local Siemens organizations.