Advancements in catheter therapy have in recent years turned stroke care upside down. Interventional specialists can often save patients with even the most severe strokes – provided the patients arrive at the hospital on time. All over the world, interventional radiologists are busy making sure that all patients who might benefit from catheter therapy get access to it. But there is still some way to go.

Organizing stroke care effectively is a task that many hospitals and regions have to address. Traditionally, patients with a suspected stroke were brought to hospitals with a stroke unit where they were diagnosed and, if possible, received IV thrombolysis as quickly as possible. Today, things are more complex: Modern catheter therapy allows doctors to remove the clot that blocks the brain artery in ischemic stroke mechanically, typically using a device called a stent retriever. In cases that are suitable for this type of therapy – patients with severe strokes in large vessels of the brain – the clinical results are often impressive, says Christian Loewe, MD, Head of the Department of Cardiovascular and Interventional Radiology at Medical University Vienna (MUV): “There are patients who can go back to work just weeks after a major stroke. This didn’t happen five years ago. We often receive thank-you letters. I can hardly think of another innovation in recent years that has transformed the delivery of care so profoundly for the better.”

“There are patients who can go back to work just weeks after a major stroke. This didn’t happen five years ago. I can hardly think of another innovation in recent years that has transformed the delivery of care so profoundly for the better.”

Christian Loewe, MD, Head of the Department of Cardiovascular and Interventional Radiology at Medical University Vienna

Christian Loewe, MD, Head of the Department of Cardiovascular and Interventional Radiology at Medical University Vienna

Stroke thrombectomy is highly effective, but it isn’t easy to implement: “We’ve moved away from very strict time windows. But the basic message for stroke care still holds: ‘time is brain’. We have to diagnose and treat as quickly as possible,” says Loewe. In order to make this happen, all relevant disciplines have to collaborate closely, according to Florian Wolf, MD, Deputy Head of Interventional Radiology at MUV: “This didn’t work particularly well at MUV in the beginning. But over time, we have managed to decrease door-to-needle time considerably.”

Speed is one factor that is critical for best possible stroke therapy. Proper equipment is another. The interventional radiology department at Medical University Vienna has recently acquired an ARTIS icono biplane angiography system from Siemens Healthineers. For Wolf, treating stroke patients with the new system is a huge step toward expanding precision medicine: “With two planes, stroke thrombectomy is safer, better, quicker. The risk of complications is lower, because the blood vessel anatomy is much clearer. In the past, we had to park the C-arm of the second plane to acquire 3D volumes. This is cumbersome, so we often did without it. Now we acquire 3Ds with two planes effortlessly. Neurointerventions are far more precise.”

The number of catheter interventions in stroke cases is rising worldwide. But there are still many patients with ischemic stroke who are candidates for a thrombectomy but don’t receive one: “In Vienna, we estimate that only one third of patients who would benefit from a stroke thrombectomy actually gets one,” says Loewe. There are several reasons for this: Preclinical and early clinical stroke care hasn’t adapted properly to the new realities in many places. Awareness campaigns notwithstanding, strokes are too often still diagnosed too late. Another problem in many countries is that there aren’t enough hospitals that offer neurointerventions in stroke cases.

“Angiography systems like this one offer the possibility to perform the necessary brain imaging in stroke patients right in the therapeutic setting. We can diagnose the patient and perform the intervention using the same system.” 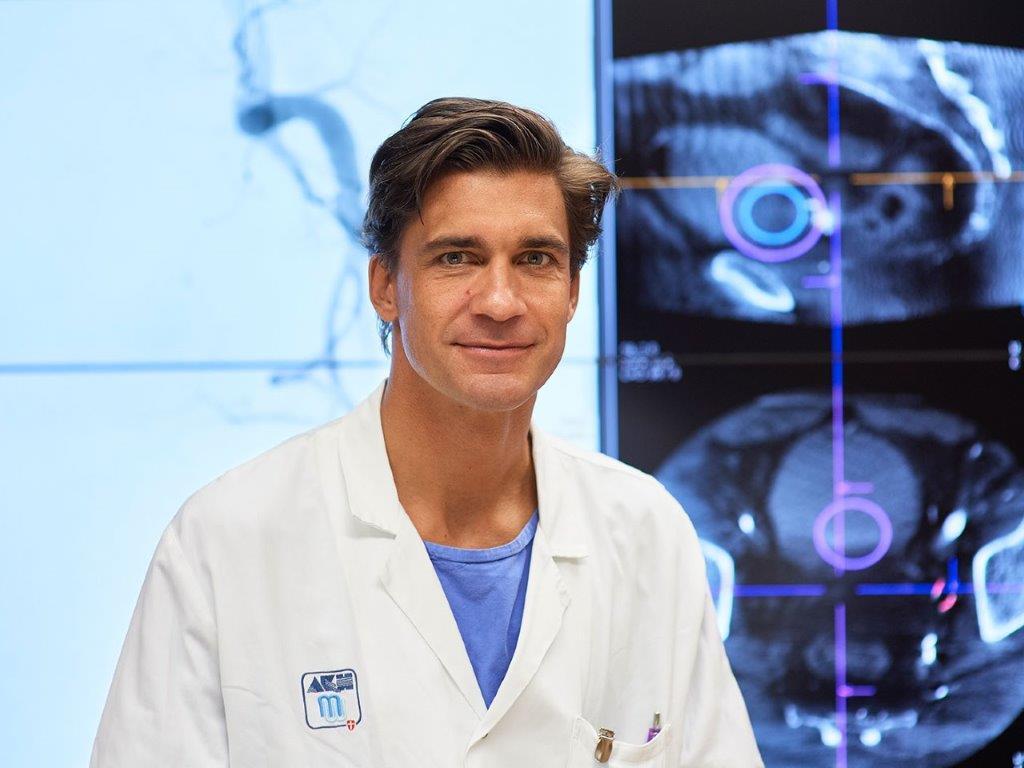 From a hospital perspective, an important question is how to make the most of investments when beginning to offer stroke thrombectomy with a modern angiography system: “Even for a university hospital like ours, it’s not possible to use a system to full capacity with stroke patients alone,” says Loewe. One solution is to use the system for other neurointerventions, in particular for coiling aneurysms. The interventional radiologists at Medical University Vienna don’t do this, however. Instead, they take a different approach: In addition to stroke thrombectomy, they perform body interventions.

“For liver embolization or prostate embolization, for example, the new biplane system is a big advantage,” says Wolf. “The second plane is also great for high-flow vascular malformations that require liquid embolic agents.” Even supposedly simple interventions – like placing a PEG tube – become more precise and comfortable with two planes. Wolf also explains the value for complex interventions: “I recently used it for a TIPS, and again it was very helpful. I took a quick look at the two planes and knew exactly where to place the shunt. By using the new biplane system for these and many other procedures besides thrombectomies, we manage to achieve full utilization.”

A bottleneck for the required expansion of interventional stroke therapy could well be the number of physicians able to perform it. For comprehensive coverage, many more experts will be needed than are currently available. One way of scaling up thrombectomy training is to use modern simulators.” Today, thrombectomy training is still largely ‘learning by doing’ during real interventions,” says Wolf. “But I am absolutely convinced that simulators are the future. A few years from now, every thrombectomy specialist will have practiced using simulators.”

The interventional radiology department at Medical University Vienna is currently in the process of purchasing a Mentice simulator. It can be connected directly to the display and tableside controls of the ARTIS icono: “This will allow our young colleagues to practice on real angiography tables and with real monitors, making the simulation even more realistic,” says Loewe. But real patients will always come first, of course.

Philipp Grätzel von Grätz is a medical doctor turned freelance writer. Based in Berlin, Germany, his focus is on biomedicine, medical technology, health IT, and health policy.