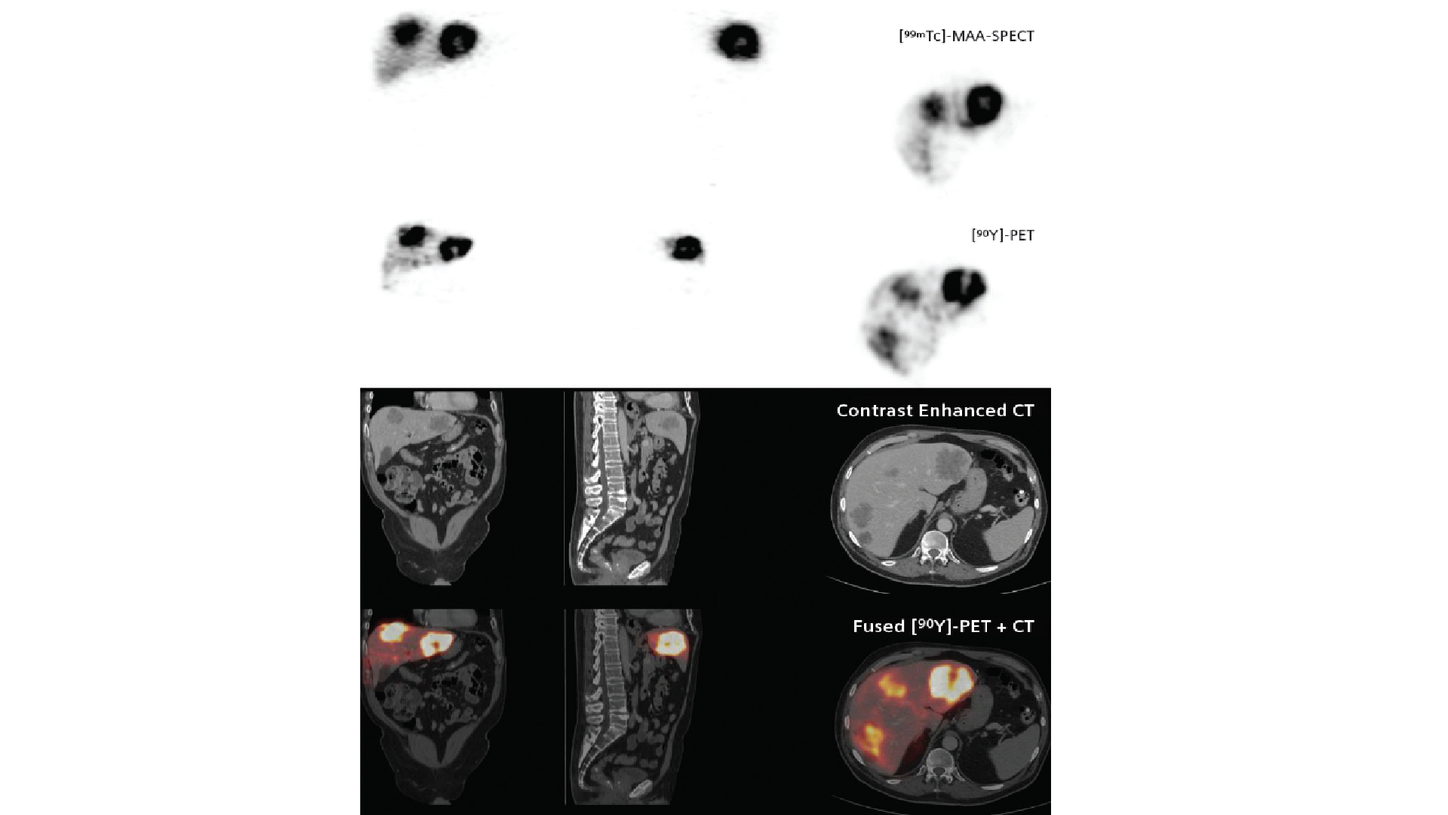 Standard analysis by planar whole-body imaging, and hand-drawn regions of interest (ROIs) over the liver and lungs, yielded a shunt fraction of 57%, greatly exceeding the accepted limit for treatment (≤ 20%). Fully quantitative SPECT/CT, with CT-derived ROIs around the lung and liver, was used for a more accurate assessment of shunting. The total amount of radioactivity in the lungs was measured to be 21 MBq of the 137 MBq that was administered (15%).

An independent measure of lung radioactivity, using a second injection of a calibrated amount of (99mTc)-MAA given intravenously, estimated this fraction to be 23 ± 5%. The quantitative SPECT measured 70 MBq for total deposition in liver, resulting in a lung-to-liver shunt fraction of 30%. The lung and liver radioactivity accounted for approximately 66% of the total radioactivity administered, and 88% of what was measured in the SPECT field-of-view. Other sites of accumulation of the radiotracer were noted (e.g., thyroid) on the whole-body planar images.

The patient demonstrated A-V shunting far greater than acceptable, and so did not proceed to therapy. Quantitative SPECT/CT was useful in deriving a more accurate shunting measurement. The measured fraction of injected dose present in the lungs could be used to estimate absorbed dose-to-lungs at therapy. In this case, assuming a 2 GBq SIR-Spheres dose, quantitative SPECT indicates that 15 Gy would be delivered to the lung tissue at therapy. While acceptable (below 25 Gy), it relies on the assumption that the lung activity is evenly distributed, and that the A-V shunting seen on the MAA work-up study will be replicated at therapy. Due to uncertainties associated with these assumptions, the Sirtex guidelines should be followed when evaluating patients for therapy.

SPECT/CT has significantly improved exact localization of extra-hepatic shunt of (99mTc)-MAA in patients with liver tumors being evaluated for 90Y microsphere radio embolization therapy. Correct localization and quantification of extra-hepatic shunting is key to further management decision-making for SIRT - which is made possible with SPECT and diagnostic CT combinations.

A 63-year-old male, with metastatic melanoma in the liver, received 1.9 GBq (90Y)-SIR-Spheres for treatment of liver-borne disease. The pre-therapy, planar imaging work-up demonstrated an acceptable shunt of 2.6%. Pre-therapy (99mTc)-MAA-SPECT/CT was performed on a Symbia™ T6. Twenty-four hours following the infusion of therapeutic dose of (90Y)-SIR-Spheres, a PET/CT study with contrast CT was performed on a Biograph™ mCT.

Quantitative analysis of the (99mTc)-MAA-SPECT/CT study showed that 72% of the injected activity was localized to the liver (some free pertechnetate was seen outside the field of view of the SPECT), with 15% of the total amount administered localizing in the tumor (as defined on CT). There was good correlation between the (99mTc)-MAA-SPECT and the localization of (90Y)-SIR-Spheres (PET) post-implantation. The lesions seen on the contrast-enhanced CT were well targeted by the treatment. The quantitative (99mTc)-MAA-SPECT/CT study was used to generate dose volume histograms (DVHs) of the tumor and healthy liver, assuming 100% (minus lung-shunt value) of the prescribed 90Y would be trapped in the liver. Predicted absorbed dose estimates were made for the time of therapy, which were compared with actual DVHs from the (90Y)-PET. The liver and tumor were predicted to receive a mean dose of 30.6 Gy and 92.7 Gy, respectively. The post-treatment analysis estimated an actual delivered mean-dose of 30.8 Gy and 85.9 Gy, with 72% of the tumor receiving greater than 50 Gy.

Quantitative SPECT allowed estimates of absorbed dose to volumes of interest to be predicted prior to treatment. In this case, the estimates compared favorably to the actual results from post-implantation imaging. Use of a reliable and accurate surrogate for shunt assessment, combined with quantitative SPECT, can potentially allow dose estimates to be used for improved treatment planning.

The shunt fraction computed, using standard methods on planar images of the liver and lungs, is semiempirical,as it does not normally include any correction for photon attenuation, which is different for the liver and lungs due to air in the thorax. Hence, while reduction in the administered amount of the therapeutic radioactivity can be implemented, depending on the fraction, it does not give a true indication of the amount of radiation bypassing the liver and depositing in the lung. This was seen in Case 1 when the amount of lung shunting, calculated by comparing the liver and lung ROIs on 2D whole-body planar imaging, appears to have greatly overestimated the actual fraction bypassing the liver and depositing in the lungs. Quantitative SPECT can provide this, permitting a direct comparison between SPECT and PET as in Case 2. The quantitative information obtained can be used to convert the measured radioactivity burden into an estimated radiation dose (MIRD methodology) and derive DVHs for the liver. This will give a better indication of the suitability of SIRT treatment and the maximum tolerable dose that can be delivered to effect tumor control while restricting liver and lung doses to tolerable levels. It will also enhance our understanding of the dose-response relationship for this type of therapy.

Quantification with SPECT/CT is made possible with CT attenuation correction and isotope-specific calibrations. Such quantitative measurements enable absorbed dose calculations for 90Y radio embolization based on (99mTc)-MAA uptake in the tumor and non-target liver and lung.

Would you like to provide detailed feedback?
125 / 125
1
Bailey DL, Willowson KP. An Evidence-Based Review of Quantitative SPECT Imaging and Potential Clinical Applications. J Nucl Med. 2013;54(1):83–9.
2
Willowson K, Bailey DL, Baldock C. Quantifying lung shunting during planning for radio-embolization. Phys Med Biol. 2011 Jul 7;56(13):N145-52.
The statements by Siemens Healthineers' customers described herein are based on results that were achieved in the customer's unique setting. Since there is no "typical" hospital and many variables exist (e.g., hospital size, case mix, level of IT adoption) there can be no guarantee that other customers will achieve the same results.