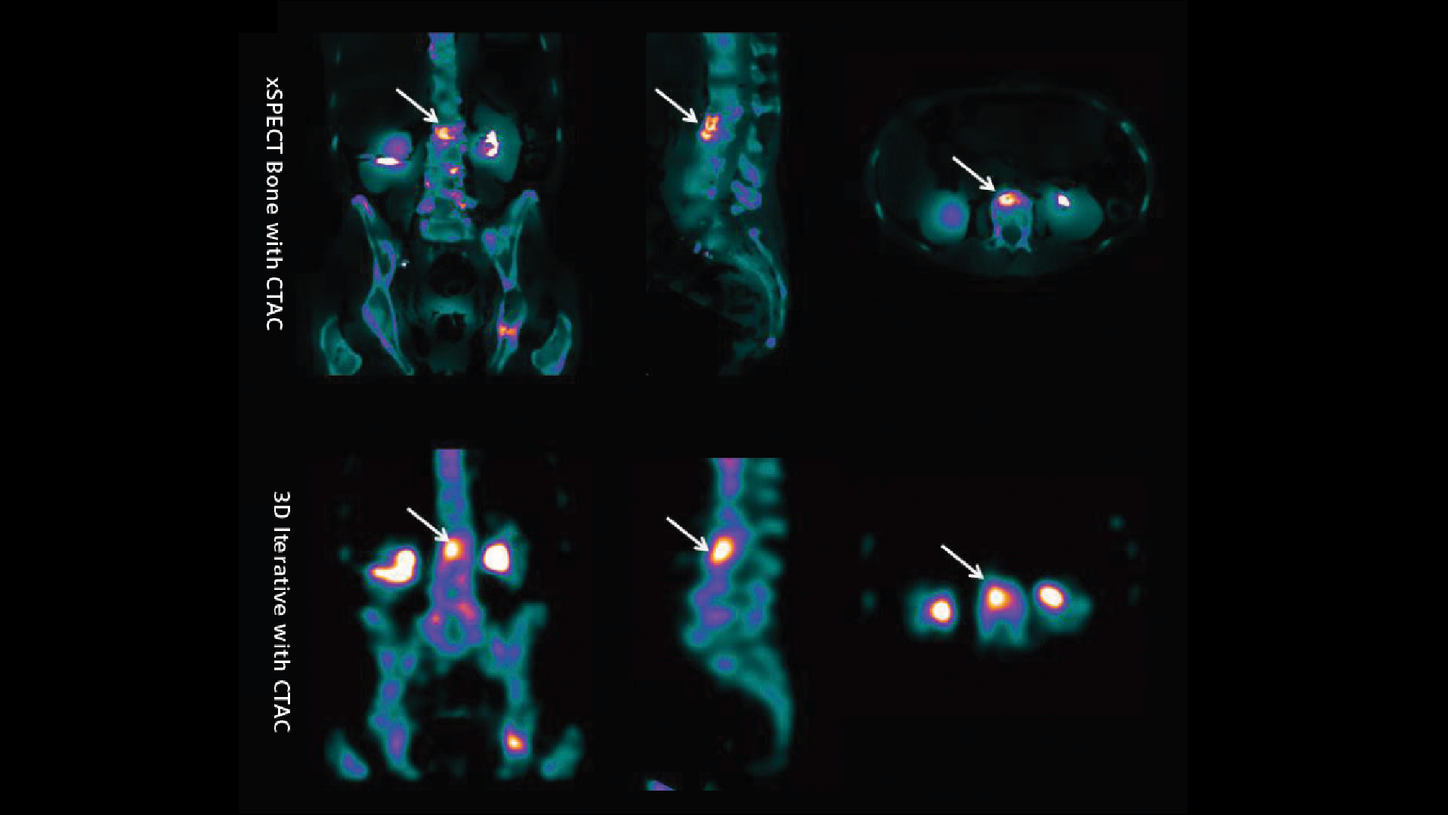 A 65-year-old female (157.5 cm [5 ft 2 in], 50.8 kg [112 lbs]) presented with severe back pain. X-rays of the lumbar vertebrae showed compression of the L2 vertebrae. The patient was referred for 99mTc DPD bone scan to evaluate the nature of the vertebral compression. The patient underwent an xSPECT Bone™ study on a Symbia Intevo™ with integrated thin-slice diagnostic CT of the lower thoracic and lumbar spine and pelvis. Standard 3D iterative reconstructions and xSPECT Bone reconstructions were obtained for comparison. xSPECT Bone was further fused with CT.

xSPECT Bone sharply delineated the increased uptake in the anterior half of the L2 vertebrae and the upper end plate of the L3 vertebrae, which co-registered exactly with the sclerosis seen on CT, clarifying, therefore, the diagnosis of partial anterior wedge collapse of the L2 vertebrae, secondary to osteoporosis, along with evidence of distortion of the spinal curvature secondary to collapse. Standard 3D iterative-reconstructed SPECT images did not show such sharp delineation of lesion due to lower resolution and blurred lesion margins. Exact characterization of the vertebral collapse was better performed with xSPECT Bone. The presence of severe osteoporosis was confirmed by the quantification of 99mTc MDP uptake in the lumbar vertebrae using xSPECT Quant, which showed significantly reduced SUV of the spongy bone in the vertebral body of the L1 vertebrae that is not affected by the vertebral collapse, when com-pared to the normal average for the same age group.

Would you like to provide detailed feedback?
125 / 125
1
Cachovan et al.EJNMMI Research. 2013. 3: 45.
The statements by Siemens Healthineers' customers described herein are based on results that were achieved in the customer's unique setting. Since there is no "typical" hospital and many variables exist (e.g., hospital size, case mix, level of IT adoption) there can be no guarantee that other customers will achieve the same results.