Evaluation of a retropharyngeal metastasis from papillary carcinoma of the thyroid 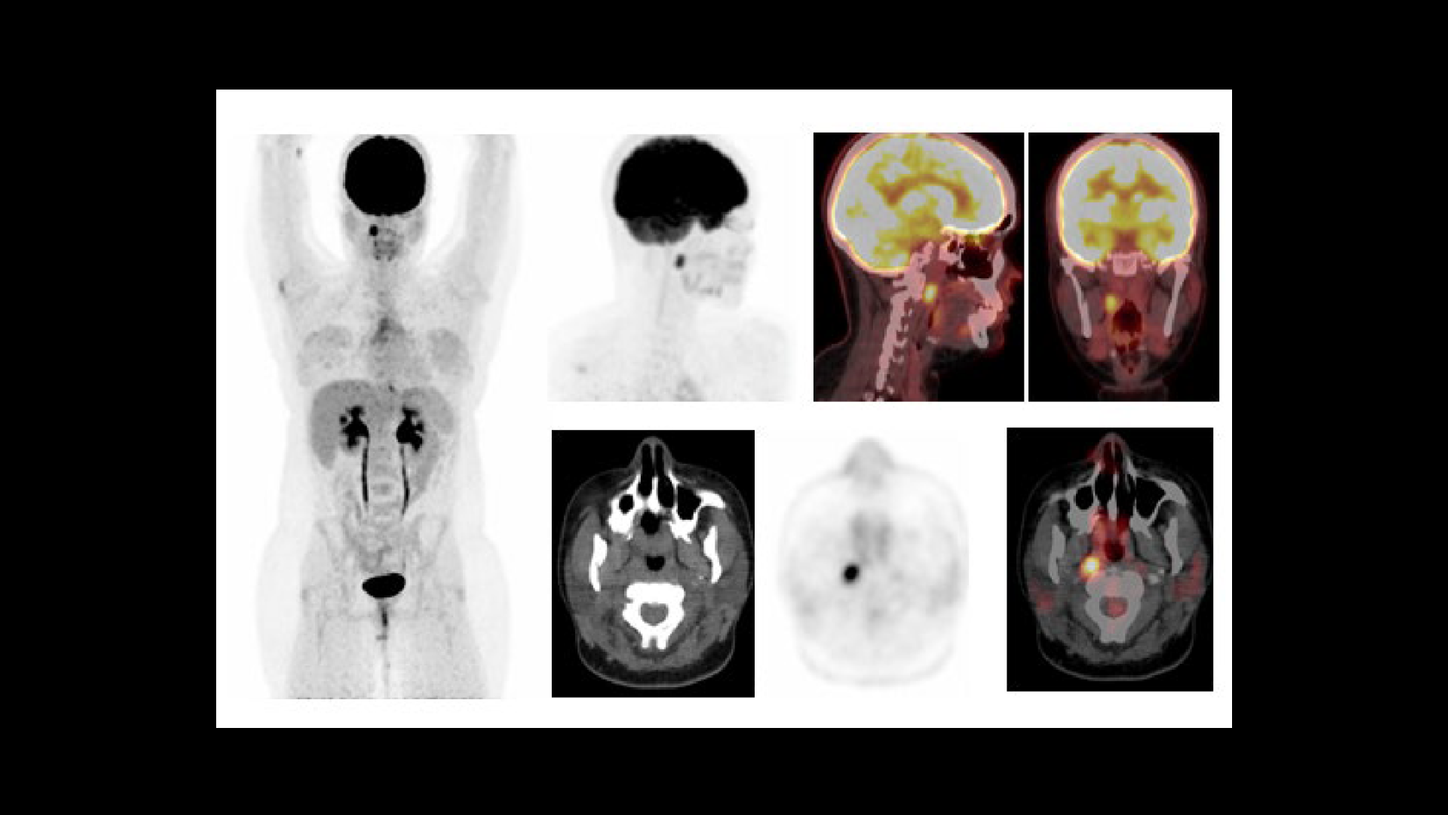 The patient underwent large-dose 131I therapy (200 mCi) in December 2014. A post-therapy 131I whole-body scan showed a focal area of increased uptake in the retropharynx and cervical region. The patient suffered severe sialoadenitis following iodine therapy and was on follow-up for 10 months. The patient then underwent serum thyroglobulin assay in October 2015, which showed a high value of 32.7 ng/ml. In view of the suspicion of nodal recurrence in the thyroid bed or neck, a neck ultrasound was performed in February 2016 that revealed an enlarged level III left cervical node, which was strongly suspicious for metastasis. Surgical removal of the left cervical lymph node was performed in March 2016 and the histopathology revealed a nodal metastasis from papillary thyroid carcinoma. A diagnostic whole-body 131I scan performed in June 2016 was negative, although a repeat serum thyroglobulin performed at the same time showed persistent high values (serum thyroglobulin in June 2016 was 27.8 ng/ml). In view of the lack of 131I-avid nodal metastases, and the patient’s refusal to undergo further large-dose iodine therapy due to complications from the first therapy, plans for a second radioiodine therapy were abandoned.

A repeat serum thyroglobulin performed in August 2017 showed a high value of 20.6 ng/ml. The patient was subsequently referred for Fludeoxyglucose F 18 injection (18F FDG) PET/CT followed by 68Ga DOTATOC PET/CT to assess the status of the retropharyngeal metastasis and to evaluate for new lesions.

As shown in Figure 1, an increased glucose metabolism in the right palatine tonsillar mass is suggestive of a glucose-avid metastasis from papillary carcinoma of the thyroid, which corresponds to the lesion previously delineated on the 99mTc octreotide somatostatin receptor scintigraphy.

As seen in Figures 1 and 2, as well as the comparison of 18F FDG and 68Ga DOTATOC uptake within the pharyngeal metastasis, the lesion shows a similar high level of uptake of both tracers that is possibly suggestive of an aggressive, poorly differentiated glucose-avid metastasis with significant somatostatin receptor positivity. The high level of 68Ga DOTATOC uptake even after four previous therapy cycles of 177Lu DOTATATE opens up the possibility of further therapy cycles.

The patient underwent a follow-up scan again in July 2018 and the serum thyroglobulin was measured at 17.4 ng/ml, which was slightly lower than the value measured in August 2017. The patient also underwent 18F FDG and 68Ga DOTATOC PET/CT studies with a similar acquisition protocol as the previous study. Both 18F FDG and 68Ga DOTATOC PET/CT studies showed the presence of the pharyngeal metastasis with slightly lower SUVmax (18F FDG SUVmax 7.9 and 68Ga DOTATOC SUVmax 8.9) as compared to the previous  study. No new metastases were visualized. The slight reduction of serum thyroglobulin and lesion SUVmax is a possible effect of the previous radionuclide therapy with 177Lu DOTATATE.

Although this study shows 18F FDG PET to have a higher sensitivity compared to somatostatin-receptor PET in radioiodine-negative thyroid cancer, studies show the value of 68Ga DOTATOC PET in the detection of thyroid carcinoma metastases, which were radioiodine negative as well as 18F FDG PET negative.4 In this study, 68Ga DOTATOC was positive in 33% of patients who had metastases that were radioiodine and 18F FDG negative where most of these lesions were poorly differentiated. The rate of somatostatin receptor positivity in 18F FDG and radioiodine negativedifferentiated papillary and follicular carcinomas was lower.

The present case highlights the synergy that may be achieved by combining 18F FDG and 68Ga DOTATOC PET/CT in patients with elevated thyroglobulin and negative radioiodine whole-body scans. Although 18F FDG PET/CT detected the hypermetabolic pharyngeal metastasis with high contrast, the high uptake of 68Ga DOTATOC with SUVmax levels similar to that of 18F FDG suggested the need to continue 177Lu DOTATATE therapy. The follow-up PET/CT study performed in July 2018 demonstrated a decrease in lesion SUV for  both 18F FDG and 68Ga DOTATATE PET/CT with no fresh metastatic lesion, which reflects the effect of previously delivered radionuclide therapy.

In a patient where all other therapy options were exhausted or rejected by the patient due to toxicity concerns, 177Lu DOTATATE therapy offered an alternative, which led to a slight decrease in serum thyroglobulin as well as a significant reduction in lesion uptake, as  evident in the follow-up study.