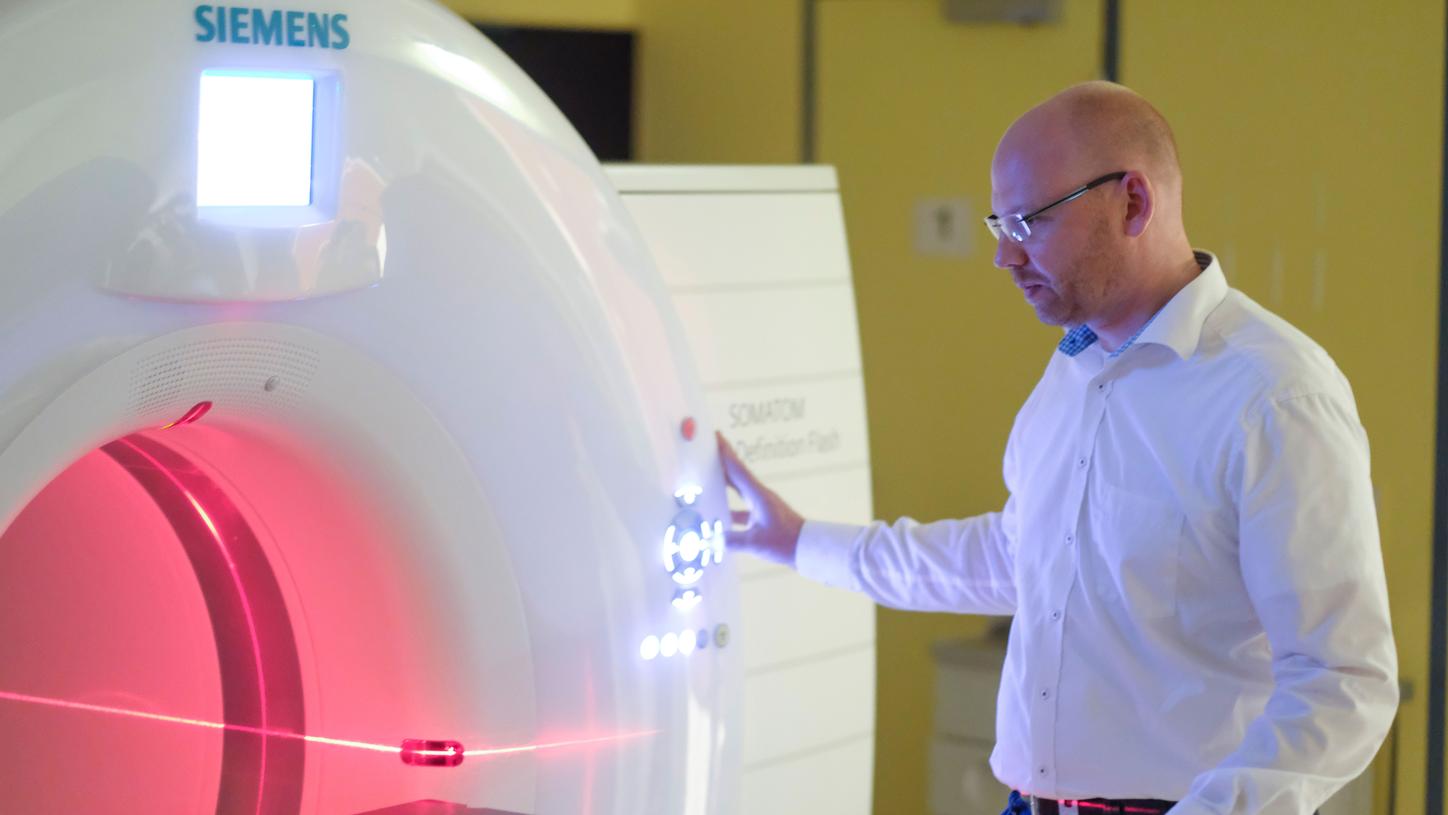 To use the precision and effect of ion beam therapy consistently, it is crucial to calculate the range of the particle beam exactly. Thanks to the method developed by Steffen Greilich, PhD, and his team, a new level of accuracy is now possible. Siemens Healthineers paid a visit to the head of the research group “Ion Beam Therapy“ at the German Cancer Research Center (DKFZ) in Heidelberg, Germany, to learn about the current status and clinical implementation of their development.

The view from the eighth floor of the DKFZ building reveals the dimensions of the Heidelberg campus with its research institutes and university hospital. Here in the Neuenheimer Feld, scientific and medical competence is concentrated, with approximately 11,000 people contributing to it. “On the left you can see the so-called Heidelberger hospital ring. There is also the Department of Radiation Oncology, which is connected to the Heidelberg Ion Beam Therapy Centre (HIT) by underpass,” Greilich explains. Research into the healing effects of radiation on cancer cells began here in 1906. As early as 1950, a center for radiotherapy was established and the potential of computed tomography (CT) for radiotherapy planning has been used and further developed since around 1980. Heidelberg is one of the world’s most important sites for oncological radiotherapy, especially those with protons and carbon ions. The Heidelberg Institute of Radiooncology (HIRO) has been in existence since 2010 and the DKFZ is one of its sponsors. Together with OncoRay in Dresden, it forms the National Centre for Radiation Research in Oncology (NCRO). The scientists at both locations work intensively together on the further development of ion beam therapy based on Dual Energy CT (DECT) images. The algorithms developed by Greilich and his team increase the accuracy of therapy planning.

Ionisation at exactly the right place

Ion beams are particularly suitable for the treatment of certain radiation-resistant tumors, for hard-toreach cancer sites, and for those in the immediate vicinity of risk organs. Greilich reports: “Ion therapy is the treatment of choice for skull base tumors. This is an established and frequent indication, the costs of which are also covered by health insurance funds in Germany.” Other tumors for which ion beam therapy is considered are salivary gland tumors, soft tissue sarcomas, and prostate carcinomas. According to estimates by the World Health Organization (WHO), about 60 percent of all cancer patients receive radiotherapy and about 10 percent could benefit from ion beam therapy.

The reason why particles such as protons and carbon ions are particularly predestined for this is due to their physical behavior: They release the majority of their energy to the tissue at the end of their path and come to a standstill shortly afterwards. As a result, tissue lying in front of the target volume is only exposed to very little load and the tissue behind remains largely untouched by radiation. The concentrated energy of ionizing radiation almost exclusively hits the tumor. This also reduces the risk of undesirable effects later on. In conventional radiotherapy, on the other hand, photons are used. “Actually, they are not so well suited for therapy,” explains Greilich. Photons release a considerable amount of their ionizing energy on the first few centimeters after entering the tissue, so that less energy reaches the tumor and a further portion leaves the body unused. By using sophisticated treatment techniques, the physical behavior of photons can, however, be partly compensated.

Steffen Greilich has been working on radiotherapy for almost ten years. He is particularly interested in the links between the smallest physical effects and biological changes. The scientist knows all too well that ion beam therapy can only turn the physical properties into therapeutic effects if the energetic particles stop precisely in the tumor and emphasizes: “If it is not known where protons and heavy ions stop in the body, the result of ion beam therapy is worse than with conventional photon therapy.” The problem regarding range has not yet been solved satisfactorily because clinically significant deviations can occur with the current calculation method. For example, protons directed at deep-seated tumors can penetrate tissue a few millimeters further than predicted. One focus of the Greilich research group was therefore to develop a more precise algorithm for predicting the range.

The basis for treatment planning is a three-dimensional reconstruction of the tumor and surrounding tissue using CT imaging. The standard method for this is Single Energy CT (SECT). Decisive values for therapy planning are the attenuation of X-ray radiation in tissues (Hounsfield Units, HU) and electron density. However, the translation of the HU into the relative electron density of the target tissue for dose calculation using the so-called “HU look-up table” leads to inaccuracies. Greilich explains the disadvantages of SECT: “With the conventional Single Energy CT, the clear information on electron density is superimposed with that of the atomic composition of the tissues. The atomic composition of the tissues is assumed to be the same in all patients but in reality it varies. The result is an ambivalent image.” When converting the ambivalent CT contrast into electron density, all tissues would be treated the same, Greilich explains. The same Hounsfield units mean the same electron density, but this would only apply if all tissues had the same atomic composition. But that is not the case. Overall, SECT can limit the clinical possibilities for photon and proton therapy on several levels:

The work of Greilich and his team as well as their colleagues at OncoRay in Dresden is based on Dual Energy CT (DECT). The aim was to use DECT in clinical application for ion beam therapy. By providing two images each at different energy levels, DECT can provide information on both the atomic tissue composition (or effective atomic number) and the electron density. These two values may help in determining an accurate estimation of the stopping power ratio of the tissue. This means that information is available for calculating the range of ion beams, which is not only much more precise but also patient-specific and personalized, so to speak.

DECT provides Greilich with all the information he needs to increase the accuracy of radiotherapy planning enormously. “In tissue experiments, we have an uncertainty range for the ion of 10 micrometers,” he notes. His confidence in the range prediction with DECT is very high. Greilich is sure that the advantages of ion beam therapy will be confirmed in long-term investigations. At the same time, other disadvantages of SECT are also avoided: Radiation exposure and workload are reduced because the additional native scan is not necessary and foreign materials are clearly identified. Moreover, their composition can be taken into account during treatment planning.

The joint work of the scientists in Heidelberg and Dresden began in 2014. Financial support for the DECT project was possible under the umbrella of the National Center for Radiation Research in Oncology. Once the algorithms of Greilich’s team had been understood and developed, the next major goal was to validate them. With a head phantom located in Dresden to mimic the complexity of biological tissue and geometric conditions found in humans, the approach was successfully tested. The stopping power ratio of the tissue can now be determined much more precisely. It has also been proven that the correction of the uncertainty with the algorithm actually works reliably in human tissue.

“The tests of the algorithms on biological tissues, the implementation of the algorithms, this collaboration between us and our Dresden colleagues works very well,” concludes Greilich. Since July 2017, patients in Dresden have already been benefiting from more precise ion beam therapy with the new DECT possibilities. Greilich sees the cooperation with Siemens Healthineers as another significant component of this successful development. On the one hand, Dual Energy CT was the only clinically established system of quality available in terms of both hardware and software, in Greilich’s experience. For the ion beam researcher, it turned out “that we work on the basis of perfect CT images.” On the other hand, it was crucial for him to understand, together with the developers at Siemens Healthineers, “that there is more to the software than just the calculation of electron density.”

With the possible range prediction, the field is now ready for clinical applications outside of research centers such as Heidelberg or Dresden. As Greilich explains, a clinically certified software is a prerequisite for this: “The state-of-the-art software allows the algorithm to work very well.” The Heidelberg researcher does not doubt that DECT is also suitable for conventional photon therapy. He is surprised that the advantages of DECT are not yet being used here. “In terms of photon therapy everything is on the table, one could simply start,” assures Greilich. The Heidelberg research group “Ion Beam Therapy” and its Dresden colleagues are already planning the next steps in the collaboration between HIRO and OncoRay. After the algorithms and their implementation, the focus is now on the clinical advantages and the reduction of the safety margins that are still common in radiotherapy.

Matthias Manych, a biologist, works as a freelance scientific journalist, editor, and author specializing in medicine. His texts appear primarily in specialized journals, but also in newspapers and online.

Would you like to provide detailed feedback?
125 / 125
The statements by Siemens Healthineers’ customers described herein are based on results that were achieved in the customer’s unique setting. Since there is no “typical” hospital and many variables exist (e.g., hospital size, case mix, level of IT adoption) there can be no guarantee that other customers will achieve the same results.