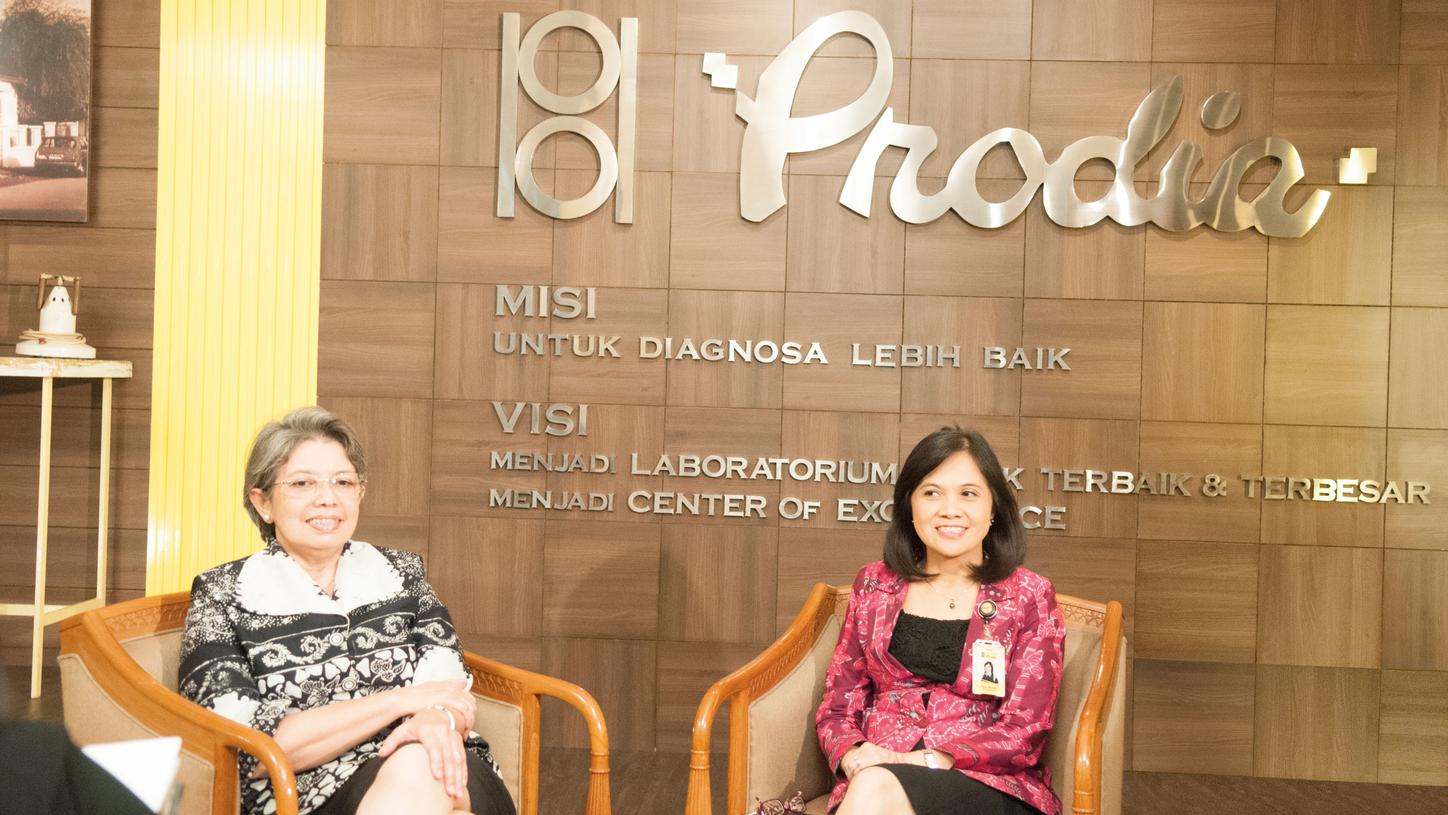 Over the next few years, Indonesia’s healthcare providers will race to meet the growing demands of patients while also ensuring that the highest standards are implemented. The Prodia Group, Indonesia’s leading laboratory, sees a window of opportunity to play a larger role in shaping the nation’s healthcare system.

Massive Transformation in Indonesia’s Healthcare Sector
The decade-long wait for universal healthcare coverage (UHC) was finally over when the government kicked off the plan in 2014. However, the rollout could be tricky for a geographically massive country that more than 250 million people call home. Not only is the health insurance scheme expected to cover the full population by 2019, but Indonesia’s healthcare sector is also struggling with the perception of providing low-quality services, poor infrastructure, and a lack of medical staff, among other things.

As expected, the UHC rollout has been welcomed by industry players including Prodia Group, a prominent player in Indonesia’s healthcare sector. “It is always exciting when you talk about the progress of Indonesia’s healthcare landscape, especially with the national insurance system now in place,” said Dr. Endang Hoyaranda, President Director of Prodia Group. “This is a gradual process that both the public and private sector need to tackle hand-in-hand. We have to admit that the process is very complex, starting from educating the people and changing their mindsets, to the conflicting regulations — not to mention the need to monitor all health facilities in the country.”

The health insurance scheme will allow Indonesians from all walks of life to be covered by health insurance, with a monthly premium starting as low as IDR25,500 (US$1.80) — making it a perfect solution for a country where an estimated 28 million people still live below the poverty line.

The much-anticipated scheme finally rolled out in late 2014 with the establishment of Healthcare BPJS, marking new hope for the country’s healthcare landscape. Earlier on, in July, the establishment of BPJS for workers’ social security was also completed as scheduled. The government expects to have at least 90 percent of Indonesia’s 250-million-plus population covered by the scheme by 2017, and full coverage by 2019.

SJSN still faces various challenges due to its massive scale and potentially conflicting regulations. The government has recently appointed BPJS chiefs to audit health facilities, and promises to enforce strict sanctions for those who do not comply with the regulations.

Opportunities for Businesses
Dr. Dewi Muliaty, President Director of Prodia Clinical Laboratory, believes that there are ways the laboratory can maximize its role in this transition period of UHC in Indonesia: “As stipulated, patients are automatically referred to the local community health center as the primary facility. Usually, middle-class workers would seek a secondary treatment from private laboratories because they couldn’t get the information from the community centers, or more importantly because they know this treatment is still covered by their employer.” Prodia has been closely collaborating with the partners of the two social security agencies in Indonesia throughout West, Central, and East Java, where hospitals tend to refer their patients to the laboratory for a secondary check-up.

The Boston Consulting Group1 predicted that Indonesia’s middle and upper classes, with monthly expenditure of US$200 and above, will increase from 75 million in 2013 to 141 million in 2020. While this presents massive opportunities for businesses, it also draws concerns from healthcare professionals. “Sadly, we need to acknowledge the fact that there is still a lack of trust between patients and healthcare professionals in Indonesia, which drives them to seek second or third opinions abroad,” says Muliaty. “What we need to actually improve is the comprehensiveness of our service — this is what patients are looking for.”

"People want a one-stop solution, an all-round service provider that is able to provide comprehensive and effective results.”

Prodia Group started in 1973 as a laboratory in Solo, Central Java, before extending its reach to major cities such as Pekanbaru, Medan, and Jakarta. From only nine branches in 1987, the group continues to expand massively. It reached a total of 250 branches all over Indonesia this year, including 119 fully equipped and licensed outlets. Aside from those facilities, Prodia also partners with hospitals and other clinics. Today, Prodia’s presence can be seen in 100 cities across 29 provinces throughout Indonesia. With over 4,000 employees, it has quickly established itself as the leading laboratory in the country.

This has made the Prodia Group the laboratory with the largest range of services in Indonesia to date.

The Need for Companion Diagnostics
Indonesia still faces several challenges in growing the personalized medicine business. “When talking about personalized medicine, we require an adequate supply of biomarkers, which are also known as measurable indicators of a biological condition. This is where the difficulty arises. In Indonesia, the number of biomarkers is still limited, and there are only very few labs with molecular diagnostics facilities at the moment,” Hoyaranda admitted. “My philosophy is that a drug is only as good as its biomarker. Without diagnostics, it will be very hard to prove the drug’s efficacy on the patient.”

Muliaty agreed with this: “Every person has a different immune system, DNA, and genetics. What works on Person A may not work for Person B, and so forth,” she explained. “Therefore, companion diagnostics help us to ensure patients’ safety by prescribing them the exact treatment that they need.” This fits perfectly with a country like Indonesia, considering its massive size and its ongoing struggle to eradicate endemic diseases.

Improved Efficiency in the Laboratory
Muliaty especially felt that the middleware — software that acts as a bridge between an operating system or database — has been particularly useful. “Usually, we’re required to process everything manually — from the test to the physical report that we need to submit to the patients. We need to validate and check them one by one, which can be time-consuming. With the help of this middleware, around 70 to 80 percent of the reports are automatically filtered; obviously this helps us save a lot of time, as it produces faster results.”

Prodia has been using Siemens as its vendor since around 2009, and the laboratory has enjoyed improved efficiency in its daily operations. Aside from faster turnaround times in analysis, Siemens’ automated laboratory system has enabled Prodia to be more effective by saving the work of two staff members during peak hours. In turn, this has a positive impact on productivity, as it enables the lab to serve more customers while keeping its operational costs at a more stable level.

A Collaboration beyond Partnership
For Prodia, partnerships with vendors are important because of the laboratory’s vision to always be one step ahead in the market. This goal can only be realized if the laboratories are supported by vendors whose vision is aligned with the company’s. Ever since Prodia’s inception, it has been positioning itself as a center of excellence, and has always been striving to be the first in the sector — be it in terms of providing the first solution to clients or having the first state-of-the-art system installed in its laboratories.

Prodia predicts the need for a wider adoption of automation in the future as patients’ demands for medical accuracy continue to soar. Muliaty hopes that more vendors will not only understand what their partners want, but also prioritize what the general public needs. This can be in the form of collaborating with Prodia to educate the patients though workshops or sharing sessions. When it comes to maintaining partnerships with vendors, Hoyaranda stressed the importance of recognizing mutual needs from each party. Prodia’s line of vendors, which includes Siemens, is often referred to as a helpful source of information for the company, as it enables the employees to expand their knowledge and practice, and at the same time provides them with the necessary technical and scientific back-up.

The Value of Partnership
From their ongoing efforts to achieve full nationwide insurance coverage by 2019, to curb the prevalence of tropical and infectious diseases, and to deal with issues resulting from the rise of the middle class, healthcare providers in Indonesia are forced to innovate and think on their feet to address the growing needs of patients, while ensuring the same, if not higher, level of service quality. Partnering with trusted vendors such as Siemens allows laboratories to ensure better accuracy in diagnostics testing. More importantly, it gives them an opportunity to provide the general public with better accessibility to healthcare services.

“Being the trendsetter in the country is not easy. We fully realize that the public always expects the best from us,” said Hoyaranda. “In fact, we are often known as the most demanding laboratory in the country because we will never stop until we know for sure that our validations are correct and that our patients’ safety is completely secured. And this is where we value the partnership with our vendors, because they help us keep our standard in check.”

“This is how we grew to be the leading laboratory in Indonesia — by answering the people’s demand.”

Would you like to provide detailed feedback?
125 / 125
1
Asia’s Next Big Opportunity: Indonesia’s Rising Middle-Class and Affluent Consumers. The Boston Consulting Group (2013)
The statements by Siemens’ customers described herein are based on results that were achieved in the customer's unique setting. Since there is no "typical" hospital and many variables exist (e.g., hospital size, case mix, level of IT adoption) there can be no guarantee that other customers will achieve the same results.