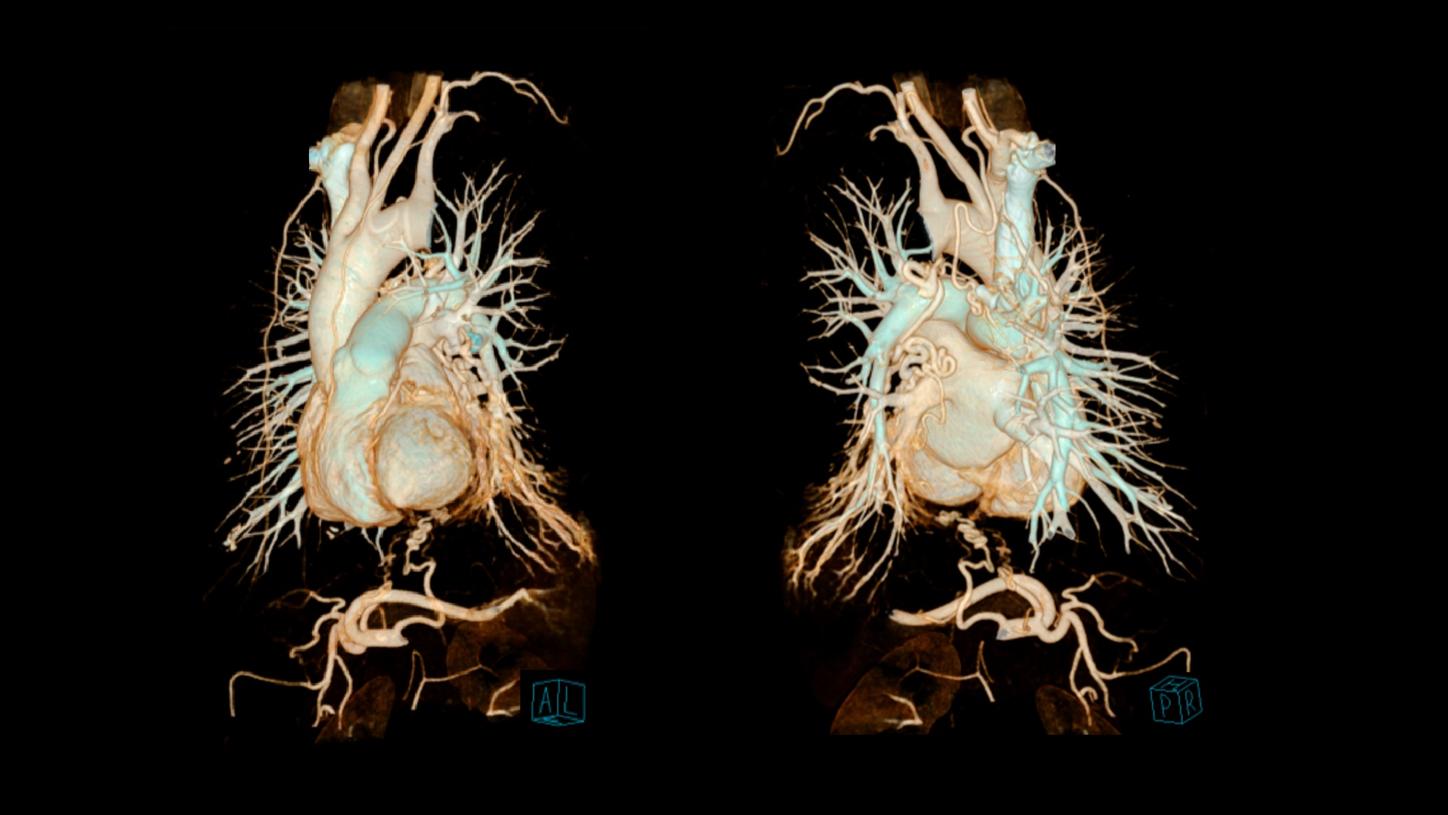 A 41-year-old female patient, suffering from intermittent hemoptysis over the past 5 days, was admitted to the hospital. She had had a known history of pulmonary tuberculosis, which had been cured 3 years ago. At admission, she reported neither coughing, fever, chest pain nor syncope. A chest CT angiography was requested to assess the cause for her hemoptysis.

CTA images showed four bronchial arteries (BA), two on each side, with three origins. The first two orthotopic BAs shared a common trunk, originating off the left-anterior wall of the thoracic descending aorta (TDA) at the level of the 5th thoracic vertebra (T5). The left BA was dilated, coursing down and connecting with the lateral basal segment of the left pulmonary artery (LPA). The right BA was proximally dilated and distally normal, running posteriorly along the right interlobar pulmonary artery (RIPA). A second left BA, originating off the left-anterior wall of the TDA approximately 3 cm below the common trunk, was seen extending into a tangle of dilated vessels and communicating with the left inferior pulmonary vein at two separate sites. Another ectopic enlarged right BA, originating off the proximal right subclavian artery (RSA), was visualized, descending tortuously along the posterior basal segment of the right pulmonary artery (RPA). Additionally, the left inferior phrenic artery, arising from the celiac axis, was also dilated and extended into the left lower lobe. These findings prompt a diagnosis of left BA malformations, along with hypertrophied right BAs and left inferior phrenic artery, indicating the causes of hemoptysis. A patchy area of consolidation with stippled hyperdensities in the right upper lobe and ill-defined areas of lung opacity, with signs of bronchiectasis in the left lower lobe, were visualized. This being consistent with the reported healed pulmonary tuberculosis. Subsequently, the patient underwent endovascular BA embolization, and her hemoptysis was resolved.

Figs. 1: Left-anterior view (Fig. 1a) and right-posterior view (Fig. 1b) of two cVRT images show an overview of the 5 abnormal arteries – the right ectopic BA originating off the RSA (dotted arrow), the orthotopic left and right BAs sharing a common trunk (orange arrows) and the second left BA (arrowhead) with its ostium approximately 3 cm below, as well as the left inferior phrenic artery originating off the celiac axis (white arrows).

Fig. 3: A cVRT image (Fig. 3a) shows the dilated left BA originating off the common trunk, coursing down and connecting with the lateral basal segment of the LPA (arrows), which is also shown in the axial views (Fig. 3b). A second dilated left BA is seen communicating with the left inferior pulmonary vein at two separate sites (Fig. 3a, dotted arrows). An ectopic enlarged right BA (Fig. 3c, arrow), originating off the proximal right RSA, and a proximally dilated right BA (Fig. 3c, dotted arrow) coming off the common trunk, are visualized, descending tortuously along the posterior basal segment of the RPA.

Fig. 4: A coronal MPR image shows a patchy area of consolidation with stippled hyperdensities in the right upper lobe, and ill-defined areas of lung opacity, with signs of bronchiectasis in the left lower lobe, consistent with the reported healed pulmonary tuberculosis.

Systemic vascular hypertrophy and bronchial artery malformation (BAM) are the common implications of hemoptysis. BAM is characterized by one or more tortuous and enlarged BAs, communicating with the pulmonary artery (PA) or pulmonary vein (PV). These manifestations demonstrate an effort of the enlarged arteries to maintain blood flow to the affected lung and to participate in the gas exchange. The hypertrophied arteries are thin walled, fragile and exposed to systemic pressure, making them prone to rupture into the airways, causing hemoptysis. Another acquired cause is an inflammatory or infectious lung disease, such as tuberculosis in this case. Recurrent airway inflammation leads to hypertrophy, dilatation, neovascularity and eventually to the rupture of the bronchial or non-bronchial systemic arteries also causing hemoptysis. Hemoptysis may become life-threatening and requires treatment with BA embolization. CT imaging with its 3D capability, allows for identification of abnormal systemic arteries and their origins as well as the disease process, providing a detailed vascular road map for the interventionalist prior to the procedure. One of the challenges of acquiring motion-artifact-free images with this group of patients is the inability of complying with breathing instructions, due to their critical situation. The images must be acquired with free breathing. In this case, an innovative scanning technique – Turbo Flash mode – with a dual source scanner, SOMATOM Force, is applied, enabling a high-pitch acquisition. A scan range of 34 cm is completed in 0.7 s resulting in optimal image quality. The tortuous and undulating courses of the abnormal arteries are best depicted and demonstrated in three dimensions using cinematic volume rendering technique (cVRT). A combination of the ultra-fast acquisition and the 3D capability plays a key role in a successful management of this case.