MyoglobinAn early biomarker to aid in the diagnosis of myocardial infarction

The Acute Care™ myoglobin assay is an in vitro diagnostic test for the measurement of myoglobin in heparinized whole blood /plasma. Myoglobin measurements can be used as an aid in diagnosing myocardial infarction. 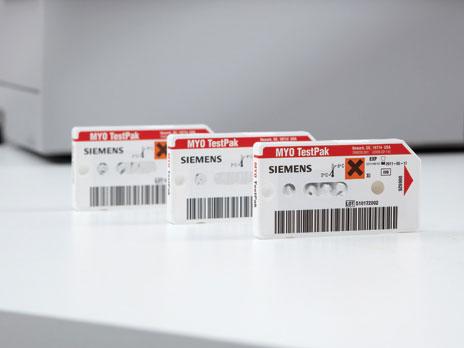 Following myocadial necrosis associated with myocardial infarction (MI), myoglobin is one of the first markers to rise above normal levels, increasing measurably above baseline within 2-4 hours post-infarct, peaking at 9-12 hours, and returning to baseline within 24-36 hours.1,2 In the absence of skeletal muscle trauma or other factors associated with a non-cardiac related increase in circulating myoglobin, myoglobin levels have been used as an early marker for MI.3,4 A number of reports suggest the measurement of myoglobin as a diagnostic aid in “ruling-out” myocardial infarction with negative predictive values of up to 100% reported at certain time periods after onset of symptoms.