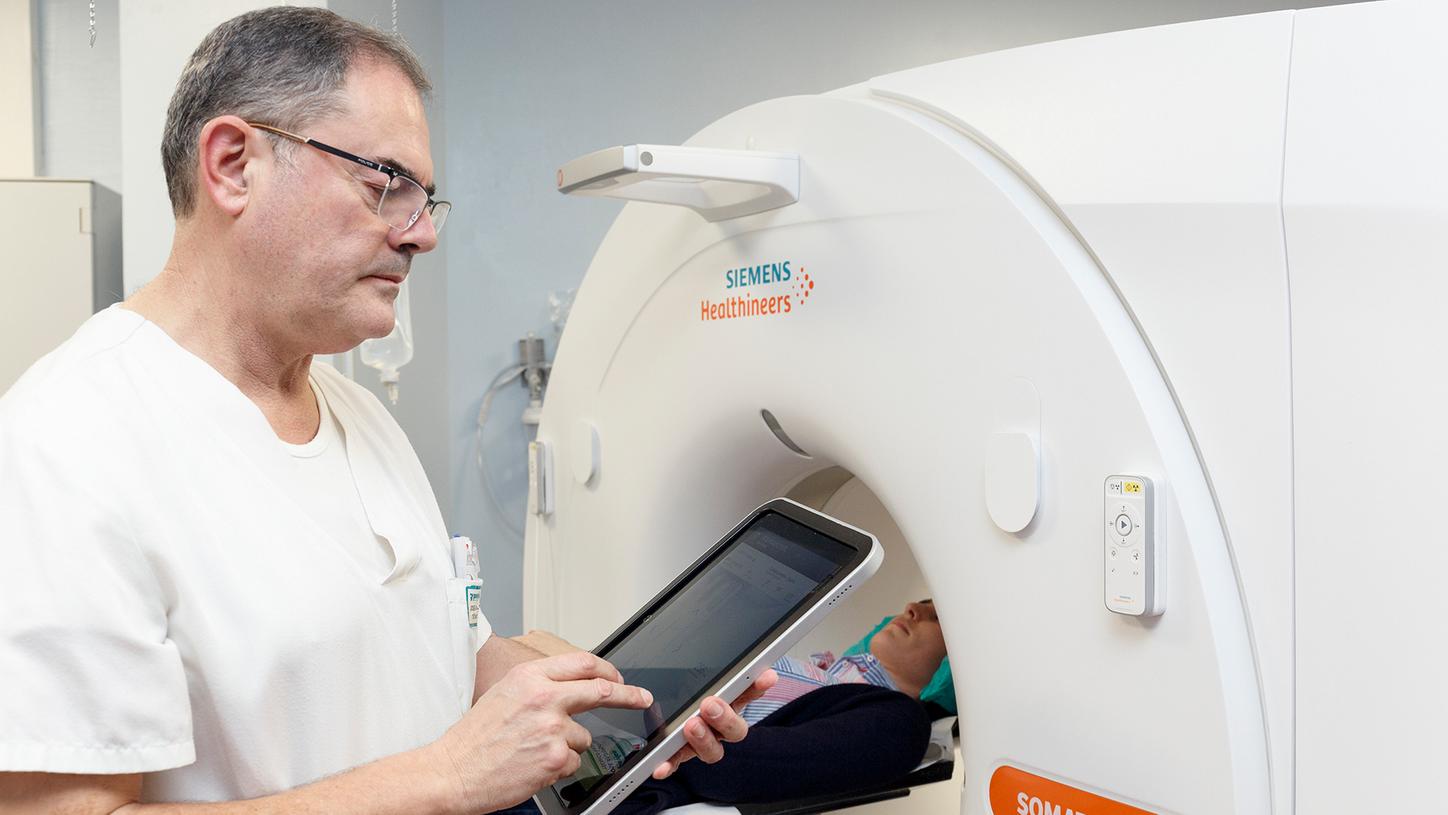 Povisa Hospital, a private facility in Vigo, Spain, focusses first and foremost on one thing: Patient-friendly care. This is why the clinic works with the latest in CT technology, allowing it to provide the best in healthcare, and to work quickly and as close to their patients as never before.

The radiology department at Povisa Hospital in Vigo, on the Galician Atlantic coast in Spain, is bustling with activity. What is usually a medium-sized private facility with 450 beds regularly takes on numerous national health insurance patients because the two public hospitals can’t provide care for the approximately 600,000 people who live in Vigo and the surrounding fjords in the extreme northwest of Spain.

Today, the private hospital is responsible for about 139,000 residents, which means a lot of work for radiology: According to chief radiologist Francisco Tardáguila, up to 20,000 CT scans are carried out each year by his 15-member team. And on this particular morning, around ten patients are already waiting in the corridor of the department for their CT scan.

Radiographer José Antonio Vergara goes into the waiting room and then escorts the next patient, an elderly woman, into the examination room. He helps her get into the correct position on the bed of the CT scanner. She looks a bit nervous, but thanks to the tablet, Vergara can stay at her side, speaking to her calmly, until the start of the scan.

“With the tablet,” Vergara explains, “I can move around much more freely and stay with the patients longer because I don’t have to constantly go back and forth between the CT and the control room to prepare the examination.”

This is especially helpful when the patients are children who, like the elderly woman, tend to be nervous. And another plus for Vergara: “The patients move much less, so the image quality is better and scans don’t have to be repeated because of motion in the images.”

The CT scanner also eases the testing of patients with cognitive diseases such as Alzheimer’s. “As soon as I’m in the control room,” says Vergara, “patients often forget their instructions or sometimes don’t even know where they are anymore, which of course makes the examination take much longer.”

“The tablet frees us up to spend more time with our patients and make them feel more comfortable.”

Despite all the technical benefits the new controller has for the radiographer’s work, he’s more interested in what it does for the patients. “The patient always comes first,” says Vergara, who has been working in the radiology department of Povisa Hospital for 21 years. “The controller frees us up to spend more time with our patients and make them feel more comfortable.”

Radiologist Carlos Delgado agrees: “Being able to see them and not have to communicate with them through an intercom is incredibly important to many patients. They just feel better cared for when we’re next to them. Together with fellow radiologists María Eloisa Santos and Gonzalo Tardáguila, Delgado was even able to prove this through an internal patient survey.

Over the course of several months, they divided their patients into two groups: For 33 patients, the examinations were prepared with the CT scanner and the tablet. While for 31 other patients, the examinations were prepared with a different CT scanner that didn’t have the new tablet feature. They chose patients with an average age of 59 and 63, who had previous experience with CT scans, and then afterwards asked them about various aspects of their examination.

In addition to more patient-friendly and faster examinations, the study also showed that the tablet and its associated one-room concept helped the radiology department achieve a real-time savings in their workflow. To do an examination of a patient without the tablet, the radiologists need an average of 7.29 minutes. But with the tablet the scan can be done in 6.15 minutes.

“Being able to see them and not have to communicate with them through an intercom is incredibly important to many patients.”

María Eloisa Santos and Carlos Delgado both see the low radiation dose of the new scanner as the main advantage. “Thanks to the Tin Filter and the Stellar detector, which allows iterative recon-struction, we’re able to work with very low X-ray doses while maintaining high-quality images,” says Santos, a neuro-radiologist at Povisa. The scanner already had a lower radiation dose than its predecessor models on the market. “However,” says Santos, “we were able to reduce the dose in the scan protocols to such an extent that, to give just one example, we now need ten times less radiation for inner-ear examinations than we need using other scanners.”

The older scanner requires a radiation dose of 1.25 millisievert for inner-ear imaging, but with the new scanner, Santos can reduce the dose to 0.16 millisievert. “What’s more,” the neuro-radiologist adds, “we believe the image quality to be even better than high-end scanners.” The team will be presenting the findings of their 140-patient study this May at Spain’s radiology conference in Pamplona.

It also proved to be possible for the Povisa radiologists to reduce the radiation dose for routine thoracic scans, from 5.5 millisievert with the older scanner to 1.9 millisievert with the new one, says chest radiologist Carlos Delgado. This reduction is even more extreme in lung screening examinations, where we are at levels comparable to a chest X-ray. And similar results were produced with head CT scans, where the radiation dose was significantly reduced.

In the field of pediatric radiology especially, and when examining sensitive organs such as the thyroid or mammary glands, explains department head Francisco Tardáguila, it’s of enormous importance to work with the lowest possible radiation dose. The European Union takes a similar stance to Tardáguila. In February 2018, the EU introduced new guidelines with a better radiation protection standard. At the same time, it also called for patients to receive more and better information.

“Patients aren’t familiar with radiation dosage or its consequences,” says Tardáguila, “and it’s up to us doctors to look out for the wellbeing of our patients and work with as little radiation as possible, even if the images might be better with more – that’s why we’re in such high demand here.”

And that’s why Povisa Hospital, as one of Spain’s nationwide radiology reference centers, became the country’s first hospital to launch the SOMATOM go.Up in 2017. In addition to other scanners with syngo.via, the hospital was also looking for a more cost-effective, yet fast, high-quality standard scanner with low radiation dose.

Manuel Meyer reports for Ärzte-Zeitung, a German newspaper for physicians and other medical professionals, from Spain and Portugal.