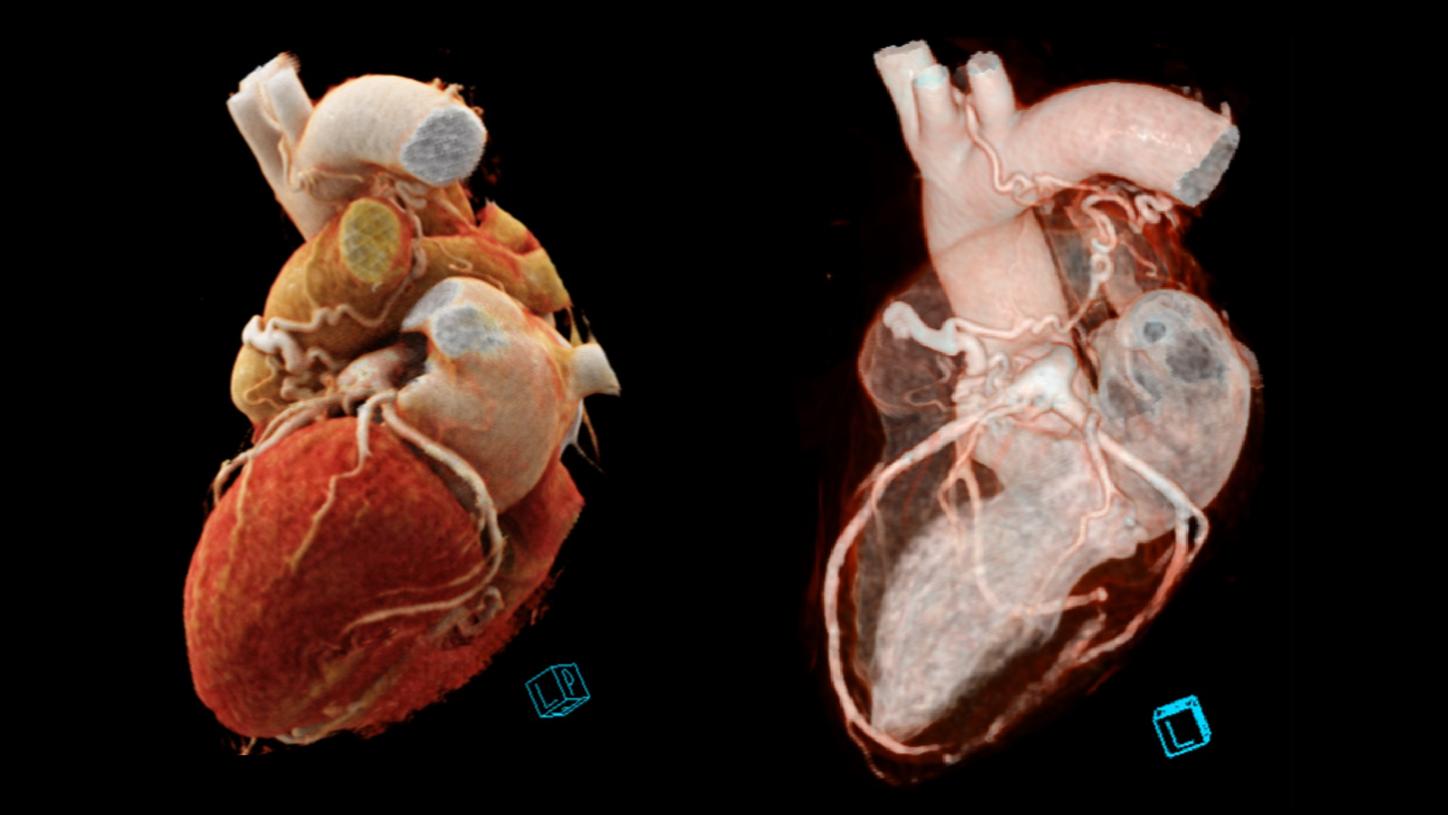 A 53-year-old male patient visited a cardiologist after receiving a positive test for Marfan’s disease. He was asymptomatic, had an unremarkable medical history and had been doing a daily 45-minute walk as a training routine. He was tested as a search for the carrier gene – his daughter, who had always presented very high height percentiles since childhood, had a positive genetic test for Marfan’s disease. A transthoracic echocardiogram was performed which revealed a mild prolapse of his aortic valve. A CT angiography (CTA) was requested for further evaluation of the heart and the aorta.

CTA images showed a fusiform aneurysmal left main coronary artery (LM). Three interconnected coronary fistulas were seen, all having a single origin and draining into three different sites. A left coronary intermediate branch, proximally dilated, coursing behind the proximal left anterior descending artery (LAD), was seen acting as the origin of the three, interconnected fistulas – the first was dilated and connected to the main pulmonary artery (MPA); the second, coming out of the first, was divided into an anterior and a posterior branch, wrapping around the left pulmonary artery (LPA), uniting again below the aortic arch, coursing upwards to connect with the proximal left subclavian artery (LSA); and finally, the third, extending from the posterior branch of the second fistula, laid its course towards the right, along the top of the left atrium, going behind the right superior pulmonary vein (RSPV) and around the superior vena cava, making a loop and joining the atrial branch of the right coronary artery (RCA). The proximal RCA showed a mild ectasia. A short segment of the distal RCA, located between the base of the right ventricle and the diaphragm, showed irregularities without plaques, suspicious of artifact caused by motion. Moderate stenoses were seen at the middle LAD caused by a calcified plaque. No signs of aortic abnormality were visualized. The treatment options for the patient are currently in planning.

Fig. 2: cVRT images show a fistula wrapping around the LPA, uniting again below the aortic arch and coursing upwards to connect with the proximal LSA (arrows).

Fig. 3: A cVRT image (Fig. 3a) and a MIP image (Fig. 3b) show a fistula coursing along the top of the left atrium, going behind the RSPV and around the superior vena cava, making a loop and joining the atrial branch of the RCA (arrows).

Fig. 4: Curved MPR images show a mild ectasia of the proximal RCA (Fig. 4a). A short segment of the distal RCA, located between the base of the right ventricle and the diaphragm, shows irregularities without plaques, suspicious of artifact caused by motion (Fig. 4a, arrow). Moderate stenosis caused by a calcified plaque at the middle LAD (Fig. 4b, arrow) is also shown. The LM shows a fusiform aneurysmal change. No abnormality is seen in the Cx (Fig. 4c).

Marfan syndrome, a hereditary disorder, is an autosomal dominant connective tissue disease with an estimated incidence of 1 in 5,000 individuals. The cardinal features involve the cardiovascular, ocular, and skeletal systems. [1] Early identification and appropriate management are critical for patients with Marfan syndrome, who are prone to the life-threatening cardiovascular complications such as aortic aneurysms and aortic dissection. In this case, a CTA for both aorta and coronaries were performed, with a single bolus of contrast injection. Both scans applied a special, innovative protocol, the “Turbo Flash mode”, allowing for an acquisition speed of 737 mm/s. The complete aorta is acquired in 1.2 seconds, and the coronaries in only 0.2 seconds. Aortic abnormalities are ruled out after the comprehensive evaluation using a dedicated application, the CT TAVI Planning. Three coronary fistulas are visualized, despite the complex anatomy, with optimal image quality owing to the high spatial and temporal resolution as well as the short acquisition time. Furthermore, cinematic volume rendering technique (cVRT) is used to facilitate a lifelike demonstration of the complexity of the multiple fistulas including their origin, drainage site, course and size, assisting in preprocedural planning and follow-ups.

*Continued right after the first scan.

The products/features (mentioned herein) are not commercially available in all countries. Their future availability cannot be guaranteed.