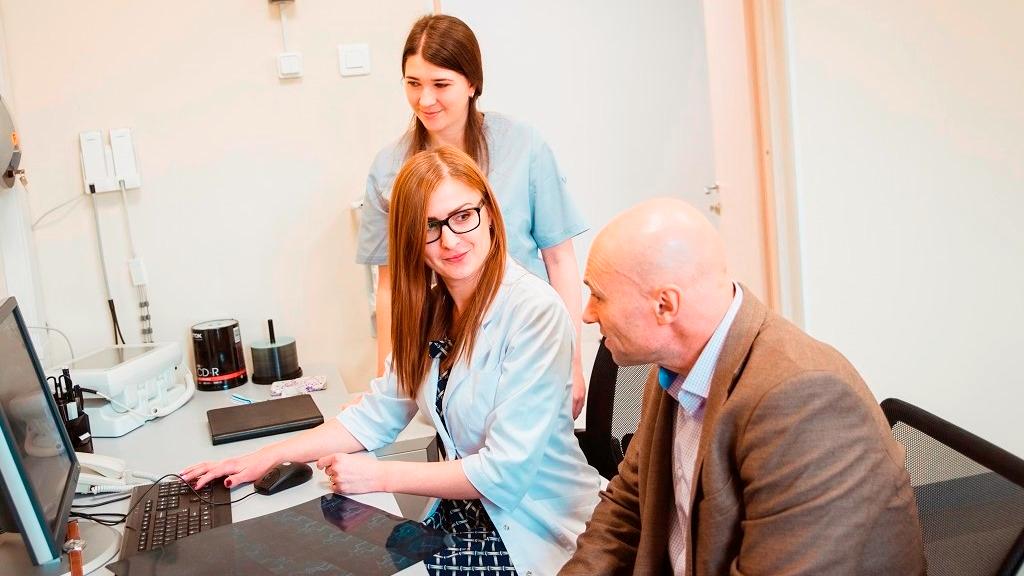 The Russian doctor Arkady Stolpner has been pushing oncology diagnosis and treatment forward for nearly 15 years. Now he is opening the first center for proton therapy in the post-Soviet region.

Next to a couple of new apartment blocks on the northern outskirts of St. Petersburg, nothing foretells that here, in the midst of a birch forest, a new chapter in Russian cancer treatment has just been begun. In October 2017, the first center for proton therapy not only in Russia but in the whole post-Soviet region opened its doors. It is an example of innovative entrepreneurship and a sustainable, trustful relationship between a customer and its suppliers of medical equipment.

Arkady Stolpner, MD, a man in his fifties and still full of energy, opens the doors of the newly-built clinic and leads us straight to its core: A nearly three-floor high apparatus, a ProBeam Superconducting Cyclotron that allows dose delivery to deep-seated tumors. The machine can be rotated 360°, delivering the beam at any desired angle – with the patient never seeing anything of the huge machine as he or she lies in a treatment room that is reminiscent of the interior of a spaceship in a Star Trek movie.

A cooperation that goes further

What Stolpner has accomplished here, with a private investment of 130 million USD, is the high-point of 14 years of engagement in oncology diagnosis and treatment. Back in 2003, Stolpner and his partner, the late Sergey Berezin, MD, founded the first privately owned magnetic resonance imaging center in Russia, the Dr. Berezin Medical Institute (MIBS). Over the years, MIBS has opened more than 90 diagnostics centers all over the country – providing one fifth of all diagnoses utilizing MRI in Russia – as well as centers in neighboring Armenia and Ukraine.

An example for public-private partnerships

An important factor for Stolpner’s success is his partnership with the state. For his latest project, the city of St. Petersburg provided the property at convenient conditions and took care of the communication lines and a link road. But even more important in a country like Russia, where the medical sector is still dominated by the state, are quotas for diagnosis and treatment. In the first year, of the 800 patients that can be treated at the facility, the city of St. Petersburg will pay for at least 100 people – with at least 50 of these being children. So far, all the other treatments will be privately paid. “In order to have a projectable future, we need more long-term agreements,” says Stolpner. He hopes that a certain law will be amended in the near future, making it possible to include institutions like the proton therapy center into state programs.

The Russian state certainly appreciates innovative entrepreneurs like Stolpner. Veronika Skvortsova, the country’s Minister of Health, commenting on the opening of the proton center in St. Petersburg, praised it as an example of public-private partnerships. “This is the future and the present of Russian medicine,” said Skvortsova.

Although the situation is improving, in Russia the overall risk of dying from cancer is about 60%, compared to 40% in the United Kingdom and 33% in the United States.1 The main problem is that people living outside of major cities have inadequate access to cancer care facilities, notes Paul E. Goss, MB BCh, PhD, professor of medicine at Harvard Medical School and director of breast cancer research at the Massachusetts General Cancer Center in Boston, in a report on Russia, China, and India in Lancet Oncology in 2014.2  Especially the availability of radiation therapy has declined since the collapse of the Soviet Union.

Strategies in the face of tough competition

In any case, the field of medicine in Russia has become much more competitive compared to 2003, when Stolpner and his partner started out. What is their business strategy amidst a competition that attracts clients with lower fares? “Service, reliability, competence, and efficiency,” is Stolpner’s answer. His new treatment center is a prime example: rooms flooded with light, a comfortable indoor climate, and special features for its very young patients, such as a small zoo with two monkeys named Quentin and Uma. A full-scale examination that may take two weeks as an inpatient in state-owned clinics can be done at MIBS facilities in two days – ambulatory. And the wide range of possible methods offers a varied treatment approach – and thus better chances for healing.

The basis of this clinical network is a strategic partnership with Siemens Healthineers. “We go together well,” Stolpner puts it. While Varian is the backbone of the network of centers in the field of ray treatment, Siemens Healthineers provides all the MRI and CT technology with ecoline systems – also at his new hospital. “What is most important for us are the low downtime rates of Siemens’ equipment,” says Stolpner.

But the cooperation doesn’t end with the purchase of equipment. Siemens Healthineers supports Stolpner’s efforts to develop the medical expertise in the region, for example with its annual School of Clinical Radiology, during which Stolpner gathers some of Russia’s best oncology experts in his facilities. He is proud to report that a team of these doctors recently published an article in the renowned British Medical Journal on “CT and PET/CT fusion for lung cancer biopsy planning”. Siemens Healthineers in turn profits from the expertise that Stolpner’s employees collect while working with their equipment – and then share with the company.

Stolpner was a pioneer when he opened the first privately owned MRT center in Russia – because 15 years ago there was a huge lack in the field of diagnosis. Nowadays, the waiting time for a MRT diagnosis in most parts of Russia is less than in France, according to Stolpner. That’s why he turned to treatment: In 2008, his clinic in St. Petersburg was the second one in Russia equipped with a Gamma Knife. In 2011, Stolpner added a Cyber Knife to his portfolio. With the completion of the proton therapy center MIBS is now state of the art in the whole post-Soviet region.

But Stolpner does not intend to rest on his laurels: He has recognized that a big problem in oncological treatment in Russia is the lack of council. “Your doctor may be a surgeon, a specialist in radiotherapy or chemotherapy. And he or she will treat you according to this narrow expertise,” explains Stolpner. That’s why, while building his new hospital, Stolpner made sure to include a room for consultation: with a special bench for the doctors and a big screen on the wall. “That’s where the doctors with different expertise will discuss a patient – and decide which combination of treatment will promise the best chances for healing.”

Moritz Gathmann has been working as a correspondent in Russia and other post-Soviet countries for a variety of German magazines and newspapers since 2006.

1
https://www.medscape.com/viewarticle/824151
2
http://www.thelancet.com/journals/lanonc/article/PIIS1470-2045(14)70029-4/fulltext
The statements by Siemens Healthineers’ customers described herein are based on results that were achieved in the customer’s unique setting. Since there is no “typical” hospital and many variables exist (e.g., hospital size, case mix, level of IT adoption) there can be no guarantee that other customers will achieve the same