Researchers at Central Manchester University Hospital in the United Kingdom conducted a study to optimize their time-of-flight-equipped PET/CT scanner. As a result, the institution adopted a new protocol that aids in the reduction of radiation exposure to patients and staff and provides the flexibility to perform more PET/CT scans per year.

The growing demand for PET/CT in oncology poses a challenge for Central Manchester University Hospital, with a projected 14 percent annual increase on scanning numbers. Its use of F 18 Fludeoxyglucose (18F FDG) in oncology produced reliable results, but there was a clear need to increase efficiency to accommodate this increasing demand. Additionally, the departmental physicists are always looking for ways to reduce radiation exposures while maintaining the same high quality results. Both staff and patients, some of them relatively young, were being exposed to relatively high levels of ionizing radiation during PET/CT scans.
New technology offered a possible solution. Central Manchester researchers found their solution in a Siemens Biograph™ mCT PET/CT scanner, equipped with TrueV and time-of-flight (ToF) technology. By measuring the actual time difference between the detection of each coincidence photon, ToF can localize the event within a small range along each line of response. This increases the signal-to-noise ratio (SNR) and enables faster scans, lower injected dose and improved image quality. 1,2

Though studies have shown that ToF improves both SNR and definition of small lesions, Manchester researchers had a more involved question: could ToF help them develop a protocol that could reduce radiation exposure while increasing flexibility in scheduling to handle the approximately 3,300 annual patient scans? Of that 3,300, about half of the annual scans are 18F FDG related, the other being for Rubidium-82 cardiac PET. Therefore, the Manchester team conducted two studies, examining different times for bed positions and doses. The team used a strategy of trimming photon counts with ToF reconstructions to simulate shorter bed times and less 18F FDG administration. Today, they use a protocol based on the weight of the patient that has reduced bed times and 18F FDG administration. They estimate that the changes have reduced radiation exposure for both patients and staff by up to 30 percent and have increased annual throughput by 100 scans. 3,4
Before, most UK institutions used a protocol from a government advisory committee (ARSAC, the Administration of Radioactive Substances Advisory Committee) with two prescribed 18F FDG dose levels (350 MBq and 400 MBq, based on weight), and a bed position segment time (2.5 minutes) that failed to reflect advances in PET detector technology and reconstruction algorithms. Central Manchester University Hospital was among those using the ARSAC guidelines.

Figure: Patient with a BMI of 33 kg/m2 was administered 365 MBq of 18F FDG and scanned at 60 minutes post-injection. The SNR measured in the liver is 10.1 for 3D-OSEM and 10.2 for ToF. The comparison between ToF and non-ToF acquisition demonstrates the ability of ToF to not only enable faster scans, but maintain a high lesion contrast. As such, facilities can reduce their levels of dose and still acquire adequate results. Data courtesy of Central Manchester University Hospital, Department of Nuclear Medicine, Manchester, United Kingdom.

“We followed the standard practice, and I always said, given our state-of the art equipment, surely we can do better,” said Ian S. Armstrong, principal physicist at the department, who spearheaded the research and was lead author on a publication of results. To explore the possibilities of ToF, the Manchester team developed a strategy: run patients through the scanner, and reconstruct the data without ToF. After that, the researchers used list-mode data to reduce photon counts and reconstruct the data again using ToF. Scan quality was evaluated by measuring SNR in the liver, standard uptake values (SUV) and a qualitative assessment of the images. The purpose of reducing counts was to simulate a reduction in bed times and also as a surrogate for reduced radiation exposure. To simulate reduced doses of 18F FDG, the researchers used a phantom to quantify the equivalence of reduced dose and reduced acquisition time.

In the next phase of the study, a new protocol optimized for ToF incorporated the findings of the first phase. Beginning in September 2014, the Manchester team switched from the 350 and 400 MBq doses of 18F FDG in favor of a 280 MBq dose administered to all patients, a reduction of 20 percent for the lighter cohort and 30 percent for the heavier cohort. In addition, the researchers adjusted scan times per bed positions based on weight or body mass index (BMI). Those weighing less than 85 kg (187.4 lb) and with a BMI of less than 28 spent two minutes per bed position. Those weighing 85 to 115 kg (253.5 lb), or having a BMI of more than 28, spent 2.5 minutes per bed position. Those with a body weight of more than 115 kg spent three minutes per bed position. Reducing the scan times per bed position to two minutes cut the total time for a six-position scan from 15 to 12 minutes and the time for a seven-position scan from 17.5 to 14 minutes.

The overall result was a significant reduction in radiation exposure to both patients and staff working with PET/CT, the researchers concluded. This is particularly important for patients with certain types of cancer, such as lymphoma. These patients may be relatively young, respond well to treatment, and are likely to undergo multiple PET/CT scans to monitor therapy response (the youngest patient in the study was 25 years old). Under the reduced dose protocol, there was a marked improvement in the flexibility of scanner scheduling. Additional scans such as local views or separate head and neck scans had less of an impact on workflow for the session, according to the researchers. They also observed fairly uniform gains in image quality (SNR) with ToF across the entire patient group: this was not anticipated.

“Based on time-of-flight theory, I was expecting small or negligible gains in the smaller patients, but for our data, that wasn’t the case,” Armstrong said. “This meant that we could focus further on the smaller patients to develop a weight-based protocol, reducing radiation dose further. Without this information we would have needed to be more conservative.” That finding led to an even more refined ToF 18F FDG protocol for patients weighing less than 80 kg (176.4 lb). The protocols were tested using 48 routine oncology patients who were given 280 MBq of 18F FDG (these data have not yet been published). Simulations using reduced counts were employed, as they were in the published study, for patients based on 4.0 or 3.5 MBq per kg (2.205 lb) of weight with measures of image signal to noise used to assess the consistency of image quality over the population. Having concluded that 3.5 MBq per kg was the more effective scheme, they compared SUVmax and found the fixed 280 MBq protocol and the 3.5 MBq per kg weight-based protocol produced essentially equivalent quantification. The protocol was adopted in December 2014, establishing the top 18F FDG administration level at 280 MBq. Bed times are two minutes per segment, but may be increased for larger patients. The weight-based protocol is also used in pediatric cases.

The Manchester team manually administers 18F FDG with either 3 ml or 5 ml syringes, without the use of an automatic injector. Compliance with the protocol at Central Manchester University Hospital has been very good. “The volumes that are dispensed can be quite small in some cases. The seamless adoption of the weight-based scheme with manual dispensing is a credit to the skills of our technical staff,” Armstrong commented. A look at administration levels for 136 patients following the weight-based protocol found clear reductions in 18F FDG administration, with smaller patients benefitting considerably. The median 18F FDG administration was 255.2 MBq, down from 280 MBq under the published protocol. “There were no real obstacles,” Armstrong said. “Time-of-Flight is a win-win. You can’t go wrong with it. Image quality is improved, being more consistent across our patient population, and quantification is preserved.” 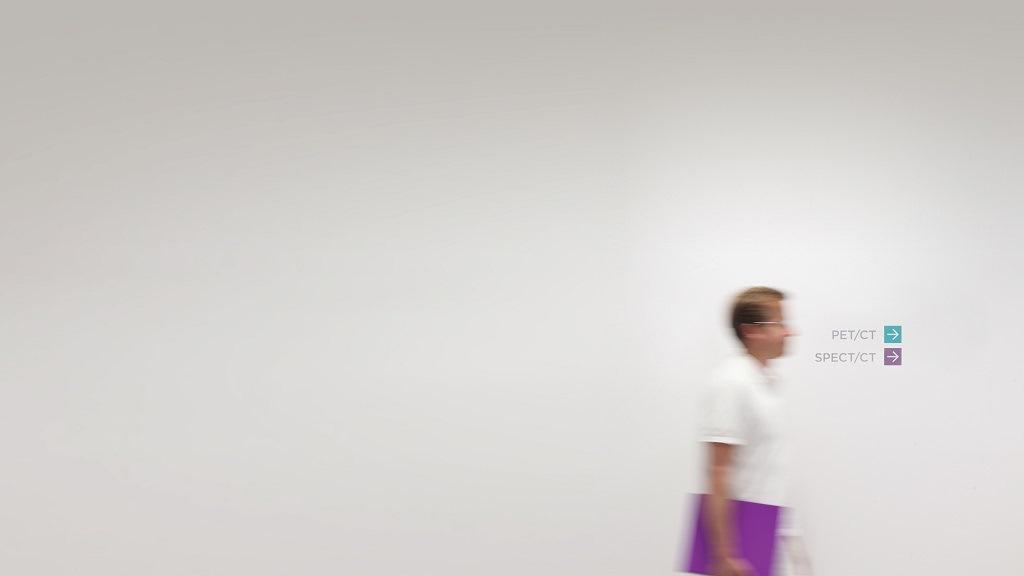 Radiologist Philipp Peloschek, MD, teamed up with nuclear medicine specialist Martha Hoffmann, MD, to establish the private Radiology Center in Vienna, Austria. Their collaborative approach to patient management offers a glimpse into what the future of imaging could be.

[4] “One hundred cancer patients a year in Manchester benefit from new scan technology.” MHS News Hub. The University of Manchester. Oct 27, 2015. Accessed Feb. 1, 2016.
The statements by Siemens Healthineers customers described herein are based on results that were achieved in the customer’s unique setting. Since there is no “typical” hospital and many variables exist (e.g., hospital size, case mix, level of IT adoption) there can be no guarantee that other customers will achieve the same results.