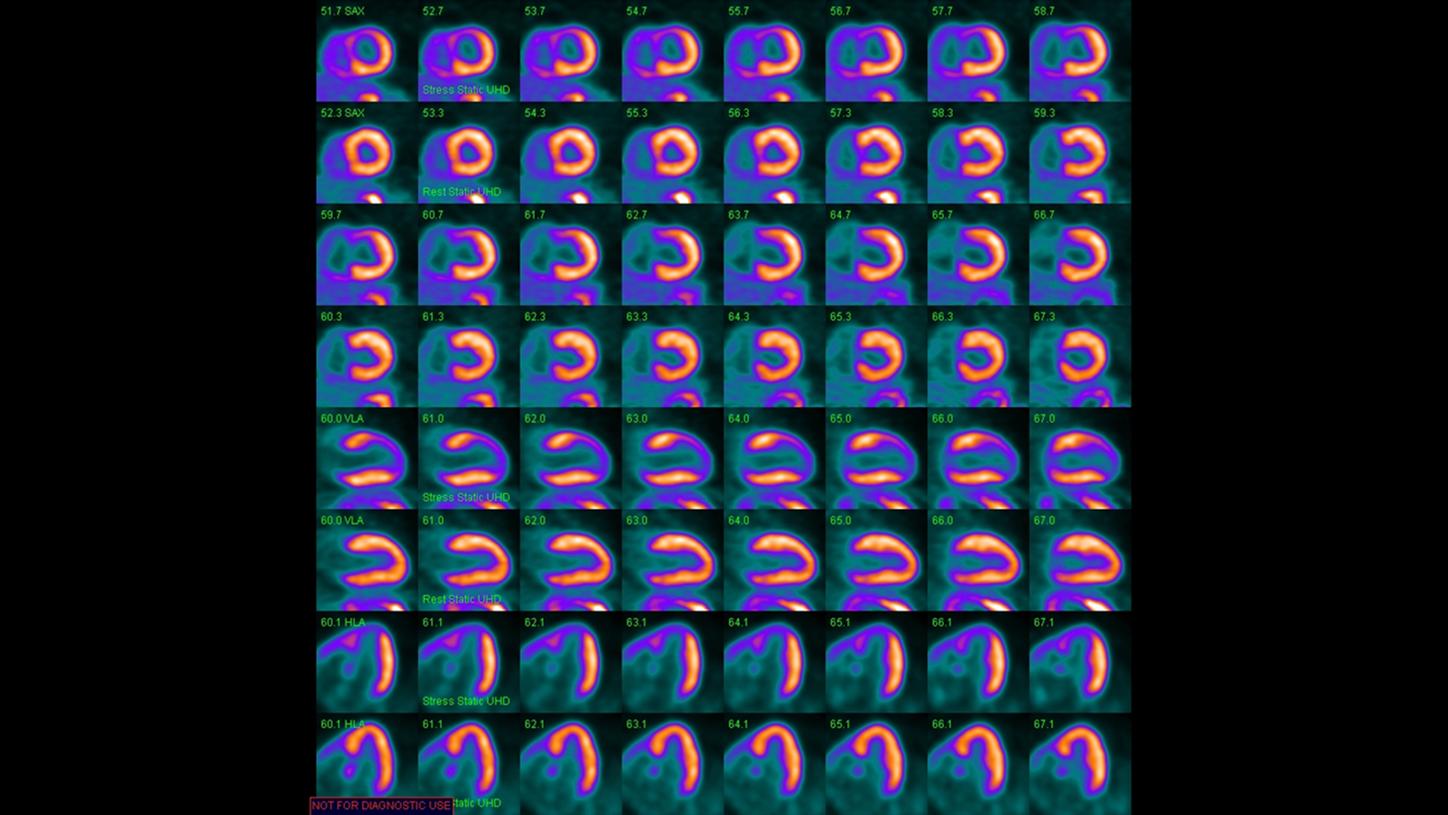 A 58-year-old man with a history of hypertrophic cardiomyopathy (HCM) presented with tightness in the chest and occasional chest pain. The patient had previously been treated with alcohol septal ablation for a left ventricular outflow tract (LVOT) obstruction secondary to HCM. The patient also had several risk factors for coronary artery disease including high BMI (36), hypertension, and diabetes. In view of the clinical possibility of coronary artery disease coexisting with hypertrophic cardiomyopathy, the patient was referred to a stress-rest 82Rb PET/CT myocardial perfusion (MPI) study.

The 82Rb PET/CT MPI study was performed on a Biograph mCT™ PET/CT system. An initial dynamic acquisition at rest was performed following an 82Rb infusion. Following an adenosine stress infusion, 30 mCi 82Rb was injected and was immediately followed with a dynamic list-mode acquisition for 7 minutes. Both rest and stress PET imaging were preceded by a low-dose CT acquisition.

As evident from stress-rest images obtained from the initial 82Rb MPI PET/CT study (Figure 1), there is a large reversible perfusion defect in the anterior wall and apex as well as an adjacent septum reflecting inducible ischemia in the left anterior descending (LAD) territory. The fixed perfusion defect in the upper and basal septum reflects alcohol injection related to the ablation performed previously for relief of left ventricular (LV) outflow obstruction secondary to hypertrophic cardiomyopathy. Significant stress induced LV dilatation reflects the severity of the LAD territory ischemia with complete reversibility of the ischemic zone demonstrated by normal LAD territory uptake and normal LV cavity size at rest. In view of the PET/CT demonstrated LAD territory reversible ischemia, the patient underwent cardiac catheterization.

In view of the significant LAD stenosis demonstrated on the coronary angiography (Figure 2), the patient underwent stenting of the LAD lesion. Coronary angiography identified additional plaques in the mid- and distal LAD and left circumflex, which were not considered flow limiting and therefore intervention for the plaques was not performed. Angiographic images acquired immediately following stent placement showed a normal LAD flow restored (Figure 3). A follow-up 82Rb stress-rest PET/CT MPI study was performed one year post-percutaneous coronary intervention (PCI) as the patient was admitted with troponin negative chest pain. The study was performed to assess the significance of plaque disease elsewhere, to ensure stent patency, and to rule out microvascular ischemia. The repeat PET/CT study was performed using exactly the same acquisition protocol as the initial study.

As evident from Figure 4, the follow-up 82Rb stress-rest MPI study shows normal perfusion in the LAD territory, which reflects patent LAD stent. A comparison of pre- and post-stent MPI studies show significant improvement in LAD territory perfusion along with a gross reduction in transient ischemic dilatation as seen in the follow-up study and reflects the reduction of LAD territory ischemia following the stent placement. The basal septal fixed perfusion defect related to alcohol ablation of the upper septum for the LVOT obstruction relief appears similar to that seen in the initial MPI study. Overall, the impression from the follow-up 82Rb PET/CT shows significant improvement in the LAD territory perfusion and reflects a successful stenting of proximal LAD stenosis in this patient with coronary artery disease co-existing with hypertrophic cardiomyopathy.

Patients with hypertrophic cardiomyopathy may have angina as a dominant symptom. Co-existing coronary artery disease in patients with hypertrophic cardiomyopathy has been reported in 25% of patients with HCM who are over 45 years of age.1 Evaluation of these patients should consider the pathophysiology of both LVOT obstruction and consequent ventricular dilatation secondary to an HCM. Additionally, ischemia should be evaluated secondary to coronary stenosis since the clinical effect may be disproportionate to the severity due to myocardial hypertrophy. In the current patient, initial evaluation and therapy was primarily driven by the focus on relieving the LVOT obstruction, for which basal septal alcohol ablation was performed. Any symptoms related to co-existing coronary artery disease may have been attributed to the LVOT obstruction initially. Persistent angina-like symptoms (even after relief of LVOT obstruction) led to consideration of the possibility of co-existing coronary artery disease.

A stress-rest 82Rb MPI PET/CT scan clearly demonstrates reversible ischemia in the LAD territory, which correlated with proximal LAD stenosis seen on the angiogram. Following LAD stenting, there was symptomatic relief of angina with normal perfusion to the LAD territory restored as demonstrated by the follow-up 82Rb MPI PET/CT. In spite of the obesity (BMI 36), the 82Rb perfusion PET images show excellent image quality, definition of uptake within myocardium as well as clear definition of ischemic zone, reversibility as well as fixed perfusion defects in the basal septal ablation zone. The image quality of such a study is a testament to the high count rates achieved by the Biograph mCT PET/CT system as well as the robustness of the CT attenuation correction in PET/CT technology. The dynamic imaging acquired with PET/CT during and immediately following vasodilator infusion (which helps to clearly define post stress LV dilatation) reflects the severity of myocardial ischemia and is another helpful indicator of disease severity.

In the current patient, although the significant stenosis is limited to the proximal LAD, the significant post-stress LV dilatation is most likely related to the large extent of LV territory ischemia caused by stenosis of a dominant LAD. Stenting of the proximal LAD lesion demonstrated complete resolution of ischemia and post-stress LV dilatation as seen in the follow-up study. This further confirms that the LAD lesion was the only culprit lesion and the additional coronary plaques were not clinically significant.

Contact Us
Services & SupportEducation & Training
1Stewart et al J Thorac Cardiovasc Surg 1981 Aug; 82(2): 278-80
The outcomes by Siemens Healthineers customers described herein are based on results that were achieved in the customer’s unique setting. Since there is no “typical” hospital and many variables exist (e.g., hospital size, case mix, level of IT adoption) there can be no guarantee that other customers will achieve the same results.