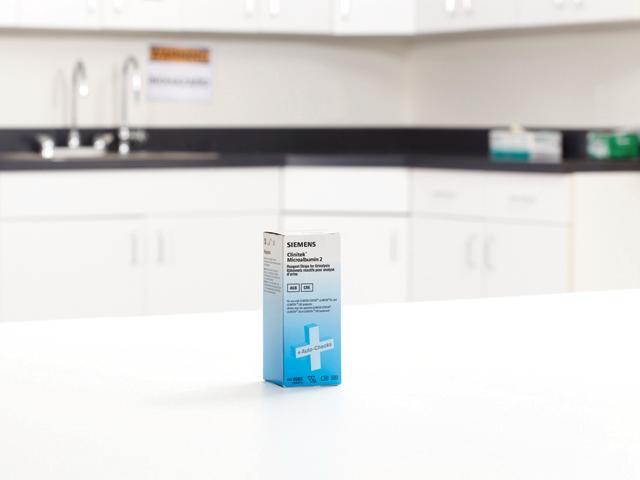 The CLINITEK Microalbumin 2 Reagent Strips are CLIA-waived for use on the CLINITEK 50® and CLINITEK Status Family of Analyzers.

• When the "Select" screen appears, touch the Strip Test screen button.
• To begin testing, remove a reagent strip from the bottle.
• Immediately replace the bottle cap.
• Read Steps 3 and 4 and then proceed with Step 3

• Dip (1) strip in urine sample, wetting all pads.
• Immediately remove strip from urine.
• Drag (2) the edge of the strip against the side of the sample container as you remove it.

• Blot (3) by touching the edge of strip to paper towel to remove excess urine.
• Place (4) reagent strip in channel of table, with test pads facing up.
• Slide or push strip to end of channel. Do not touch the reagent pads on the test strip

• After 8 seconds, test table will automatically be pulled into the instrument.
• When analysis is complete, the "Results" screen will be displayed.
• Touch More to view the second "Results" screen.

When Test is Finished
• Discard reagent strip.
• Wipe table insert with damp tissue between tests to remove any urine residue, if needed.
• Record or print result, and report with Patient ID, as per laboratory practice.