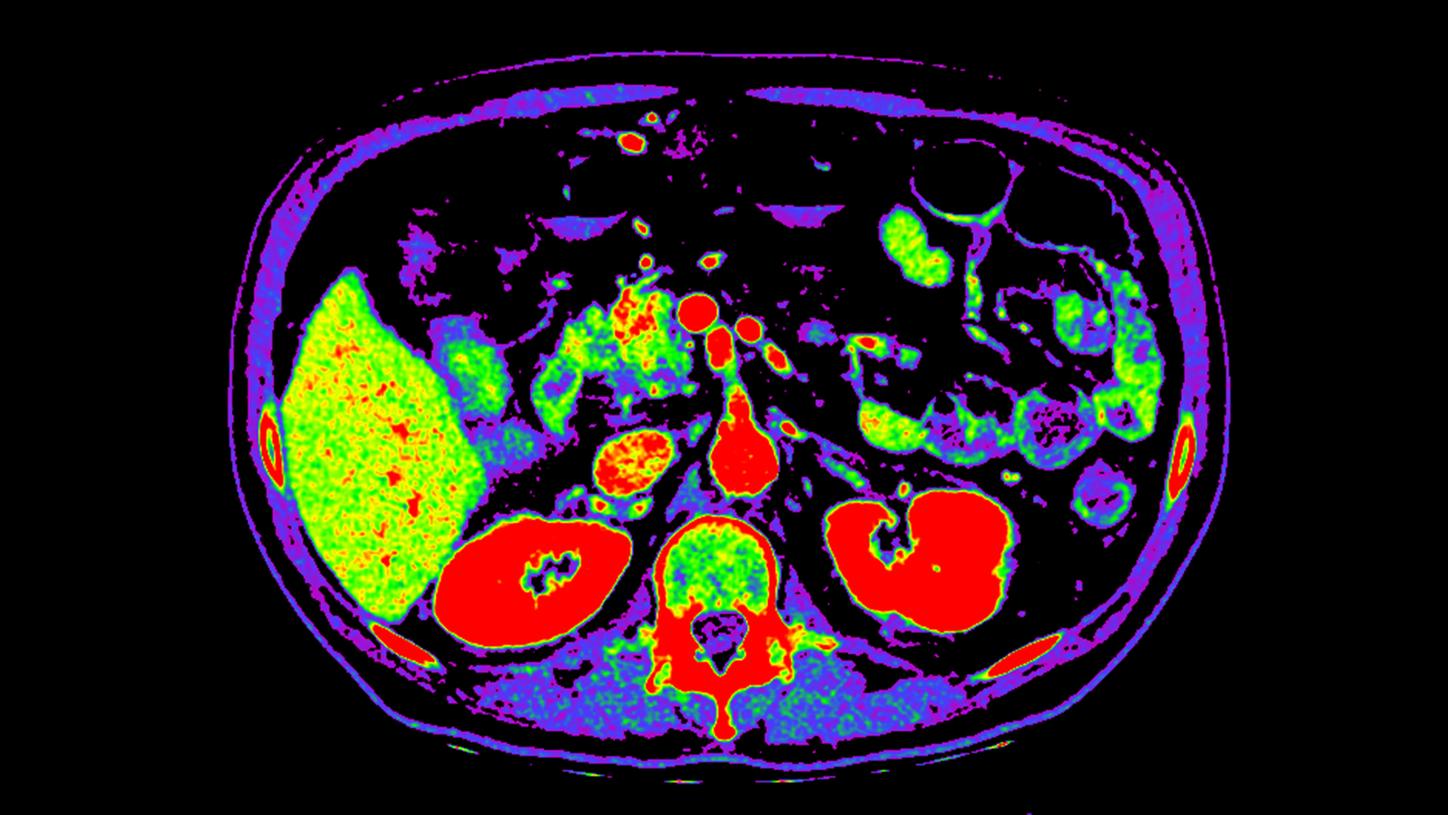 A 67-year-old male patient, suffering from loss of appetite and weight within the last 2 months, came to the hospital for a checkup. His medical history was unremarkable. A Dual Energy (DE) CT was performed to investigate a suspected pancreatic lesion.

DECT images showed an irregular, heterogeneously enhanced lesion in the head of the pancreas, measuring 145.9 HU in density and 4.7 mg/mL in iodine uptake. The image contrast was significantly enhanced using Monoenergetic Plus (Mono+) at 45 keV. The 3D image perspective could be better demonstrated using cinematic VRT (cVRT) for improved depth and shape perceptions. A pancreas tumor was suspected and subsequently confirmed by a PET-CT. A biopsy was performed which revealed a squamous cell carcinoma.
The patient underwent a pancreatectomy, followed by chemotherapy. In a 3-month follow-up, he was in good general condition with improved symptoms.

Fig. 1:
Mixed image (Fig. 1a), Mono+ image (Fig. 1b) and iodine map (Fig. 1c) show an irregular, heterogeneously enhanced lesion (arrows) in the head of the pancreas, with an iodine uptake of 4.7 mg/mL (Fig. 1c), which is almost double that in the adjacent normal pancreatic tissues (2.4 mg/mL). The measurement is normalized to the enhancement of the aorta. The enhancement is significantly improved in the Mono+ image display.

Pancreatic squamous cell carcinoma is an extremely rare subtype of pancreatic cancer of ductal origin. It is characterized by enhancement on contrast CT due to its hypervascularity. The dataset acquired by DECT can be processed to improve the contrast enhancement using syngo. CT DE Monoenergetic Plus, to both present the iodine map as well as to quantify the iodine uptake using syngo.CT DE Virtual Unenhanced. Using cVRT allows a more photo-realistic representation of the CT image data, with an enhanced and more natural depth and shape perception.

Fig. 2:
Quantitative measurements and graphical presentation of the CT attenuation in accordance with energy (keV) levels. Comparing 45 keV with 70 keV, the contrast difference between the lesion and the normal tissue is almost threefold.

Fig. 3:
cVRT image (Fig. 3a) demonstrates a better 3D perspective with improved depth and shape perceptions. A PET-CT image (Fig. 3b) confirmed the lesion in the head of the pancreas.